Right now there is so much going on in Washington that it’s difficult to keep tabs on what’s really important.

For me, the most important event being played out is the fight over the nomination of Neil Gorsuch for the US Supreme Court. Right now, much is being written ab 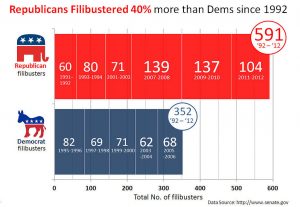 out his qualifications, but although a quick perusal of his record shows there are things to appreciate and to be deeply, deeply disturbed about, I’m not really interested in that for this article.

Rather, my interest in how he ended up being nominated and what can or should be done about it.

The backstory, as I’m sure you all know, is that in February of last year, Justice Antonin Scalia passed away leaving a vacancy on the court. President Obama nominated Merrick Garland, a generally competent and uncontroversial pick. Senator McConnell, a Republican, refused to schedule even a hearing on the appointment, unprecedentedly claiming that we shouldn’t appoint a justice in the last year of a presidency. The seat has now been open for an entire year.

This was an illegitimate move, no matter its legality. What makes it illegitimate is the howl of rage that would have swept the country, the cries for ‘second amendment remedies’ that would have been yelled for if the Democrats had tried to do this to a republican president. It would surely have precipitated a constitutional crisis. Democrats, true to form, complained, whimpered, and bore it.

There may not have been anything that they could really have done at the time to really affect things, but there is now: filibuster.

Then, and only then, will we the people be able to fully see and appreciate who and what the republicans stand for. Let them write tax code to favor wealthy individuals and
corporate interests. Let them repeal ethics laws (1,2). Let fan the flames of Wall Street excess until we have another crash and bailout on the backs of the middle class.

I am no particular fan of the democrats, but there does need to be a healthy tension in the system to keep everyone honest. That tension is gone, and balance needs to be restored. Unfortunately, I now feel that that balance cannot be achieved until we have hit rock bottom and see just how corrupt the republicans in government have become.

I call on the democrats to filibuster, make themselves irrelevant for at least the next two years, and get ready for the backlash that will inevitably follow. And then I warn them not to fall into the same trap as their esteemed colleagues.

On a final note, I would like to remind the readers that despite all the claims of Obama’s illegitimacy, he was born in the US.

Donald Trump was born in the US, but is far from clearly being a legitimate president. Contrary to conspiracy theories that have not been supported by more than 4 cases of voter fraud, won with a deficit of 3 million votes due to the peculiarities of how our presidential system works. He won, but their is no mandate. Further, there is substantial proof that the Russians interfered in the election through hacking and propaganda. Added to that, it also appears that certain elements of the FBI, including Director Comey put their thumb on the scale for Trump.

Well, as is often the case when I go off on political topics, What The Hell Does That Have To Do With Bitcoin?

Easy, and unfortunate. I do not wish for bad luck, but I do prepare for it. We are at a crisis point in history, and I fully believe things will get worse before they get better – Trump is just accelerating a process that was already underway. We are going to see a major crisis in our financial and political systems, and a currency or store of value that is independent of banks and governments is going to become suddenly and supremely relevant when it does. When that happens, people and institutions all over the world will be seeking a safe place for their funds.

You can never tell, and there is no guarantee that Bitcoin won’t fail, but it’s also survived for 8 years so far, enduring some existence-threatening crises, and looks to be stronger than ever. A small purchase now might be the best purchase you’ve ever made.