It’s a funny thing. You would think that Bitcoin would offer something of interest for those on both the right and left side of the political spectrum. It is a money that returns 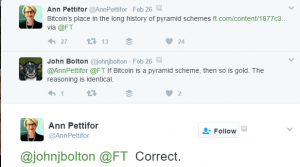 financial control to the hands of the people, removing the need of banks or governments to create or secure it. Since it is finite, it rewards workers and savers, while penalizing debt financing. It would end the cycle of financing waste and wars on the notion that the debt incurred today can be paid back for less in the future because money will be worth less.

And yet, Bitcoin has been attacked savagely from the right and the left.

Up today is Lynda Pettifor, A UK economist who rails against the roll big banks play in the pauperization of the world populace to the benefit of a rarefied 1%.

A few days ago video was posted on Business Insider that details why she thinks that Bitcoin is bad. Interestingly, the video itself is not cut like a news piece, it is cut like a commercial, complete with floating words and scary imagery to prick the lizard brain into a primal fear of this new digital asset.

This video may indeed show what Pettifor thinks of Bitcoin, but is not a scholarly work, it is a hit piece, pure and simple – and not worthy of a person who proclaims herself to be a scholar.

The piece is not long, so we can parse what she had to say:

Bitcoin was invented by some big, bad guys on the dark web as a kind of secret currency for which they could use to exchange goods and services.

Good: It is a currency created to exchange goods and services.

Bad: It was created by some big bad guys. … What? Exactly how are they big or bad? Satoshi Nakamoto, whether one person or a group, created Bitcoin, worked on it for a number of years, and walked away. There are thousands of coins that are thought to belong to Satoshi, but have not moved since they were mined, though they would be worth many millions. Profit does not seem to have been Satoshi’s primary motive.

And ‘secret currency’? It’s not exactly secret. I have a website dedicated to its promotion. And although Bitcoin is pseudonymous, meaning that there is no name printed on side of each Bitcoin wallet, it is also not anonymous. Actually, since financial privacy has not been my own primary aim, if the IRS or someone else wanted to know what I do with my bitcoins, it wouldn’t be hard to track them down. Start with the QR code on my donate page, find Bitcoin addresses closely linked to that address, and voila! You have me! It was for this reason that when Coindesk printed this article stating that the Danish police had found a way to track Bitcoins, I was surprised that anyone was surprised. It is certainly possible to make Bitcoin transactions more private, and not posting your address on your website would be a good start to that, but Bitcoin is certainly not ‘secret’ by any stretch of the imagination.

Pettifor goes on to talk about how Bitcoin can’t work because there will be a finite number of coins minted:

The problem with a finite asset is that the economy is not finite.  And if you have this finite amount of money to match this almost unlimited capacity of people in the economy to do things, money doesn’t work.

Now there are different ways to look at this one. She is speculating that the value of the dollar (for example) should remain the same, and the number of dollars printed should be increased to match the current rate of economic activity.

But how do you actually determine how many dollars need to be printed. And how to account for inflation? And if Pettifor is really a progressive she should realize that inflation is an invisible tax on the poor – sapping their wages and savings.

In fact, Pettifor has it exactly backwards. You don’t have to have a money that can be infinitely increased, you should have a money that is infinitely divisible. As the economy enlarges, smaller units of the money can be used to purchase things – also known as deflation. Deflation is typically seen as an evil by governments and corporations which rely on debt financing and inflation to keep themselves stable. For you and me, though, a deflationary currency would be far better. And in the long run, it would make for a far better, more beneficial economy.

Money works fine in a deflationary economy – it just doesn’t work for the wealthy as well (but it does even work for them!)

Bitcoin doesn’t allow economic activity to take place on the scale that we want it to be.  It is too volatile to be useful.

Now this pair of statements is particularly telling because they contradict each other. Bitcoin currently does not allow economic activity to take place at scale, because it needs to scale up tremendously before it can do so. When it hits a multi-trillion dollar market cap (at which point dollars will be valued in Bitcoin and not the other way round), it will certainly allow that activity, but the monetary model will need to be deflationary and not dependent on fractional reserve banking.

The other statement, that Bitcoin is too volatile. just feels like a potshot at this point as it’s been made by everybody and his brother at this point. Of course it’s volatile. And it will continue to be volatile. Until it rises in value to the point where it’s value is buoyed by substantial economic activity. Volatility is not Bitcoin’s death knell, it is its birth pangs.

It’s a bit like a ponzi scheme. If you got in at the beginning, more suckers got dragged in, the price goes up, they sell at the top, when the thing crashes down, there are a lot of losers.

Let’s be absolutely clear that Bitcoin is still an experimental financial instrument, and until it achieves a ‘we can’t be without this’ status, it will continue to be so. There is absolutely the chance that Bitcoin could fail, be overtaken by a rival, or be crushed by overbearing regulation. I don’t think it will, but it’s the risk you take when you start investing in it.
What Bitcoin isn’t, is a Ponzi scheme. If it is, then any investment with the chance of failing is as well. Bitcoin has the chance, maybe just a chance, but a chance to change the world. And the world is desperately in need of changing. So, Ms. Pettifor, that’s a chance I’m willing to take