Crediting has always been a crucial thing for many businesses owners and the economy of developed countries in general; at the moment, cryptocurrency scene is coming up with similar projects, which most likely going to be extra-important in further development of fintech segment and blockchain technology as a whole.

The next big thing in the crediting field is crypto-backed loans. Cryptoassets leveraging has proven to be a convenient financial tool for all token holders who don’t want to give up their assets.

Now, imagine if you had 1 BTC and wanted to purchase a new laptop.

You are pretty sure that Bitcoin will grow, and therefore do not  want to sell it, as that would mean losing a valuable investment.  So, you take a loan for 800$, depositing 1 BTC as a collateral, and buy yourself that laptop.

What do we have in the end? Not only have you bought a laptop, but also saved your Bitcoin and ultimately received ~$4K profit from collateral growth.

There are about 6 most prominent lending platforms that use cryptocurrency as a collateral and give out credits in fiat money – Salt (saltlending.com), CoinLoan (coinloan.io), MoneyToken (moneytoken.com), Karma (karma.red), Biterest (biterest.com) and Ripio (ripiocredit.network). I`ve come up with several criteria to compare them by: 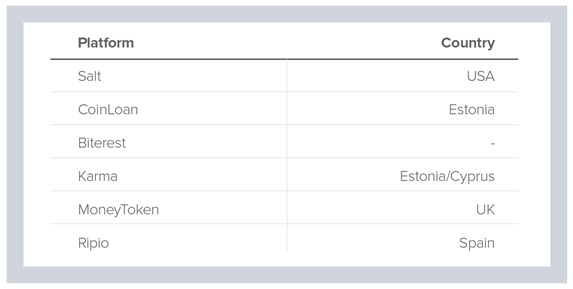 Analyzing the country of registration may seem far-fetched at first, but different regions have their own regulations towards the emerging cryptocurrency scene. Since Salt and MoneyToken are registered in the USA and UK, these projects will have to go through tons of verifications and audits, as well as complicated legalization processes. Spain (Ripio) is considered to be reliable enough in terms of legal regulations, but we`ll have to see. However, Estonia (CoinLoan) and Cyprus (Karma) are well-known for their lenient legal system, which makes it significantly easier to obtain any required documents and successfully go through verification. Whether those projects went “the easier way” to save finances and time for the development of the actual platform, or to create themselves some leeway for questionable operations cannot be determined just yet. I haven’t found the country of registration for Biterest, so feel free to mention it in the comments.

Date of the launch 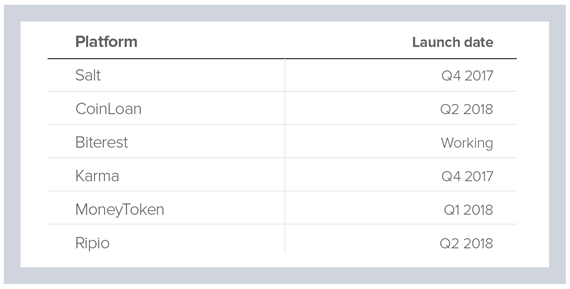 It`s important to note the launch date of the platforms, since having a head-start in this industry is a definite plus. It`s not the determining factor, but we all know that most well-known platforms like Facebook or Google were the pioneers in their respectful spheres. Among all of these projects, Biterest is the only one that has a working platform, even capable of giving out small loans at the moment. Both Salt and Karma have announced that the launch was planned for November 2017, but re-appointed it to the very end of the year, which is kind of alarming, since Salt has successfully completed their ICO in August 2017. MoneyToken is planning to launch in Q1 2018, and the date of ICO hasn`t been set yet, which may mean that they`re aiming to go into ICO with the finished and somewhat operating platform. Ripio and CoinLoan are launching in Q2 2018, while Ripio have successfully finished ICO, gaining about $37,000,000, and CoinLoan started their ICO a few days back. 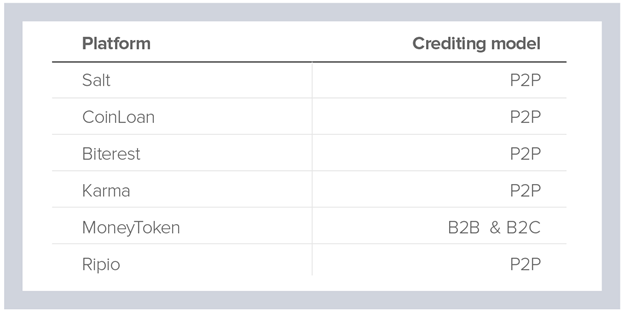 In their crediting model, all of them are pretty similar, with the exception of Money Token, in which the platform is the loan supplier, and cryptobusinesses seem to be the target audience. Other platforms serve as an intermediary between loan suppliers and borrowers, catered towards the larger consumers market. Karma has about 8 positions on their platform: loan suppliers, borrowers, collectors, indemnitors, scoring agents, security agents and lawyers, which would allow users to create a whole community, where each person is assigned to a different role – seems like an interesting model, although the realization might turn out to be questionable; plus, it really does resemble a decentralised bank, which is the very opposite of what tokens stand for in the first place. Salt, CoinLoan and Biterest act as platforms that mostly have 2 positions: loan supplier and borrower. Rippio will additionally have scoring and security agents, which leaves them in the middle between Karma`s multirole model and two-position system that others have.

All platforms, besides Salt and MoneyToken, allow anyone to become a loan supplier, after finishing KYC and proving to be capable of giving out the money. The conditions of time limits, rates in interest and scoring vary from platform to platform, but all in all are pretty similar. In the cases of MoneyToken and Salt, to gain the ability to give out loans, you need to “buy” it with token, while the former is planning to use their own credit fund money to begin crediting, allowing outside partners to become loan suppliers and take part in the development of the platform later on. To become Salt`s loan supplier, on the other hand, you need to be a USA accredited investor or successfully finish the platforms accreditation system. Becoming a borrower on all of the platforms is possible only after finishing the KYC, in some cases – after the scoring process and depositing a collateral in token. However, Karma allows clients to get loans without the collateral or even without a set repayment period, which definitely makes them stand out among others.

According to the collateral conditions, all platforms expect to receive cryptocurrency as a security deposit, except for Karma – they can give out loans without any collateral. Ripio has a security agent who insures that the loan supplier gets their money back, using the local legal system. Karma has many roles on their platform, each of whom insures their own percentage of the loan or enforces the repayment of the credit sum as a collector.

Concerning the rate in interest, all of these P2P platforms are similar. Loan suppliers lay down their conditions, while the borrowers choose the one that`s more convenient for them. Alternatively, the borrowers state the terms on which they`re ready to get the loan, and the loan suppliers then choose the most appealing entries.

Each of these platforms claim that they’ll have the lowest rate in interest to attract clients, but this might not be the way to go when trying to attract the loan suppliers.

All in all, my impression is that the P2P crediting models that require scoring, where the risks lay on the loan suppliers` shoulders, are very questionable, since this very system in fiat economy has proven to be less than ideal (low percentage of collateral returned). If these guys will manage to create the system in which the percentage of repaid credits totals to over 50%, it could be considered a success. For that to happen, Karma`s collector and Ripio security agent systems will need to work perfectly. The crediting models with a required collateral seem more trustworthy, and the cryptocurrency seems more convenient as a security deposit than gold, gadgets or real estate. According to the platforms` conditions, risks rise when the value of the collateral, like BTC, rapidly falls by more than 60% in total. Among all of the platforms with a collateral required, Salt seems the most straight-forward, but it seems like it will only be available to the residents of the US. Biterest is interesting in that they already have a working product, so the public can already get some hands-on knowledge of how it operates. MoneyToken is the one that seems the most mysterious at the moment, with their reserve fund, fluctuation security and all that – we`ll have to see how they manage to bring that to life.

It will make sense to repeat this kind of brief analysis after a quarter, when most of the platforms have already been launched.

What is your opinion regarding this “crediting trend”? Which of these seems more adequate?