Chinese regulatory authorities imposed a ban on initial coin offerings (ICO) in September 2017, forcing all crypto asset (cryptocurrency) exchanges to close business. Yuan-denominated Bitcoin (BTC) trading was considered to have accounted for over 90% of all transactions before and during September 2017.

While there has been no open data, such as on yuan-denominated trading, in the global cryptocurrency exchanges since the regulatory ban, yuan-denominated BTC trading can be seen on peer-to-peer (P2P) trading platforms, including LocalBitcoins. Because traders are able to overcome access controls imposed by regulatory authorities on cryptocurrency-related websites using such means as virtual private network (VPN) connections, China money is believed to have remained in the cryptocurrency market. Therefore, I compared the market capitalization of BTC with the amount of change in the BTC price from the previous quarter with errors and omissions in China’s capital balance as a surrogate variable for capital outflows. 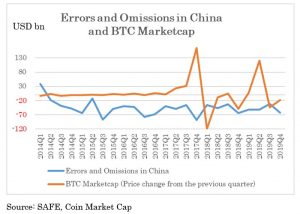 While some argue that changes in foreign reserves represent capital inflows/outflows, a comparison of month-to-month change in China’s foreign reserves with the amount of change in the market capitalization of BTC identified no expected correlations between the two. Monitoring capital inflows/outflows in China and cryptocurrency market trends may continue to provide a clue to predicting market moves without regard to the easing of cryptocurrency regulations in China.

※This article was written by FISCO.