Major averages hit both all-time intraday and closing highs on Thursday (Dec. 17), riding on vaccine optimism and hopes that a stimulus package could be passed in a matter of days.

While sentiment has been positive over the last two trading sessions, there will still be a short-term tug of war between good news and bad news. It’s quite simple really – until a stimulus is passed and the virus is somewhat brought under control, there will be negative pressure on the markets. Even though a stimulus package passing appears to be imminent, time is running short and we may be at a fork in the road.

For now, though, hopes that a deal could pass through are sending stocks higher.

“Stimulus is still the main driver in the market right now until they get something done, and it does appear there is some motivation on that front to get something done,” said Dan Deming, managing director at KKM Financial, further stating that “the market’s benefiting from that (enthusiasm).”

Additionally, Luke Tilley , chief economist at Wilmington Trust, said that another stimulus package was needed to keep the economic recovery from stalling before the mass distribution of a vaccine.

“With the continued rising cases and mass vaccinations still a ways out, we could see some further weakness in jobs and even a flattening where we’re not even adding jobs at all … that’s absolutely a possibility for this next jobs report,” Tilley said. “And if we were to not get another stimulus package, you’re going to have 10 to 11 million people fall off the unemployment rolls right away, and that would hit spending as well.”

The overwhelming majority of market strategists are bullish on equities for 2021 though, despite near-term risks. While there may be some semblance of a “Santa Claus Rally” occurring, the general consensus between market strategists is to look past the short-term pain and focus on the longer-term gains. The mid-term and long-term optimism is very real.

“I am pretty bullish on the second half of next year, but the trouble is we have to get there…As we all know, we’re facing a lot of near-term risks. But I think when we get into the second half of next year, we get the vaccine behind us, we’ve got a lot of consumer optimism, business optimism coming up and a huge amount of pent-up demand to spend out with very low interest rates.”

In the short-term, there will be some optimistic and pessimistic days. On some days, the broader “pandemic” market trend will happen, with cyclical and recovery stocks lagging, and tech and “stay-at-home” stocks leading. Sometimes a broad sell-off based on fear or overheating may occur as well. On other days, there will be a broad market rally due to optimism and 2021-related euphoria. Additionally, there will be days (and in my opinion this will be most trading days), when markets will trade largely mixed, sideways, and reflect uncertainty. But if we get an early Christmas present and a stimulus package passes, all bets are off. It could mean very good things for short-term market gains.

In the mid-term and long-term, there is certainly a light at the end of the tunnel. Once this pandemic is finally brought under control and vaccines are mass deployed, volatility will stabilize, and optimism and relief will permeate the markets. Stocks especially dependent on a rapid recovery and reopening, such as small-caps, should thrive.

Due to this tug of war between sentiments though, it is truly hard to say with any degree of certainty that a correction will happen or more record high rallies will occur.

While there is long-term optimism, there is short-term pessimism. A short-term correction is very possible, but it is hard to say with conviction that a big correction will happen.

The premium analysis this morning will showcase a “Drivers and Divers” section that will break down some sectors that are in and out of favor. As a token of my appreciation for your patronage, I decided to give you a free sample of a “driver” and “diver” sector. Please do me a favor and let me know what you think of this segment! I’m always happy to hear from you. 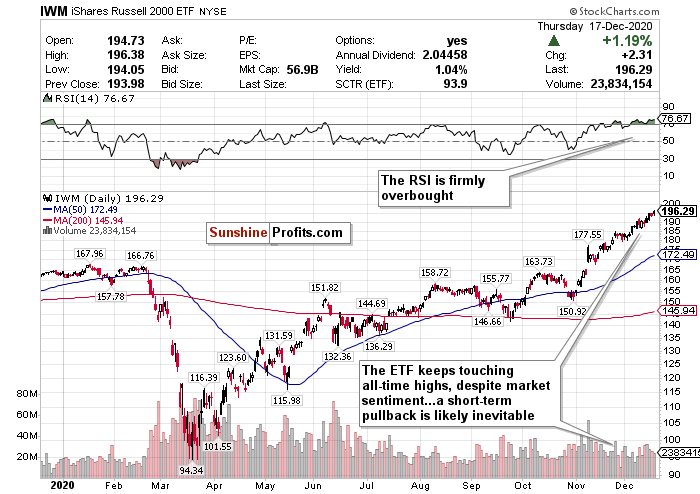 In typical fashion, the Russell 2000 small-cap index once again beat the other indices and gained 1.30% on Thursday (Dec. 17). I truly love small-cap stocks in the long-term and this small-cap rally is more encouraging than the “stay-at-home” stock rallies from April/May. This is a bullish sign for a long-term economic recovery and shows that investors are optimistic that a vaccine will return life to relatively normalcy in 2021.

I do have some concerns of overheating in the short-term however, especially with the headwinds that still exist. The Russell keeps outperforming no matter what the market sentiment of the day or week is. For example, although the week ended December 11th was an overall down week, the Russell 2000 STILL managed to outperform the larger indices and eek out another weekly gain of 1.02%. While it is remarkable, I do not see how this is sustainable in the short-term.

The performance of the Russell 2000 index since early November has been nothing short of staggering. Although the Russell index is composed mostly of small-cap value cyclical stocks dependent on the recovery of the broader economy, and may be more adversely affected on “sell-the-news” kind of days, its hot streak since November has not cooled off in the slightest.

Since the start of November, the Russell 2000 has skyrocketed and considerably outperformed the other major indices. The iShares Russell 2000 ETF (IWM), in comparison to the ETFs tracking the Dow (DIA), S&P (SPY), and Nasdaq (QQQ), has risen 28.62%. This is at least 13% higher than all of the other major indices. Since the start of December, the Russell ETF has also outperformed the other ETFs between 4%-5%.

However, when looking at the chart for the Russell 2000 ETF (IWM) , it becomes pretty evident that small-cap stocks have overheated in the short-term. These are stocks that will experience more short-term volatility. Stocks don’t always go up but the Russell’s trajectory since November has been essentially vertical. The IWM ETF keeps hitting record highs while the RSI keeps overinflating way past overbought levels. I would SELL and trim profits for the short-term but do not fully exit these positions. A stimulus could be imminent and send these stocks soaring more. But if there is a pullback, BUY for the long-term recovery. 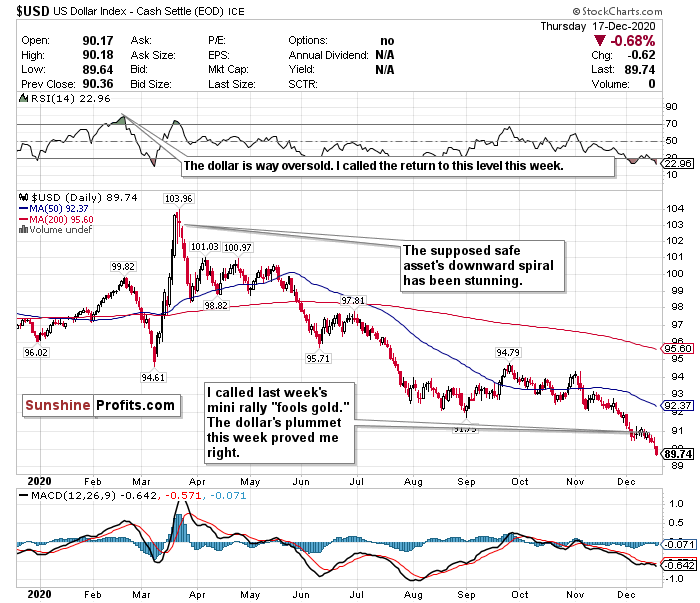 The U.S. Dollar’s plunge continues to its lowest levels in years. I called the return to oversold levels this week despite the currency piercing the 91-level last Wednesday (Dec. 9). I knew it was “fool’s gold” and not the sign of any sort of breakout. I have been calling the dollar’s weakness for weeks despite its low levels, and I expect the decline to continue.

For the first time since April 2018, the world’s reserve currency is now trading below 90.

Why did the dollar plunge so much on Thursday (Dec. 17)? You can thank the Fed! After the Federal Reserve’s dovish tone and reassurance on Wednesday (Dec. 16) that it won’t be soon tapering its bond purchases, bearish traders took this as a sign to continue selling the dollar.

“The latest blow to the dollar came from the Fed, which vowed not to touch policy even if the outlook for the U.S. economy brightens as it now expects,” said Joe Manimbo , senior analyst at Western Union Business Solutions.

After hitting a nearly 3-year high in March, the dollar has plunged in excess of 13%.

Meanwhile, other currencies continued strengthening on Thursday (Dec. 17), relative to the dollar:

After briefly rising above an oversold RSI of 30 last week, the dollar’s RSI is at an alarmingly low 22.96. The dollar is also significantly trading below both its 50-day and 200-day moving averages.

Many believe that the dollar could fall further too.

If the world returns to relative normalcy within the next year, investors may be more “risk-on” and less “risk-off,” meaning that the dollar’s value will decline further.

Additionally, because of all of the economic stimulus and seemingly imminent additional stimulus, the dollar’s value has declined and could have more room to fall. With a dovish Fed and record low-interest rates projected to remain this low for at least another two years, the dollar may not appreciate again for a very long time.

While the dollar may have more room to fall, this MAY be a good opportunity to buy the world’s reserve currency at a discount – at least for a quick short-term trade. The low RSI reflects this.

But I just have too many doubts on the effect of interest rates this low, government stimulus, strengthening of emerging markets, and inflation to be remotely bullish on the dollar’s prospects over the next 1-3 years.

For now, where possible, HEDGE OR SELL USD exposure.