Already, this isn’t very clear because all the three models mentioned above – including sharing economy – are used interchangeably in most places today. But WEF insists that the sharing economy entails the “sharing of underutilized assets… in ways that improve efficiency, sustainability and community.”

Contrariwise, the gig economy – which many people associate with sharing economy –entails generating income via gigs. Gigs are single tasks or projects whose completion does not need long hours. The on-demand economy, on the other hand, revolves around immediate access to goods and services.

Do people understand what the sharing economy is? A 2015 PwC survey sought to answer this question. In the study, 56% of US consumers were not familiar with the sharing economy concept. Interestingly, it would not be surprising to find out that a sizable number of 56% have used the services of Airbnb, Uber, SnapGoods, and Spotify, among many others.

How Big is The Sharing Economy?

A 2013 PwC analysis valued the sharing economy at $15 billion. At the time, few businesses were utilizing the business model. By 2015, the Wall Street Journal valued Uber at $50 billion and Airbnb at $24 billion. A year later, Statista revealed that 44.8 million adult US consumers were part of the sharing economy. By 2021, as per Statista, more than 86.5 million US adults should be using sharing economy services. 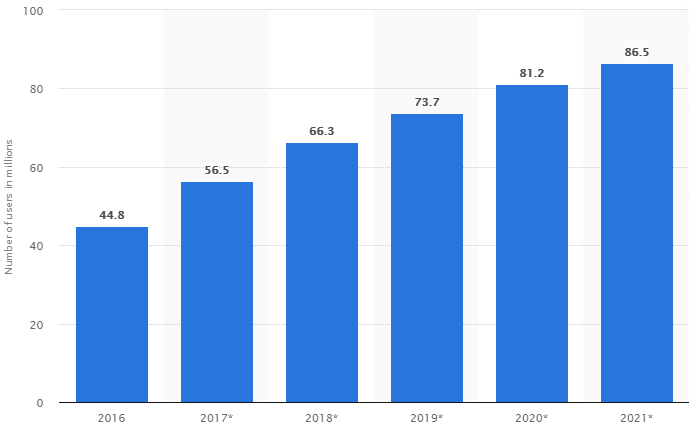 According to the PwC analysis, the sharing economy should account for half of the revenues ($335 billion) in five business sectors by 2025. The sectors include crowdfunding, online distance work, car sharing, customer-to-customer (C2C) home-sharing, and online video and music streaming. 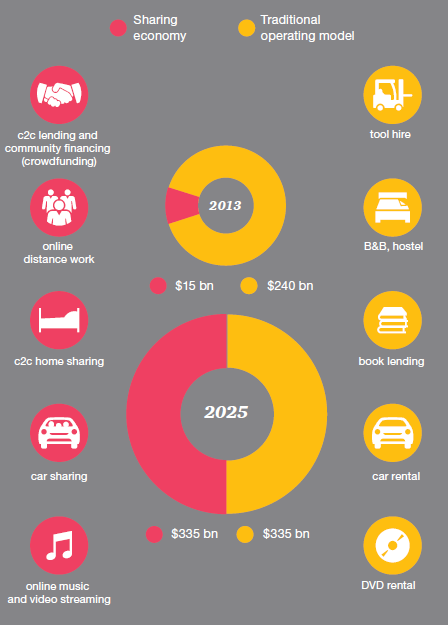 The Promise of The Sharing Economy Business Model is Conflicting

A few of the sharing economy businesses have grown fast. By 2019, Uber and Lyft – both operating in the car-sharing segment –were ready to go public. Before making the IPO application, Uber’s valuation was $120 billion, while Lyft fetched $15 billion.

Nevertheless, the promise of the sharing economy model seems to favor some businesses over others. In the same year that Uber and Lyft were eyeing record-breaking IPOs, a bike-sharing startup in China was on the verge of collapse. Ofo, a Chinese-based and Alibaba-backed sharing economy startup, was experiencing “immense cash flow problems” as reported by the Financial Times.

But as Uber boisterously marched toward its financial targets in readiness for the IPO, its drivers were anything but happy. For starters, the new economy model defined workers on its platforms as “independent contractors.” This way, Uber was not under obligation to observe minimum wage guidelines. Neither was Uber’s workers eligible for overtime and compensation insurance.

Is Blockchain The Emancipator of The Sharing Economy Workers?

One of the major promises of the sharing economy was that it would put workers in control of their time. Besides, workers hoped to get value for their labor, which is alien in the classic economy. But as Uber and other major sharing economies, businesses like Airbnb continue to dominate the scene; their behavior is tending towards that of classic business models. By all intents and purposes, this goes against the definition of the sharing economy.

To bring fairness in the sharing economy, blockchain could be the way to go. Blockchain technology enables users to interact on a peer-to-peer basis. The technology provides a framework where developers create decentralized applications (dApps) to facilitate P2P interactions. P2P interactions are less sophisticated and entail fewer costs and little or no commissions.

TimeCoinProtocol (TCP) is a prime example of what blockchain is capable of doing to shake up the sharing economy. The blockchain-based protocol has a unique architecture on which one can create dApps for various use cases. A Cointelegraph article described the protocol; thus, “TimeCoinProtocol, which has been built on the EOS blockchain, aims to offer more competitive fees than centralized rivals and eliminate opacity.”

The classic sharing economy obligates the supply and demand sides to interact via a monopolistic platform. In the process, a platform such as Uber eats a piece of each side’s earnings. The users can transact without high commissions through TimeCoinProtocolt. To do so, users create “time tickets” that other users can buy. A time ticket is similar to what the classic sharing economy calls gig.