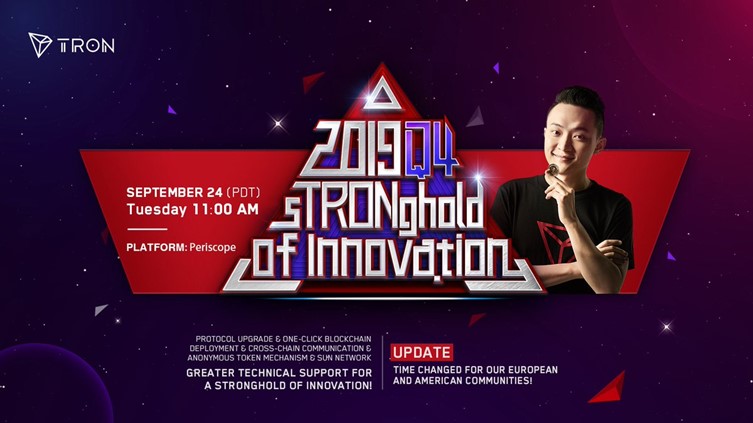 On September 24, Tron founder Justin Sun held an hour-long livestream in which he outlined an ambitious roadmap for the decentralized network. A raft of bold proposals will include new privacy features, increased interoperability, and revised block rewards as part of a redesigned Tron consensus algorithm. In total, five proposals were discussed during the livestream, as Justin Sun outlined the path to a more scalable and open blockchain network that benefits all stakeholders.

Justin Sun may not have rewritten the Tron playbook, but he certainly appended several new pages during Tuesday’s livestreamed event. Much of Sun’s airtime was devoted to the changes to the Tron protocol, where there was a lot to fit in. Version 3.6.5 will sport a revised delegation mechanism that moves from DPos to a hybrid version of DPoS and PoS that’s designed to improve governance and increase incentives for participation. Formerly, only super representatives earned staking rewards; now anyone who stakes is eligible for a share.

This will be achieved by halving the TRX available for each block generated by a super representative, from 32 TRX to 16. In an accompanying blog post, published shortly after the livestream wrapped up, the Tron Foundation wrote: “We welcome more exchanges, TRON partners, wallets, staking mining pools and community members around the world to run for TRON Partners.”

The other big news that Justin Sun broke concerned Tron’s take on interoperability. Improving inter-blockchain communication is a major trend right now, and Tron has formulated its own solution to this challenge. It involves utilizing a series of parachains that are supported by the Tron relay chain while retaining full autonomy, right down to operating a proprietary consensus mechanism if desired.

Sun then threw a new acronym into the mix – IPO. Not an initial public offering, but rather an initial parachain offering. Essentially, a finite number of parachains will be made available, with public chain projects required to stake a certain number of tokens to qualify. If they can’t meet this threshold, they can elect to crowdsource tokens from the public through an IPO. Justin Sun suggested that there is the prospect of some of the mooted IPOs being conducted on established cryptocurrency exchanges.

Enhancing privacy is a key commitment of most major crypto networks these days, with Litecoin, Bitcoin, Ethereum, and Bitcoin Cash all seeking to bolster privacy through proposals ranging from zk-SNARKS to Schnorr signatures. It was Justin Sun’s turn to talk privacy on Tuesday, with the Tron founder providing a high level overview of an anonymity project that will be implemented in version 4.0 with the goal of making Tron “a strong player in the future privacy coin market.” There will also be initiatives to introduce anonymous smart contracts in a bid to onboard more business users.

With dApp sidechain the Sun Network launching version 1.0 within hours of Justin Sun’s announcement, it’s been a productive week for Tron. Bitcoin’s market crash on September 24, dipping to sub-$8,000 levels, and dragging the rest of the market down with it, prevented TRX from responding positively to the news of Tron’s revitalized roadmap. With a clear timeline in place, however, including a commitment to scaling, better governance and broader community participation, there’s cause for confidence in where Tron is headed from here.