CoinTracking offers investors of digital currencies a useful portfolio monitoring tool. The tool analyzes the price history of over 4,000 crypto currencies, your own trades, profits and losses from the trades as well as current balances. Furthermore, CoinTracking provides a time-saving and useful service that creates a tax report for the traded crypto currencies, assets a 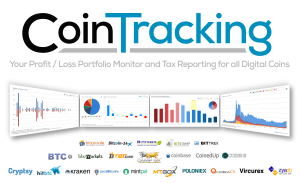 nd tokens. This tax report is applicable for any country on Earth. CoinTracking.info has already been on the market since April 2013 and is constantly being enhanced by Dario Kachel, the CEO & Founder.

The Features of the Portfolio Monitoring Tool

Investors of digital currencies often face the problem of losing track of their coins. This not only is the case for the respective course of the coins, but also for account balances of wallets and the trade history. CoinTracking offers a solution for this. This portfolio monitoring tool is divided into areas for trade imports, coin analyses, trade reports and tax reports, all of which enable the user to have an optimal overview of their portfolio.

Users can import their own trades via a CSV file themselves or have data imported automatically via an API import. New trades are processed and integrated into analysis summaries. In addition to current trades, trade histories from exchanges and wallets can be imported. The tool evaluates data such as coins, trades, fees, account balances and assets and makes them available in the form of interactive charts. This provides the user with an overview of the profits and losses in coin values as well as their own realized and unrealized profits. Trades are also grouped by exchanges and wallets. In addition CoinTracking offers the user the possibility to create public portfolios and share them with other people.

By providing historical data for over 4,000 coins, current prices of those coins, experimental predictions for Bitcoin and a listing of the trendiest coins, measured by trading volume as well as number of trades, users can position themselves favorably in the market. They can execute more mature trading decisions and maximize profits based on those analyses. The unique feature, however, is the tax calculator. It has modifiable parameters for every country on earth. The tax calculator utilizes the commercially available LOFO, LIFO, HIFO and FIFO methods and automatically creates a capital yield overview. In addition, all values for tax advisors and financial offices are prepared in the form of a tax report.

Overall, the tool is suitable for four target groups. The first target group consists of coin holders who have a small amount of coins and want to track the Fiat value of their own coins. They can use the base package of the platform for free. This package includes an integration of 200 trades. The compilation of a tax report is not included.

A second group is comprised of experienced traders. They can use the tool to get an overview of the exchanges they trade on, to analyze their trading history and to generally save a lot of time. For them, a pro account is most suitable. The pro account has a term time of one to two years and costs between 0.02 BTC and 0.03 BTC. Up to 3,500 trades can be analyzed via the pro account. For 0.05 BTC, the term limit of the pro account can be voided.

The third group target group are trading bot developers. They can use CoinTracking to test the success rate of their bot algorithms, which run several thousand trades per day, thus increasing the effectiveness of the bots. For bot developers, the unlimited package is the best choice. The unlimited package has a term time of one to two years and costs between 0.05 BTC and 0.06 BTC. For 0.39 BTC, the term limit of the package is extended to life time.

The fourth and final group consists of companies that accept crypto payments. They benefit to the highest degree from the automatically generated tax reports.

CoinTracking offers an intelligent analysis of personal trading data. Users of the tool can import trades from over 40 exchanges. This portfolio monitoring tool also enables profit and loss projections of owned coins before they are sold and provides an insight into the history of all coins that can be traded on the digital currency markets. In addition, trades can be divided into different types, such as revenue, mined coins, donations or stolen coins. A very interesting feature is the data processing into a tax report for the profits and losses of your trades.

Receive 10% off the regular price.