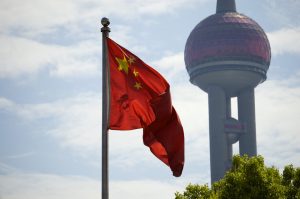 With the world’s largest population and a rapidly-developing economy, China is perhaps the most important country for the long-term prospects of cryptocurrencies such as bitcoin. China’s low energy costs have made it the world center of bitcoin mining, but the government’s uneven stance toward this new technology has caused massive fluctuations in bitcoin’s value.

On September 2, 2017, bitcoin hit an all-time high of $5,000. The price tumbled almost immediately, then collapsed to $3,018 on September 4 as China announced it was banning all initial coin offerings (ICOs) and suspending trading on all bitcoin exchanges.

While many observers initially thought China’s new stance might mean the long-predicted bursting of the bitcoin bubble, its value recovered quickly and began trending upward again immediately after the dip. Some believers in bitcoin’s potential to become a truly borderless currency beyond any government’s control cheered this development, thinking that China had shown they held less long-term influence over bitcoin than many thought.

However, the recovery in bitcoin’s price doesn’t necessarily mean that the Chinese government does not influence its value. Instead, it might mean that many bitcoin investors are confident that China is planning to continue supporting cryptocurrency, despite measurements the government has taken against it.

With its unique mix of free-market capitalism and centrally-planned economies, China’s attitude toward bitcoin often seems contradictory to outside observers. Here are the most important things to understand about the Chinese government’s position on cryptocurrencies.

The Chinese crackdown on cryptocurrency in early September 2017 began with an outright ban on ICOs. ICOs had been generating a lot of hype in the financial world, and many investors were rushing to get on board, throwing money at a lot of ICOs with a spray-and-pray strategy. Some of the ICOs will lead to nothing, while others might make huge gains and offset any losses investors make using this haphazard strategy.

This bullish attitude has made ICOs fertile ground for scammers. While initial public offerings (IPOs) of stock are tightly regulated, virtually anyone can set up an ICO with no real business plan behind it. All that’s needed is a white paper outlining plans for the future growth of the company offering the ICO.

The Chinese government isn’t alone in worrying about ICOs. The United States’ Securities and Exchange Commission and the United Kingdom’s Financial Services Authority have both issued warnings that suggest they’re considering applying the same stringent regulations to ICOs that are in place for IPOs.

China, in particular, has seen a lot of fraudulent ICOs being created to scam investors. It, therefore, makes sense that the Chinese government would take the lead in restricting their creation.

The collapse in bitcoin’s value followed the announcement that China’s government was ordering all bitcoin transactions to cease trading. This initially seemed like a death knell for bitcoin’s viability in China. However, the rapid recovery in bitcoin’s value suggests that many investors don’t believe this is the end of bitcoin exchanges in China.

Major Chinese exchanges such as BTCC and ViaBTC announced they would cease operations at the end of September in compliance with the new Chinese regulation. The government then announced that Huobi and Okcoin would both be allowed to remain open until the end of October.

The softer approach to Huobi and Okcoin was attributed to the fact that neither of these exchanges had offered ICOs. They were, therefore, less tainted by the wave of scamming that caused the Chinese government to act.

Rather than eradicating bitcoin trading in China altogether, the Chinese government may be attempting to exert greater control over this burgeoning technology. It’s important to remember some of the massive problems that have befallen unregulated exchanges in the past.

The biggest disaster in bitcoin’s history was the 2014 hacking of Japanese bitcoin exchange Mt. Gox. More than 850,000 bitcoins disappeared from the exchange’s coffers, with a value at the time of $450 million. Bitcoin’s value more than halved as Mt. Gox filed for bankruptcy, falling from a November 2013 high of $1,242 to less than $600 in August 2014.

China’s stance on bitcoin exchanges may be an attempt to bring them under greater regulatory control. A disaster on the scale of Mt. Gox would today create even more damage due to the increased money that’s been invested in bitcoin since then. China’s government could be acting to ensure bitcoin’s long-term viability.

Even at its lowest point following the Chinese regulatory storm in September 2017, bitcoin’s value was still more than double its November 2013 peak. This suggests Bitcoin may continue to show resilience when faced with setbacks.

Although China’s size and enormous investment in bitcoin mining make it one of the cryptocurrency’s most important players, it isn’t the only one. If China abandoned bitcoin altogether, they wouldn’t be able to stop other countries supporting it. In fact, if China completely gave up its dominant position in the bitcoin market, it would be handing a powerful financial weapon to competing countries and getting nothing in return.

As China’s regulatory restriction gathered pace, Japan announced several measures to position itself at the forefront of the cryptocurrency world. On September 13, 2017, Coincheck became Japan’s first fully-licensed cryptocurrency exchange. Around the same time, Japanese ecommerce firm DMM announced plans to open one of the world’s ten bitcoin mining operations. Russia has also been showing a strong interest in bitcoin, with many of the country’s top universities now offering advanced cryptocurrency courses.

In the zero-sum game of international geopolitics, this is something that would obviously benefit China. These quirks of international politics mean that it’s extremely unlikely China will be abandoning bitcoin altogether. Instead, it seems that the country is simply looking to gain greater control over this powerful financial weapon.

Perhaps more than any other country, China is renowned for its drawn-out strategic thinking. Its one-party government protects China from the vagaries of fortune that come with four-year election cycles. The Chinese Communist Party still enact five-year plans for the country’s economic development. China has arguably the longest history of any country on earth. When it comes to cryptocurrency, it seems likely that China is playing the long-term game.

The development of China’s extensive bitcoin mining infrastructure was as much a product of private enterprise as it was some expansive government scheme. However, the Chinese government must surely recognize the huge power they now wield over a technology with enormous and disruptive long-standing potential.

As with any lengthy strategies and decisions hatched within the upper echelons of the Chinese government, it is impossible to accurately predict exactly what the government’s long-term approach to cryptocurrency will be. However, it seems more than likely that there is a long-term plan in mind.

Stan is a VR evangelist as well as the CEO and co-founder of Prosense.tv, a global leader in broadcasting live VR events. On Nov. 3, Prosense will launch its ICO to support the development of ProsenseLive, the world’s first affordable and secure peer-to-peer livestreaming platform for VR content, built on the blockchain.