Bitcoin, if it is nothing else, is a hedge against an uncertain world.

The last time the world faced this kind of crisis, fundamental changes were made to the system, protections put in place, and regulators empowered to make sure the rich didn’t steal from the poor with too much aplomb. That was in 1929. The changes put in place saw a fast rise in the prospects and quality of life of a growing middle class. That trend continued all the way up to the point when Ronald Reagan began to swing the pendulum back in the favor of the 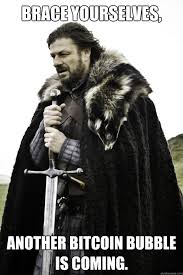 Unfortunately, we were not smart or honorable enough in 2009 to make the same kinds of choices. Rather, bandaids were placed on the problem, no one of significance was made to pay the price for their pilfering of the life blood of regular Americans, and in time, they were all rewarded with with fat bonuses and government jobs – see Steve Mnuchin, a vulture banker who bought up distressed mortgages after the crisis so he could kick Americans out of their houses.

Many of these mortgages were rigged to begin with, and had been sold and resold so many times that when push-came-to-shove, Mnuchin couldn’t even prove that he owned for sure the mortgages he was foreclosing. Didn’t stop him though. When you’re rich and powerful, the law is designed to work for you. Regular people? We wait in line and sweat.

Which brings us to where we are right now: a president embroiled in a continuing scandal involving election interference by a foreign power, Russia, deep connections between individuals in the administration – all the way up to the president himself –  and those self-same Russians, and a plethora of conflict-of-interest business deals that seem to be enriching the president’s family and friends far beyond the great wealth they already have and at the great expense of our democracy, our justice system, and economy.

And that president has just fired the head of the FBI for investigating that very thing – by his own admission and despite his minions trying to spin a very different justification.

There is trouble on the horizon for the US, and by extension, the world. This president will not go quietly, and he will not care what damage he does in his efforts to protect himself. Whether you are Trump, Hillary, or Bernie voter; whether you are a republican or democrat, whether you are Christian, an agnostic, or an atheist – it is time to recognize that things are about to get interesting.

Though Bitcoin has seen a rise from 0 to nigh 2,000 dollars, it is nowhere near its top. There can only ever be more than 21 million coins. Buying one coin, half a coin, or a quarter coin might be the best investment you’ve ever ma
de.