The results are in – The United States of America sent the most money internationally in 2019, with over USD$69 billion being transferred around the world by citizens and businesses for purposes such as overseas investment, paying international workers or supporting family and friends.[1]

Using data from the World Bank, comparethemarket.com.au has created a research presentation that illustrates the world’s 10 largest money transfer senders and recipients of 2019. The data also investigates predictions surrounding how COVID-19 could affect money transfers worldwide, and a country-level breakdown of money transfers per capita.

At less than half the value, Saudi Arabia was the second-largest sender of money in 2019.[5] The $31.2 billion that was transferred overseas was primarily distributed between India, Egypt and Pakistan, among others.[6] Compared to other countries, it is rather cheap to send money out of Saudi Arabia with an average transaction cost of 5.5%, while it can be higher than 27% for countries such as Angola.[7]

Closely behind, Switzerland was the third-largest sender of money in 2019, topping just over $27 billion. In May, the Swiss Federal Department of Foreign Affairs called for countries worldwide to make money transfers easier during COVID-19.[8]

Bringing in the money

When it comes to receiving money, India takes first place after receiving just over USD$83 billion in money transfers during 2019.[10] While India’s intake comes from many countries, most of this figure came from United Arab Emirates ($18.5 billion), United States ($12.7 billion) and Saudi Arabia ($11.7 billion).[11] The World Bank predicts a 22.1% decrease in money transfers across South Asia due to COVID-19, meaning that India’s flow could reduce significantly.[12]

The World Bank anticipates the largest decline in recent history on money transfer habits worldwide as a direct result of the global pandemic.[17] Transfers are expected to drop by an average of 20% worldwide due to the loss of wages caused by lockdown procedures and the ensuing economic crisis. However, this rate could be as high as 28% for Europe and Central Asia.[18] Many developing nations rely heavily on international financial movements and such a sharp drop could prove detrimental for some regions.

Despite the expected drop in money transfer habits worldwide, it is important to acknowledge the benefits of such financial behaviour during this time. Money transfers are a practical way for overseas support networks such as family and friends to provide financial support for those who are struggling, especially those who reside in developing economies.[19] The pandemic has effectively opened economic doors for nations such as Ecuador and Saudi Arabia, where mobile money ecosystems have been developed to support citizens with initiatives such as reduced fees for mobile payments and transfers.[20]

What’s interesting to note is that population does not typically have a direct impact on the amount of money being transferred around the world, nor does each country’s share between cash and card payments. For example, where Germany has the fourth highest population of the 10 countries studied, they have a relatively low transfer rate per capita in comparison. Germany is primarily a cash society with approximately 80% of all payment transactions in cash, which could explain the discrepancy.[21] On the contrary, Luxembourg operates with 64% of payments in cash, yet tops the list with a high value of transfers per person. To demonstrate this, comparethemarket.com.au created a money transfer rate per capita for the top 10 countries sending money in 2019. 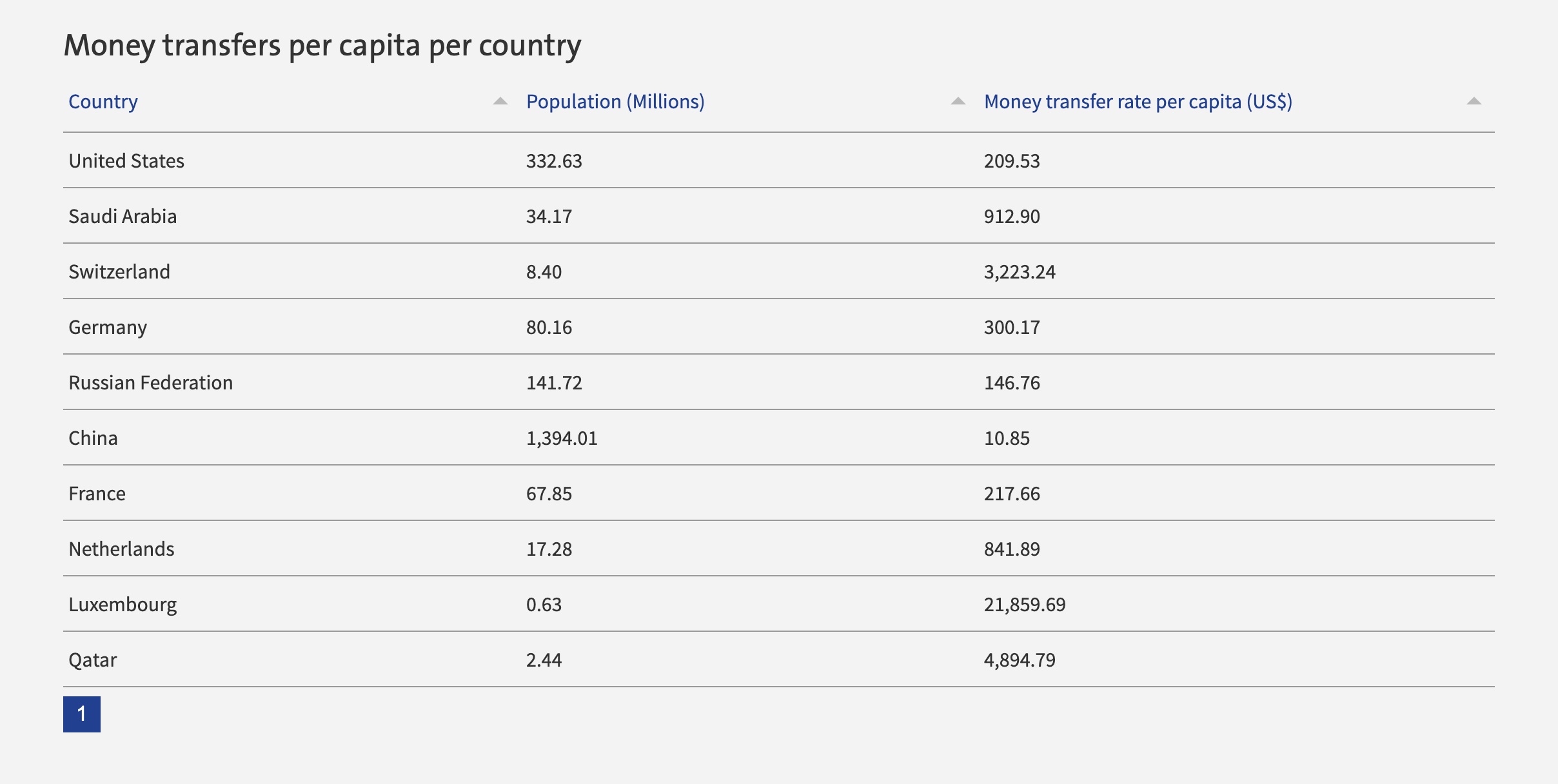 Comparethemarket.com.au is a comparison service that takes the hard work out of shopping around. We make it Simples for Australians to quickly and easily compare and buy insurance, energy, travel and personal finance products from a wide range of providers. Our easy-to-use comparison tool enables consumers to find products that best suit their needs and back pocket.