Since the founding of the nation, a free press has been seen as essential to keeping the people informed and the government honest. The Fourth Estate, although not an official branch of the government, has always been considered to have that key governmental function of keeping our public officials honest through investigation and revelation. 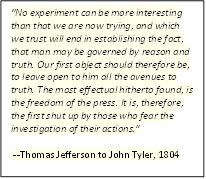 The media has at some points in the nation’s history been better at fulfilling this responsibility than at others. It really came to shine, though, during the tenure of Richard Nixon when Daniel Ellsburg released the Pentagon Papers and Woodward and Bernstein broke the Watergate scandal. These revelations ended an unjust war and brought down a corrupt president.

For the past thirty years, and especially since 2001, the press has been increasingly ineffective at its job, however. News was once provided at a loss by networks as a public service and in return for their use of the public airways. Now, news is commoditized and run as profit centers for news organizations. This changes dramatically what gets aired and how. Which is more important for the public good, the enactment of The Trans Pacific Partnership (TPP) or the birth of a royal baby? Which will get more revenue? The TPP may be dry as dust, but it will have broad effect on every American. The royal baby will not impact our lives at all, but has the kind storybook sentimentality that makes people want to tune in.

I am not suggesting that the royal baby story should be ignored by the media, but I do look for the in-depth stories on the TTP, the Bradley Manning trial, or a host of other topics that should be front page news, and are not. Instead, when not covering “human interest” stories, the media has turned into one pundit after another pushing personal or corporate agendas free of any need to be accurate with their facts. They stir up false controversy and misplaced fear. They distract their viewers from what is really important and create a feeling of helplessness.

There are a lot of reasons for the current state of the media, but suffice it to say that newspapers and networks have long abdicated their responsibility as watchdogs of the government. Too often, they are merely propagandists complicit with government and corporate abuses.

There are remedies, however, and the internet has been instrumental in piercing the veil. Bradley Manning and Edward Snowden are two examples of heroes in the mold of Daniel Ellsberg and Mark Felt. They are arguably even greater heroes given that Ellsberg was vindicated and Felt remained hidden until he revealed himself after a long and distinguished career. Manning was sentenced this week to 35 years, more than many other spies, many of whom had revealed more crucial or damaging information to national interests. Snowden is currently living in exile and unsure of what will happen when his one-year reprieve in Russia is finished.

Both Manning and Snowden revealed information not to harm American interests or to enrich themselves, but because they saw things that didn’t jive with the vision of America that they believed in. They felt that it was their duty to reveal what they knew, even at great personal cost, so that we the people could decide if that information represented the kind of America that we want to live in. And in both cases, good has arguably come from those revelations. Due in part of Manning’s actions, the Iraq war ended earlier than it might otherwise have done and we had a national discussion about whether we as a nation condone torture. Because of Snowden, we are currently having a discussion about how much information the government can and should collect on its citizens.

In both of these cases, Bitcoin has played a role. After the Manning revelations, the US government pressured credit card companies and PayPal to deny payments to Wikileaks. There may be argument about whether Wikileaks is a legitimate journalistic organization, but there is little doubt that the government’s actions were an attempt to silence an uncomfortable voice. There have also been calls for Bitcoin donations to Edward Snowden, including a legal defense fund being collected by Wikileaks.

In a world where the flow of money can be so easily controlled by a government that has vested interests at odds with the good of the people, Bitcoin begins to show its true usefulness. Bitcoin was a lifeline to Wikileaks and may be a lifeline to Edward Snowden; and moving forward there is little doubt we will have to help other organizations and individuals who have transgressed the government in our name.

I have recently had the pleasure of talking with Pete Eyre of Cop Block, an organization dedicated to exposing and reigning in the abuses of our state and local police forces. Despite the colorful name, Cop Block states clearly that they “do not hate cops” but want to “highlight the double standard that some grant to those with badges by pointing to and supporting those harmed.” By highlighting police abuses, Cop Block is fulfilling the Fourth Estate duty to hold those who work in our name responsible for their actions.

Cop Block accepts Bitcoin donations. Because of that, I asked Peter if he would do a short interview with me on the role Bitcoin plays at Cop Block.

Bitcoin Warrior: Why did your organization first start accepting BTC?

Pete: CopBlock.org has accepted BTC since late 2011. After learning a bit about BTC the Bitcoin-QT was downloaded, though now Blockchain.info is utilized.

Bitcoin Warrior: Do you see any risk in associating yourself with BTC?

Pete: Even if BTC as a currency itself fails it has undoubtedly caused many to conclude that alternatives other than FRNs are preferable. When the clout granted to FRNs evaporates, those who claim arbitrary authority over others will lose their grip. Bitcoin is empowering, liberating.

Bitcoin Warrior: A few years ago, Wikileaks had its sources of funding cut off when PayPal and credit card companies stopped processing donations. They circumvented this in part by accepting BTC. Does this inform your decision to use BTC at all and do you see any possibility that your organization might be targeted in the same way due to your activities?

Pete: Wikileaks does excellent work. PayPal usually doesn’t. Bitcoin was an example of a bottom-up solution working to bypass top-down control. No longer can censors so easily silence those who question their authority by cutting their purse strings. That is most certainly a prime motivator for CopBlock.org to not just accept BTC but to advocate to Cop Block groups to create BTC wallets of their own and to pay those who create value for CopBlock.org in BTC.

In a marked divergence from currency controlled by governments and their cronies, the transparency of BTC, in its functionality and in transactions made, coupled with the ability for BTC to be exchanged without the intervention of an uninvolved third party – are attributes conducive to its success.

Bitcoin Warrior: How have the BTC donations been going? Do you feel that accepting them has in any way improved your donation drives?

Pete: CopBlock.org operates on very little funding. Some coin is donated. Other coin accrued is a result of the profit made from items moved through http://CopBlock.org/Store. Some donations to CopBlock.org made in BTC likely wouldn’t have been made were that avenue not available. To be clear – being able to point to a non-credit/debit card donation options is exciting. It’s a sign that the old top-down models are failing. Parallels exist between that and the top-down provision of policing and any other good or service.

Those so-inclined can help us have a bigger impact can donate via the Bitcoin address or QR code at http://CopBlock.org/Donate

Bitcoin Warrior: What do you feel the future of BTC is likely to be?

Pete: Ideally, the future of BTC will be bright. The biggest questions – in my mind – are due to the meddling of regulators, who, unable to directly stop BTC, are attempting to stymie its potential by making it difficult for would-be purchasers to obtain BTC. What is certain is that a fiat currency controlled by a secretive group of individuals will always go to its net worth – zero. Personally, I’m a fan of open banking, and BTC has many attractive characteristics, which are helping individuals safeguard their wealth from the claimed “legitimacy” of an uninvolved third party to steal or regulate its movement while at the same time (BTC is) helping to dissolve arbitrary political boundaries.

Bitcoin Warrior: What do you feel that Cop Block’s two or three most significant successes have been?

Pete: Cop Block is more an idea than an organization. It’s difficult to point to an incident or to objective metrics that showcase the breadth and depth such ideas have spread and are continuing to spread.
One could point to anecdotal examples – the number of groups that have proliferated, the names of individuals from all walks of life who have reached out and are getting involved, or even to the amount of pushback received (which brings to mind the oft-pointed-to statement about knowing one is over the target when they’re getting flak).

Bitcoin Warrior: If Cop Block was widely successful in its mission, how would that affect policing and society at large?

Pete: Cop Block is decentralized, therefore this response is mine alone.

What is government but an association of people who claim the right to initiate force within an arbitrary political boundary? Can someone who claims a right to steal from you truly protect you? Does such an institution create the proper incentives? Can justice and accountability be had through a system founded on violence?

Police today operate in an institution founded on double standards. No matter the oversight or any number of other band aid approaches, one can’t fix a coercive monopoly. If there’s a demand for safety and security it could be better provided via consensual interactions. For more on this angle, I encourage you to search for a video/post “Focus on the Institution”

Bitcoin Warrior: What are the best ways for people to get involved?

Pete: Cop Block is decentralized. Those interested in getting involved are encouraged to do so in whatever capacity they’re most interested. Connecting with people in owns own community makes a huge difference. Those interested are encouraged to contact a group near them (http://copblock.org/groups) or, if there’s not yet one, change that to (http//copblock.org/startagroup). We’re in this together. This is a movement based on love. We seek not to perpetuate the division that categorizes a person as “police” or “civilian” but to make clear that we are all humans and thus all have the same rights.

We are always looking for worthwhile organizations, projects, and people at Bitcoin Warrior. If you have something you would like to share, please contact us at editor(@)bitcoinwarrior.net

This blog is sponsored by Bitcoin PR Buzz: Massive promotion and Press Releases for Bitcoin projects, merchants and businesses