The post When Will The Crypto Markets See An Actual Bounce? appeared first on Coinpedia Fintech News

As the Consumer Price Index for November was announced, the leading cryptocurrencies all surged upward to trade in the green. Due to the major reduction in US inflation statistics, the largest cryptocurrency- Bitcoin- witnessed a major upswing on Wednesday, reaching its highest level in a month. In the last twenty-four hours, Ether has also seen a positive trend as investors’ attention has shifted to the FOMC policy meeting.

The US inflation rate dropped to 7.1% in November, below analysts’ expectations of 7.3%, data showed on Tuesday. Since last December, this month’s inflation rate is the lowest it’s been all year.

The Federal Reserve is widely anticipated to increase the interest rates by a quarter of a percentage point at the conclusion of its two-day policy meeting on Wednesday, signifying a less aggressive stance from the central bank in light of recent data.

The current 24-hour volume of Ethereum trades is $8.3 billion at the $1,323 price. According to CoinMarketCap, Ethereum’s value has increased by about 4.5% in the last 24 hours, reaching a total market capitalization of $162 billion.

Ethereum’s price recently broke through the $1,305 resistance mark, breaking an ascending triangle pattern in the 4-hour time frame. This level is now acting as support. The relative strength index (RSI) and the moving average convergence/divergence (MACD) both indicate a positive outlook.

Smart Contracter, the pseudonymous analyst who accurately predicted Bitcoin’s (BTC) bottom in 2018, now says that Ethereum (ETH) will begin spectacular rallies in 2019 on its way to becoming the largest digital asset by market capitalization. 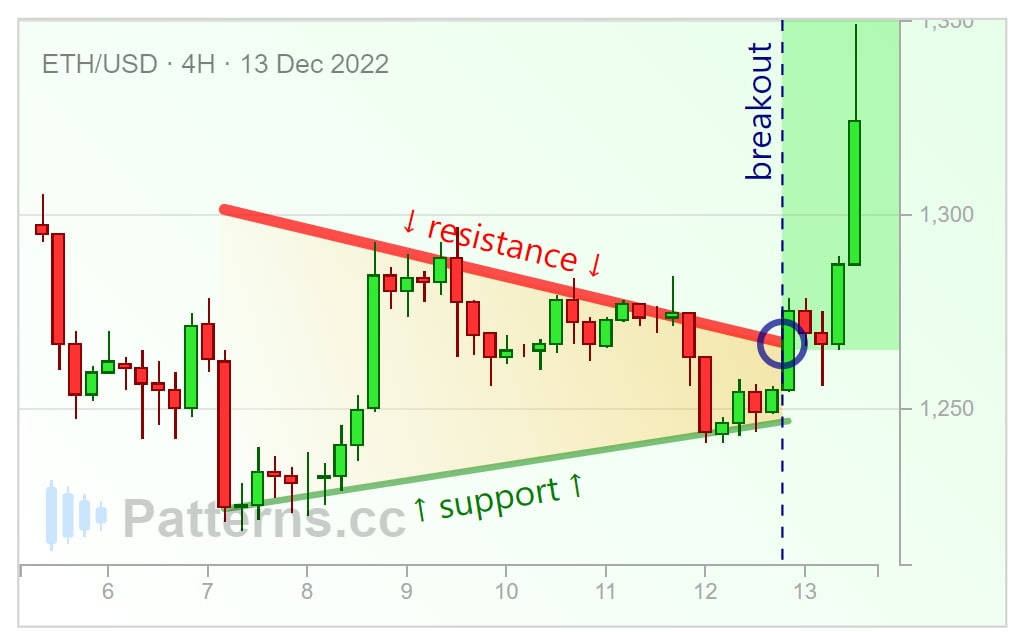 According to Smart Contracter’s tweets to his 216,700 followers, the value of the largest altcoin is likely to reach levels not seen in over five years. Smart Contracter adds that he anticipates that Ethereum will surpass Bitcoin in market capitalization during the upcoming bull market.

It’s worth noting that Smart Contracter is not the only one predicting a price surge for Ether. Mike McGlone, a commodities analyst at Bloomberg, pointed out that the fact that stablecoins make up four of the top five digital assets by volume shows how valuable Ethereum’s technology is. He explains how Ethereum’s technology facilitates instant, low-cost transactions in digital currencies.

Raoul Pal, a former executive at Goldman Sachs, has shared his thoughts on the forecast and analysis of Ether. He claims that there is one chart of Ethereum’s value (ETH) that investors need to keep in mind.

In a recent article, Pal references a chart titled “Ethereum Today vs. 2017-2021 Analog chart”. This chart, if it were to be followed, would indicate that ETH is currently very close to the bottom of the bear market.

The expert is also looking at a chart that, according to him, shows how investors have become quite pessimistic about the stock market.

What Can You Expect In The Future?

The Federal Open Market Committee (FOMC) will have its last meeting of the year later today. As is customary, FED members will share their most recent projections for inflation and interest rates (dot plot) with the public after the meeting.

After the publication of the CPI data, the leading cryptocurrencies, including ETH, BTC, and the rest of the market, experienced an upward trend. It is possible that the same may happen after the FOMC meeting.