The pandemic has changed things irrevocably. Not in the sense that countries are rethinking economic strategies, or in the painful loss of employment for many, but more fundamentally.

People are looking at money and economies differently. With stimulus packages being bandied about left, right, and centre, and individuals generally cynical about the state of economies, they have turned to other assets to hedge against a grim future. Gold and Bitcoin alike have seen much greater investment following the start of the global lockdown.

Millennials have turned to investing to endure a somewhat bleak short to medium-term future. Some of that generation are experiencing their second big economic crises, after the 2008 recession. The particularly enterprising ones will know that the millions in cash being poured into economies are not going to make it easier for them. Inflation is a real threat, and one that we will discuss further on.

But it’s not just financial woes that are attracting investment. The arrival of simplified, intuitive, and user-friendly applications like Robinhood has made it easy for millennials to hop aboard. Technology has played a big part in adoption, and there are signs that it will only continue to do so.

We will discuss all of this and more in the sections to follow. Suffice to say that we have come to a time when it is easy to invest in asset classes while constantly being reminded by external factors that we need to control our finances.

What has the COVID-19 Pandemic Done?

The pandemic has wrought havoc on people’s finances, forcing them to dig into their savings as jobs cut occur with all too much frequency. It has pushed people to the point where they know that all the money they have ever earned may never be safe — a sort of financial existential crisis.

Consequently, there’s been a lot of reshuffling of funds and study into how to protect funds. Stock markets tanked, showing how weak some businesses really were. Already ailing businesses have had to pull the plug, while stronger ones have to deal with a long recovery.

The pandemic has coincided with a burgeoning new asset class, namely cryptocurrencies, which has attracted a broad swathe of investors. The gold market, which lacks the glitz of stock trading, has also shown more interest as fresh investors learn that it is a hedge. In short, there has been a seismic shift in how people view money and investment.

But if there’s one generation that’s really being slapped into seriousness by the COVID-19 pandemic, it’s the millennial gang. There is ample evidence that this group is more interested in cryptocurrencies than other age groups.

Our focus here will be on the factors driving the growth of the cryptocurrencies and the derivatives market due to the pandemic. Why are people considering something they once thought hokey-pokey? 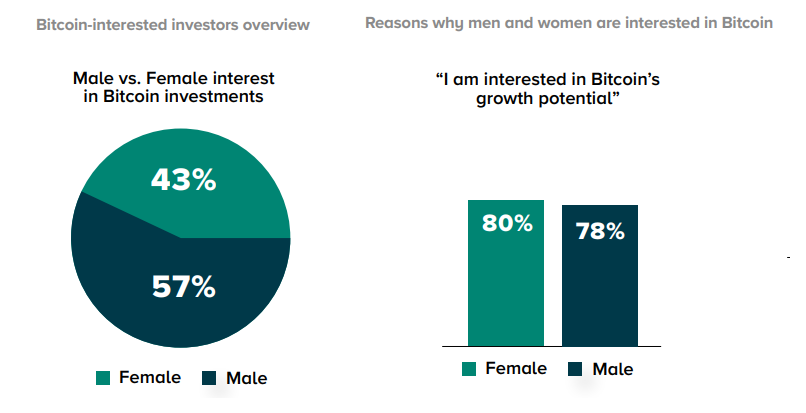 2020 has also resulted in another interesting and significant trend: there has been a considerable uptick in the number of women that have invested in the cryptocurrency market. A report by digital asset management firm Grayscale shows that 43% of investors interested in Bitcoin are women — which is 13% higher than last year.

This will be a telling element of adoption, as so far investors and users of Bitcoin have largely been males of younger generations. The fact that more women are entering the market is a sign of Bitcoin’s strength as a safe haven asset. When asked about why they invested in Bitcoin, they said it was because they believed Bitcoin had growth potential.

In any case, if Bitcoin is growing among the female demographic, then it is a sign that Bitcoin is breaking into the mainstream.

Why are People Taking to Cryptocurrencies?

You would not be questioned for asking why people would be taking to an asset class that is provably more volatile than other classes. Blockchain technology and cryptocurrencies have been lauded for many things; their short and medium-term performances in the market is not one of them.

But you would also be surprised to know that most people are in it for the long-term value as a hedge. The number of people holding onto their Bitcoins is a lot smaller than those “HODLing.” That is the primary factor behind the greater adoption of cryptocurrencies, and the one we will look into first.

It’s clear that people are turning away from banks. They are aware of increasing inflation, negative interest rates, and stimulus packages. They are well aware that share prices can be a gross misrepresentation of a company’s worth. They know that the funds they have today may not take them and their loved ones into the future. 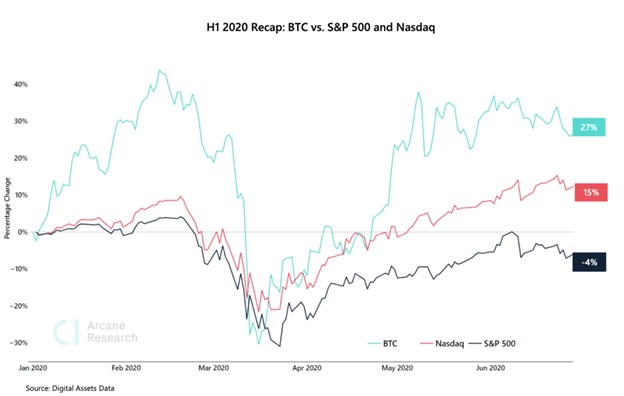 Seeing the growth of Bitcoin over the ten years, during which it has consistently beaten the S&P 500, has spurred them into putting some funds in the hope that it will continue. A smart move, despite what some cryptocurrency naysayers might say, so long as the capital is a reasonable amount.

There is nothing wrong with diversifying one’s portfolio, and cryptocurrencies provide assets that are almost entirely uncorrelated with other financial instruments. This is the primary factor attracting a greater range of investors.

Of course, that’s not to say there aren’t those who are looking to invest in cryptocurrencies just for the money. It’s true, there is a lot of money to be made, and the market can be scarily volatile at times — something brave (or reckless) investors hope to take advantage of.

There’s no wrong in that, but the greedier one gets, the more that is likely to be lost. All said and done, it is true that there is a particularly high return potential for cryptocurrencies, and that this is pulling investors in.

With the general trend being that of an upward one, derivatives traders are hopeful about the near to medium prospects of cryptocurrencies. Thus, they margin trade and hope that the contract meets their predictions.

Some exchanges take lengths to warn traders and provide tools to investors so that they rein in their excitement and trade sensibly. This is a necessary step as investors find investment easier as a result of our next factor, technology.

This factor is not discussed all that much, but is certainly a critical contributor to adoption.

Numerous mobile applications with seamless KYC procedures have arrived, making it possible for tech-savvy millennials to pull out their phones and start investing. More content creators are leveraging publishing platforms to spread the word about investment. Payment integrations and merchant partnerships have made exchanging profits for tangible benefits a real thing.

The effects of technology have a tendency to escalate quickly. Once individuals hear about an app that lets them invest comfortably, they tell their friends. Affiliate and referral programs, like those offered by Overbit, leverage this and provide attractive rewards.

Other factors are at play, of course, but these are some of the biggest drivers of mass adoption.

The COVID-19 pandemic only just brought out what people already knew, it highlighted problems that were already present. Countries have had to take a long look at their economic policies, while individuals have had to deal with the realisation that they need to fully own their finances.

Going forward, investments will only rise, especially in the cryptocurrency market. It is better to be safe and diversify your portfolio with an appropriate amount of capital in cryptocurrencies than to not do so at all.