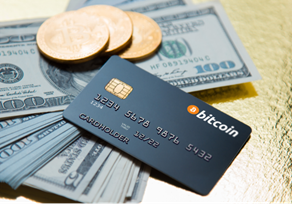 If you’ve invested in any cryptocoins before, then it’s likely you’ll understand that converting your cryptocurrency back into cash that you can spend isn’t the most straight-forward process. In previous years, there has been little opportunity to provide this to investors, but now it seems that some fintech companies have realised this challenge and sought to offer a solution. As such, the process of using your cryptocurrency as cash has become much simpler, and there are a few different ways in which you can do so, which are discussed below:

Some cryptocurrency exchanges, such as Coinbase, previously only allowed investors to convert their bitcoin back into either USD, GBP or EURO and send the cash back to their bank account via the SEPA protocol. However, this wasn’t so beneficial to investors outside of Europe, such as in the UK or USA, simply because the money would have to be transferred to a European bank account and would be paid out in EURO. As such, this either meant that investors would lose money as a consequence of the additional conversion pathways. Fortunately, exchanges like Coinbase have since moved to utilise the BACS payment protocol as well, which enables UK-based investors to easily withdraw cash back into their bank via their debit card. Unfortunately, for some nations such as Australia, this process is still unavailable so other processes may need to be explored at this time.

Virtual VISA cards are actually really popular among the crypto community, as they provide a pain-free and simple method of using your cryptocurrency as cash whether you want to withdraw or spend online. Additionally, there have been a number of fintech companies that have attempted to offer this service to investors, such as Wirex, Monaco, and TenX, which have seen much success over the past couple of years. However, many of these have since become unavailable in any other nation other than the USA, not to mention many of these companies have recently had to change their card issuer from WaveCrest Holdings Ltd. since they were instructed to close all cards of this ilk. However, recent news from TenX informed their customers that they will be shipping their new cards in December 2018, which seemingly means that investors will again be able to use virtual VISA to spend their cryptocurrency. The only caveat with these cards is that you will have to pay conversion / withdrawal fees, which could mount up if you’re likely to use it a lot.

While most of the current cryptocurrency ATMs available are specifically for buying and selling bitcoin, there are some other ATMs that will allow you to buy and sell other currencies too, such as Dash, Ethereum and Litecoin. In fact, there are over 4,000 cryptocurrency ATMs available across 74 countries, which offer investors a method of easily converting their digital assets into cash that they can then spend in retail stores. With more ATMs of this type scheduled to be launched, this is one of the simplest ways to convert cryptocurrency into cash and is available to all kinds of investors worldwide.

If you’re looking to spend your cryptocurrency as cash, then the most cost-effective method of doing so is to purchase goods from trusted merchants that will accept cryptocurrency as a valid method of payment. By doing so, you should be able to directly pay for the goods you want using your preferred cryptocurrency so that you won’t have to pay any conversion / withdrawal fees to an exchange. Not only that, but you’ll essentially maximise the value of your digital assets, as you won’t have to convert them into cash at a lower rate than the actual rate. After all, this is how cryptocurrencies were meant to be used, right?

All in all, while there are a number of methods to use your cryptocurrency as cash, at this moment in time it would seem that some methods of doing so are only available in certain countries. This is especially so when referring to Bank Transfer and Virtual VISA Cards. However, there are cryptocurrency ATMs and merchants across the world that will offer any investor the opportunity to use their digital assets as cash. Hopefully, in time cryptocurrencies will be truly mass-adopted and make it easier for consumers and merchants alike to truly reap the benefits of cryptocurrencies.