2018 has been a rough year for most cryptocurrencies, with many losing 60 percent or more of their ATH market cap. At the time of this writing, most coins still seem to be struggling to gain any traction. Currently, Bitcoin’s day chart sits under the 50 day moving average, and the MACD is testing crossover support. Ethereum is down over 40 percent since mid-September. Only a few altcoins have bucked the trend, such as Pundi X and Metaverse ETP.

Even fewer coins are up week-over-week, and only one cryptocurrency we surveyed is displaying a clear bullish trend signals: OptiToken.

OptiToken has found itself kind of cult following since its ICO, and it has quickly established itself at the forefront of the tokenomics project in trading chat groups and buzz circles on platforms like Telegram and WeChat. 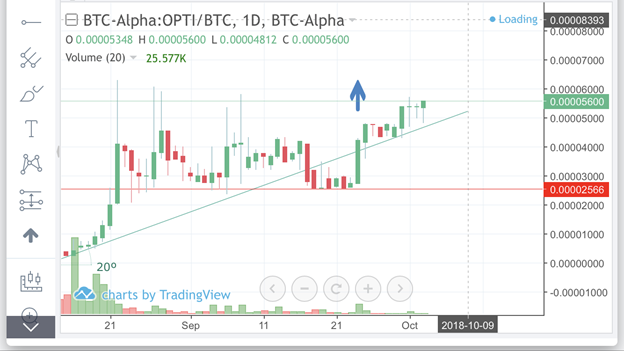 In fact, the spotlight seems to be shifting from altcoins that aim to replace bitcoin to more ‘non-payment centric’ coins. This is a reflection of the fact that tokens can fulfill a large variety of purposes, far beyond being a mere value transfer system. We have entered a new, multi-blockchain ecosystem filled with tokens filled with a huge array of use cases. The things people can do and the ways they can pay for things is exploding.

For cryptocurrencies in general, despite the fact that they continued to struggle, there are indications that things may get better. For example, Google search results for terms like “buying bitcoin” seemed to have found a bottom and look like they might be approaching a compound fulcrum when viewed as a line chart. 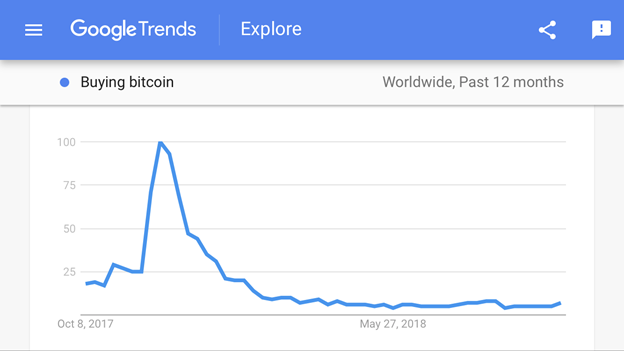 What this means is that the ‘weak hands,’ or speculators who often panic sell when an asset under performs their expectations, may now be mostly shaken out. The massive bull run at the end of 2017 saw a huge influx of new cryptocurrency adopters, and it may have taken this long to finally dump out of their positions.

This leaves those investors who have the most knowledge and most faith in the strength and potential of cryptocurrencies, and those investors are also looking to diversify their portfolios. These are the folks who have a vested interest in the success of the cryptocurrency ecosphere and are putting their effort and their money into helping it succeed.

If this project or others mentioned interest you than drop us a line. You can currently trade OptiToken at BTC-Alpha, and you can now officially buy it on FatBTC.com which additionally has a promotional contest giving buyers a chance to win 50,000 OPTIs in October and November. This means buyers have the potential of winning the equivalent of 20,000 dollars, nothing to sneeze at!

If you’re interested in Pundi X, you can find it on Binance.com among other exchanges.

Tokens like OptiToken and Pundi X, though gaining in popularity, are still relatively obscure. In many ways, they are a contrarian move – investing In them now is like investing in Ethereum before it saw its breakout rise. That being said, investing is always risky, and we advise all potential investors to do their own research.