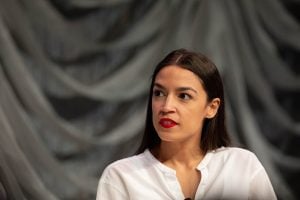 Rep. Marjorie Taylor Greene (R-Ga.) challenged Rep. Alexandria Ocasio-Cortez (D-N.Y.) to a pay-per-view boxing match Wednesday. While the discussion is still very much preliminary, it was proposed that the fight would be held at Caesar’s Palace in Las Vegas.

Considering the two women’s ravenous fan bases—and detractors—some experts think that if the fight is properly priced and marketed, it could pull in nine figures.

The fight was sparked after a series of tweets about the Green New Deal, an environmental policy seeking one hundred percent clean, renewable energy by 2030 that AOC has been pushing for some time now.

While celebrity boxing matches are somewhat becoming common place—this matchup would mark the first time in over 200 years that politicians have engaged in fisticuffs for the world to see.

Greene proposed a 70/30 split, with the winner taking the bulk of the purse. She seems confident that she would be able to handle Cortez, as she already requested the purse be converted to Bitcoin instead of USD, citing concerns over the legitimacy of the Federal Reserve.

“Now, I love my country,” Greene blurted out during the opening moments of her Instagram live, “BUT-there are forces at work right now… Forces that I’m not going to go into at the moment, but let me tell you… They are at work. I have read The Creature from Jekyll Island cover to cover nearly 15 times, so I know better than to take my winnings in the U.S. dollar. That only furthers the power that those con artists at the Federal Reserve has!”

People in the center right voiced their concerns that a highly visible member of the party was citing The Creature from Jekyll Island, considering it was written by G. Edward Griffin, who in addition to supporting Federal Reserve conspiracies and being both a 9/11 and HIV/AIDS truther (which I didn’t even know existed), believes cancer can be cured by consuming amygdalin.