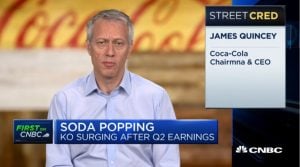 SARA EISEN: Tyler, thank you and James, thank you for joining us today. I invited you on because I was really eager to hear your responses, one of the biggest companies in Georgia, to the call from Ken and Ken, more than 70 Black executives to do more to directly oppose this Georgia legislation. How do you react?

JAMES QUINCEY: Yeah no I completely agree. Let me, let me get crystal clear and unequivocal. This legislation is unacceptable. It is a step backwards and it does not promote principles we have stood for in Georgia around broad access to voting, around voter convenience, about ensuring election integrity and this is, this is frankly just a step backwards. We’ve spent many decades promoting within Georgia a better society and a better environment for business and this is a step backwards and we’re very clear on that and our position remains the same. This legislation is wrong and needs to be remedied and we will continue to advocate for it both in private and now even more clearly in public.

EISEN: So you’re clear now James but there are questions as to why you were not this clear after the law passed, before the law passed. I know you said you were disappointed but why don’t you just come out publicly and oppose it before?

QUINCEY: We’ve always opposed this legislation. We have a long track record of working in Georgia with alliances on our own account, with legislators, with stakeholders to improve legislation and we were doing so again this time. But the result of this legislation in an area that’s particularly sensitive and important for Georgia has not resulted in something that is acceptable, we believe, for the citizens of Georgia. So we’re coming out even more clearly saying that this is wrong and it needs to change. The reality is many things are improved and done and achieved in private without having to take it public, in this case it does not work, clearly, we’re being more forceful in our public position, even more than we were earlier this week and will continue to advocate for change in Georgia.

EISEN: Does that extend to how you’ll think about political donations? Your company has supported thousands of dollars given to some of the bill sponsors and other legislators in Georgia. Are you rethinking that, how do you plan to put words, to put action if at all into those words?

QUINCEY: We have already earlier this year before this legislation all of our political givings to the company’s PAC, and we will continue to think about how we use our dollars to promote the things we believe in, to support the company and its purpose and its values and voter access will be one of those things as we did put money behind the hate crimes bill that also passed in Georgia.

EISEN: You say you’ve decided now James to take a more public and more forceful stance against this legislation. Is it driven by the boycotts that you’ve been facing from a number of civil rights activists? It’s all over social media now because you did not take a firm enough stand.

QUINCEY: The change we’re making is because the legislation has passed. We were working, along with many others, to get legislation that we thought would be a step forward and it is not. And now that it’s passed, we’re coming out more publicly. Of course, people are entitled to use their wallets to express their voice on, on many different aspects that they believe are important, but what we’re focused on now is that the fact that the legislation has passed, it was rushed. That was not good process. It was not profound and deep enough to really think it all through and it’s an unacceptable piece of legislation and so now we are focused on advocating and trying to get it changed.

EISEN: What specifically in the legislation are you looking to have changed?

QUINCEY: I think one has to go deep into the, there’s a lot of line items, a lot of pieces and then a whole series of items on access to drop off ballot boxes, on the way that the, the authorization of officials is set up to even, you know, people call out the, the giving out of food or drink. We’re certainly not trying to promote our own drinks on, on election day, but there’s a whole set of measures that need to be looked at individually in the context of how Georgia actually works and how Georgia is actually set up, and then collectively, and it needs to sum up to a step forward.

EISEN: Think one of the other problems and Ken Frazier noted this, this morning that the concern for some that oppose it is that we’re seeing a lot more of this, more than 200 measures and 43 state legislatures have been announced and looked at since President Trump made those false voter claims about fraud in the 2020 election. What’s your message to other companies right now in other states that may be weighing these kinds of bills?

QUINCEY: Well I think that it’s certainly the companies will have to have to look at what’s their, what’s their purpose, what values do they believe in and, you know, companies cannot participate in every political issue. Certainly, voter access seems to me, as it did to the two camps, a fundamental cornerstone of democracy and a much, should be a less political issue in ensuring voter access I think is very important. Clearly, our focus will be on Georgia and then, of course, engaging in what will end up being also a federal level.

EISEN: A lot of people are also drawing comparisons and contrast to what happened a few years ago in your state where there was legislation on the table, the bathroom bills. You remember you and so many other companies, Fortune 500 companies, took a strong moral stand opposing these bills, made threats that you’re going to pull business and jobs and, and Hollywood so they weren’t going to film in Georgia and, and ultimately it worked. What do you tell people who wonder why we’re not seeing the same kind of response from you and others in corporate America now that we saw a few years ago?

QUINCEY: I can’t speak for everyone, all the other corporates and revolvers, certainly, in our case, whether it be the bathroom legislation, the hate crimes legislation or this, we have been always having a clear voice with legislators on matters and bills that we think are important to Georgia, to Atlanta, and that goes to the heart of the values of believing in diversity and inclusion that are underpinning of our company and the core brand and we make our voice heard.

EISEN: Just a broader point about all of this, James, in 2021, as a CEO, as a company, you have to, you have to take stands on issues like this, on politics, on social issues, on social justice and you have at Coca-Cola. How tricky is that when you’re a consumer company that tries not to alienate some of your customers and consumers but also wants to do the right thing?

QUINCEY: Yeah, this goes back to the central idea, you have to be clear on what the company stands for, what is its purpose, what, what are the core values and what is, what is central to you. You certainly cannot get involved in every issue in every state at the federal level. But the ones that are most pertinent to the things that a company believes in and in the case of the Coca-Cola company, we are one of the world’s most globally diverse companies, we’re one of the most diverse companies in America, whether it’s the people we serve, the consumers that enjoy our products, the customers, through our board, our leadership and into our employee base. We’re a very diverse company and we’re going to continue after many decades of working on diversity inclusion, not always perfectly, but we are going to continue to stand for those principles in Georgia, in, in the US and we’re going to continue to focus on those issues because they are most core to the Coca-Cola company.

EISEN: James Quincey, thank you very much for clarifying your position and for coming out today on CNBC and talking to the audience about it. We appreciate it. CEO and Chairman of Coca-Cola.