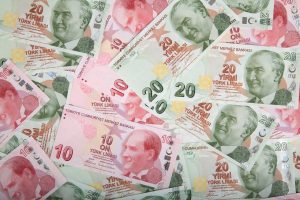 Commenting on the plunge in the Turkish Lira and today’s markets strategist Louis Navellier wrote in a note to investors:

The FOMC expects inflation to ease to 2% in 2022 and 2.1% in 2023, and their actions indicate they are sticking to their belief that recent inflationary forces are “transitory.” Still, financial markets like the fact the FOMC admitted that higher inflation exists while holding its 0% interest rate policy through 2023 with quantitative easing.

The bad news is that the 10-year Treasury bond yield continued to rise. That spooked many investors, since some bond vigilantes think the Fed does not have enough money to continue quantitative easing indefinitely, in their quest to fully control the Treasury yield curve.

Turkey’s President Tayyip Erdogan fired the head of his country’s central bank, Naci Abgal, two days after implementing a sharp 8.75% interest rate increase to 19% to fight inflation.  This is the third time since mid-2019 that President Erdogan has fired a central banker.  The new head of Turkey’s central bank is Sahap Kavcioglu, who is a former member of Parliament and was a big critic of Abgal’s hawkish monetary policy.  Not surprisingly, the Turkish lira plunged approximately 15% in the wake of President Erdogan firing another central banker.

Covid-19 cases continue to resurge in Continental Europe, so their double dip recession persists as they continue to argue about vaccinations and why they are lagging behind the U.S. and Britain in vaccination rates.  Interestingly, despite about 2.5 million vaccinations per day now being administered in the U.S., John Hopkins reported that Covid-19 cases have risen 5% in 27 states.  The goal of many things getting back to normal by July 4th is an admirable target, so let’s all hope normalcy arrives sooner than later.

The Aftermath Of A Fire In Japan

Despite these developments around the world, possibly the biggest economic news this week was the aftermath of a fire in Japan.  Specifically, the automotive semi-conductor shortage became much more acute after a fire at one of the world’s leading chip manufacturers.  A factory owned by Renesas Electronics said that it will be at least a month to restart operations at its semi-conductor plant.  As a result, Japanese auto manufacturers like Honda, Nissan, and Toyota, all sold off in the wake of this fire, since they will now likely have to further curtail their production.  This is the second recent Japan disaster to impact semi-conductor manufacturing after an earthquake in February halted a factory in Hitachinaka for a few days and reduce the supply of chips.

In the U.S., existing home sales have finally peaked.  The National Association of Realtors announced that existing home sales in February declined 6.6% compared to January and have declined 9.1% compared to the same month a year ago.  There were only 1.03 million homes for sale in February, which is the same as January, and the lowest level since 1982.  In the past year, the supply of new homes has fallen 29.5%, which is a record annual decline.  At the current annual sales pace, there is only an ultra tight 2-month inventory for sale.

The post Turkish Lira Plunges As The Central Bank’s Head Gets Fired appeared first on ValueWalk.