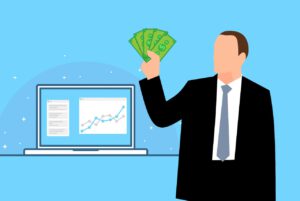 Whitney Tilson’s email to investors discussing GameStink ‘only’ down 26% in the past week; the SPAC boom; short sellers boost bets against SPACs; opportunities in the SPAC sector.

GameStink ‘Only’ Down 26% In The Past Week

Well, my first prediction was close: As of earlier this morning, the stock is down 26%! I stand by my other two forecasts…

SPACs have come to dominate the initial public offering (“IPO”) market over the past eight months (in fact, in the first six weeks of this year, SPACs have raised $38.3 billion… nearly double the $19.8 billion from traditional IPOs)…

The sector is definitely getting frothy… and there’s no way that these 300-plus SPACs, as a group, will do well.

This article in the Financial Times has the latest data through March 16: SPAC boom eclipses 2020 fundraising record in single quarter. Excerpt:

Blank-cheque companies have already surpassed last year’s fundraising record in the first quarter of 2021, reflecting the insatiable appetite for special purpose acquisition companies among both institutional and retail investors.

SPACs have raised $79.4bn globally since the start of the year, eclipsing the $79.3bn that flooded into vehicles in 2020, according to data provider Refinitiv, as of Tuesday night. So far in 2021, 264 new SPACs have been launched, overtaking last year’s record 256. 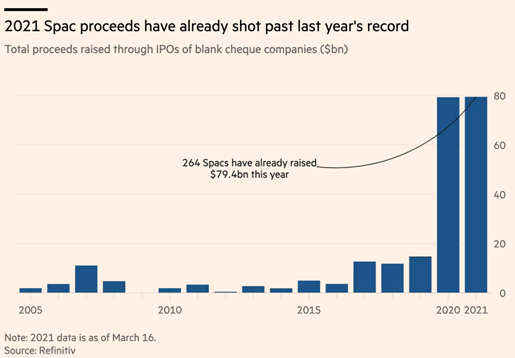 As a result of so many IPOs, too much money is likely chasing too few deals, as this article in today’s New York Times highlights: ‘The Market Seems Crazy’: Start-Ups Wrestle With Flood of Offers. Excerpt:

Dozens of SPACs began e-mailing Mr. Schaffer through their advisers, investors, bankers and other middlemen. Eventually, the interest became so overwhelming that, he said, he stopped responding to new inquiries. Even his accountant had a SPAC hookup.

“The market seems crazy,” Mr. Schaffer said. “They want to go so fast.”

Many start-ups are being similarly deluged as SPACs have kicked off an extraordinary dealmaking frenzy. In recent months, these investment vehicles – also known as “blank-check companies” – have pulled out all sorts of tactics to make deals with target companies. Their strategies include offering stratospheric values, dangling incentive bonuses and recruiting celebrities like Sammy Hagar and Shaquille O’Neal to their advisory boards to lend some star power.

And if all else fails? They badger the start-ups.

3) The sector has taken a bit of a breather in recent weeks, however, with the SPAC and New Issue Fund (SPCX) declining roughly 10% from its recent peak.

Short sellers are coming for SPACs.

Investors who bet against stocks are targeting special-purpose acquisition companies, one of the hottest growth areas on Wall Street. The dollar value of bearish bets against shares of SPACs has more than tripled to about $2.7 billion from $724 million at the start of the year, according to data from S3 Partners.

Some of the stocks under attack belong to large SPACs that surged in recent months, in part because they were backed by high-profile financiers. A blank-check company created by venture capitalist Chamath Palihapitiya that plans to merge with lending startup Social Finance is a popular target, with 19% of its shares outstanding sold short, according to data from S&P Global Market Intelligence. The short interest in Churchill Capital IV (CCIV), a SPAC created by former investment banker Michael Klein that is merging with electric-vehicle startup Lucid, more than doubled in March to about 5%.

Others are wagering against companies after they combine with SPACs.

There’s undoubtedly a lot of foolishness in the sector. Take a look at the absurd revenue projections of various electric-vehicle startups going public via SPACs, which the Wall Street Journal summarizes in this article: Electric-Vehicle Startups Promise Record-Setting Revenue Growth. Excerpt:

It took Google eight years to reach $10 billion in sales, the fastest ever for a U.S. startup. In the current SPAC frenzy, a spate of electric-vehicle companies planning listings are vowing to beat its record – in some cases by several years.

Among the most ambitious are luxury-car maker Faraday Future, U.K.-based electric-van and bus maker Arrival, and auto maker Fisker (FSR). Each has disclosed plans to surpass the $10 billion revenue mark within three years of launching sales and production…

The forecasts for record-setting growth illustrate the extent of the fervor for electric-vehicle startups, particularly for those going public by merging with SPACs, which are shell firms that list on a stock exchange with the sole purpose of acquiring a private company to take it public. More than 10 electric-vehicle or battery companies that struck deals with SPACs have been valued in the billions of dollars before producing any revenue, as amateur traders and many traditional investors have flocked to the buzzy sector.

Opportunities In The SPAC Sector

4) While this is a risky sector to invest in, opportunities are presenting themselves amidst the pullback.

In particular, a number of SPACs that have announced deals are trading near $10 per share. Since investors can take $10 in cash any time before the deal closes, this presents an attractive risk/reward setup. As we explained in the latest issue of Empire Investment Report:

That means one of two things will happen…

Once the deal is complete, it’s no longer a SPAC… It’s a company with its own future. Some will succeed and some will fail. But we know that at least if a deal has been approved, the shareholders believe that even with the future uncertain, the stock is worth more than $10 in cash.

Another way to take advantage of this opportunity is to buy the warrants of certain SPACs whose shares are trading around $10… and my colleague Enrique Abeyta recently identified six of these in the latest issue of his Empire SPAC Investor newsletter.

In summary, if you’re going to invest in this sector, you need a savvy guide who knows it backward and forward… and there’s nobody better than Enrique. Since launching Empire SPAC Investor in October, he has recommended seven SPACs (excluding his most recent issue) – including one that has already doubled!

Click here to sign up for Empire SPAC Investor. If you’re not satisfied for any reason, just call our customer service team within 30 days and we’ll give you a full credit, which you can apply to any other Empire Financial Research product.