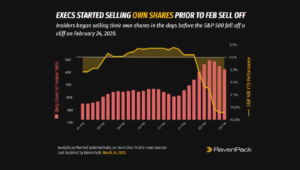 Quantamental investing is an increasingly popular hybrid approach that combines scientific rigor with discretionary verve. How did the approach prove useful in 2020 and how might it be applied to market themes in 2021?

It used to be the case that discretionary traders and quants came from different planets and didn’t get along very well.

Quants worshipped at the altar of science trusting only what could be verified; Discretionaries didn’t ignore science but saw investing more as a blend of talent, experience, knowledge, and nerve.

Previously the two sat at opposite ends of a typical investment office sharing little, but over the last decade asset managers have been trying to arrange a marriage between the awkward couple.

Pimco, Blackrock and Man Group are just a few of the big names in finance that routinely integrate both approaches in their investment practices.

Partnering discretionary with quant makes a lot of sense as the two could be seen as highly complementary – quants find high-quality data-driven signals which discretionaries can then integrate into their decision-making.

Think Captain Kirk and Spock. Could Kirk have been half as effective without Spock’s objectivity? Could Spock have captained the Starship Enterprise on his own? In one memorable episode, he tried but found despite his logic and vast intelligence, he lacked what it took to make lightning-quick difficult decisions.

Sentiment Analysis: Not the Final but the Next Frontier

Quants like to build their models using hard, quantifiable data and one source they are increasingly turning to is alternative data.

News sentiment data is one of the fastest-growing subsets of alternative data. It is generated by systems that scan the news and generate actionable statistics based on changing news flow and sentiment around different entities and events.

At first glance, news sentiment analysis might not seem the ideal candidate for building a quantamental model. The news tends to be thought of as having a short-term impact on markets whilst most fundamental investors have longer-term investment horizons.

In reality, the opposite is true. There is now an increasing body of evidence to suggest that there is a lot of scope for developing quantamental strategies driven by news sentiment analysis that also cater to longer-term investors.

2020 and the Coronavirus Pandemic

2020 provides some interesting case studies where news sentiment analysis could have been used in quantamental models.

During the Coronavirus pandemic one sector which made gains was BioPharma due to the increased demand for medical equipment and apparel, as well as expectations of massive future demand for a vaccine.

Research carried out by RavenPack uncovered a close connection between the number of times a BioPharma company was co-mentioned in the news with COVID-19 and changes to its share price, with stocks that enjoyed a higher co-mention volume tending to go on to be top performers in the sector.

News sentiment might have provided investors with the basis for a quantamental strategy for timing 2020’s major market turns.

News about insiders – that is executives who own shares in the company they work for – selling their shares, rose sharply prior to the late February sell-off potentially providing investors with a warning signal. 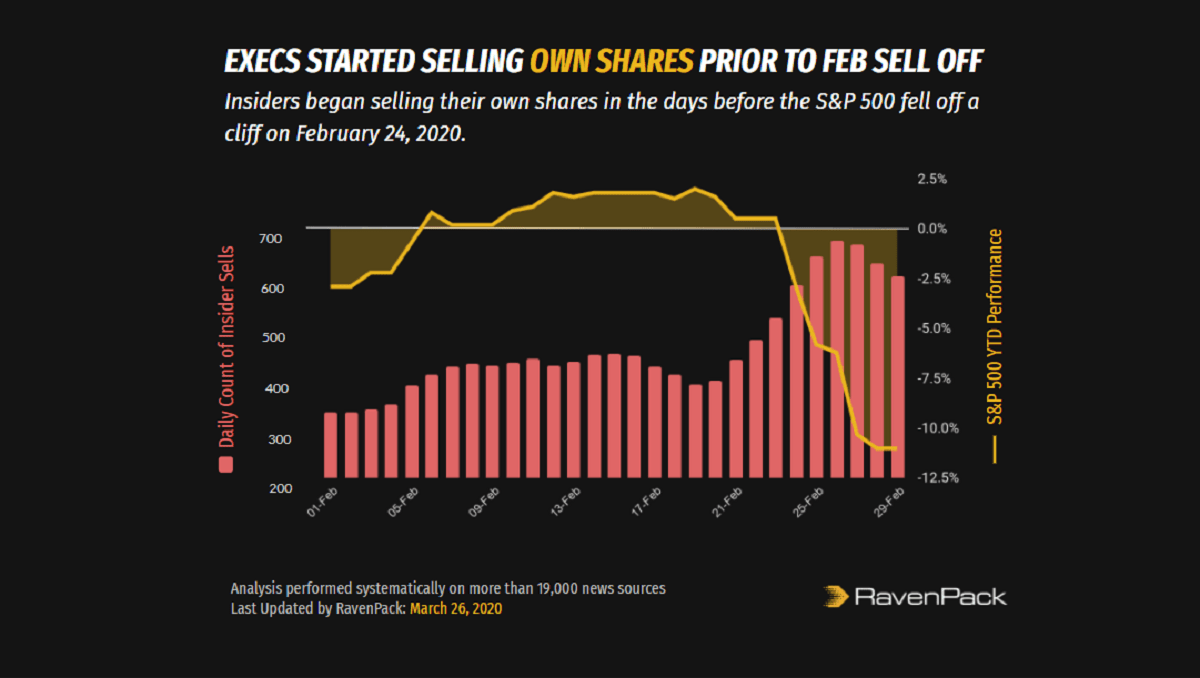 Likewise, news about insiders buying shares in the companies they worked for peaked prior to the market bottom in late March offering the reverse signal. 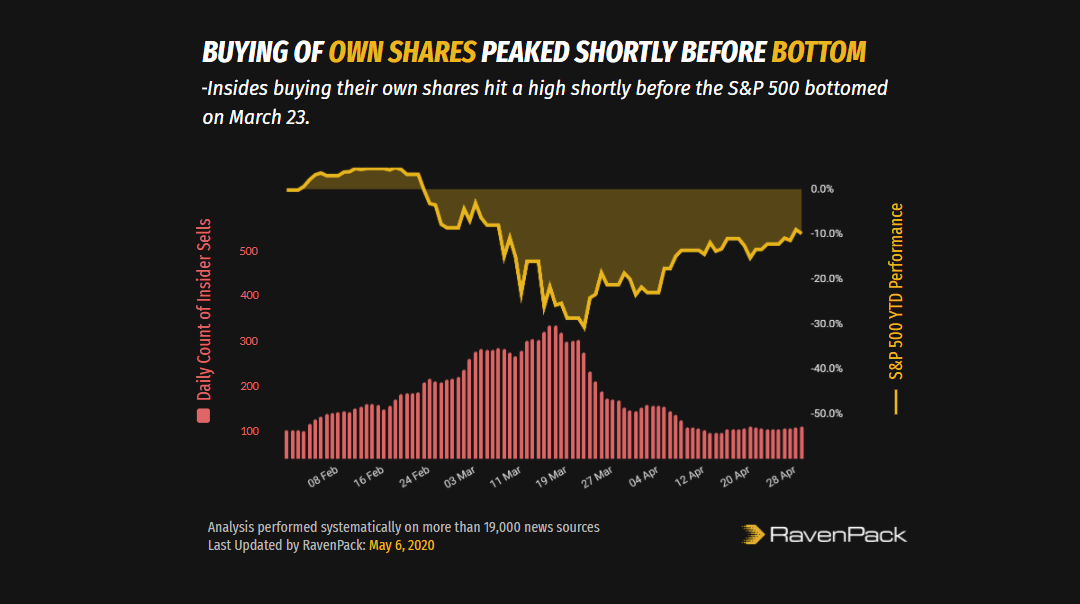 If formalized, these signals could have been incorporated into a quantamental model for forecasting major market turning points.

Discretionary Investors often adjust their positions in the light of political changes such as the one that took place during the U.S. Presidential election. 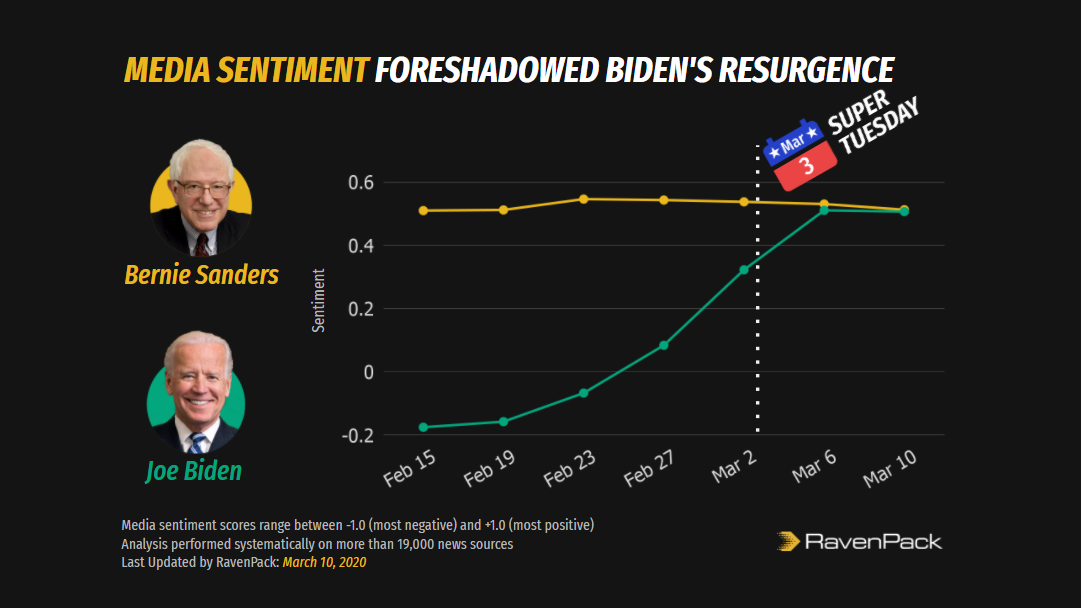 Later during the election itself, RavenPack’s election forecasting model correctly predicted the eventual winner, bringing its tally of successes to 5 out of the last 6 U.S elections. 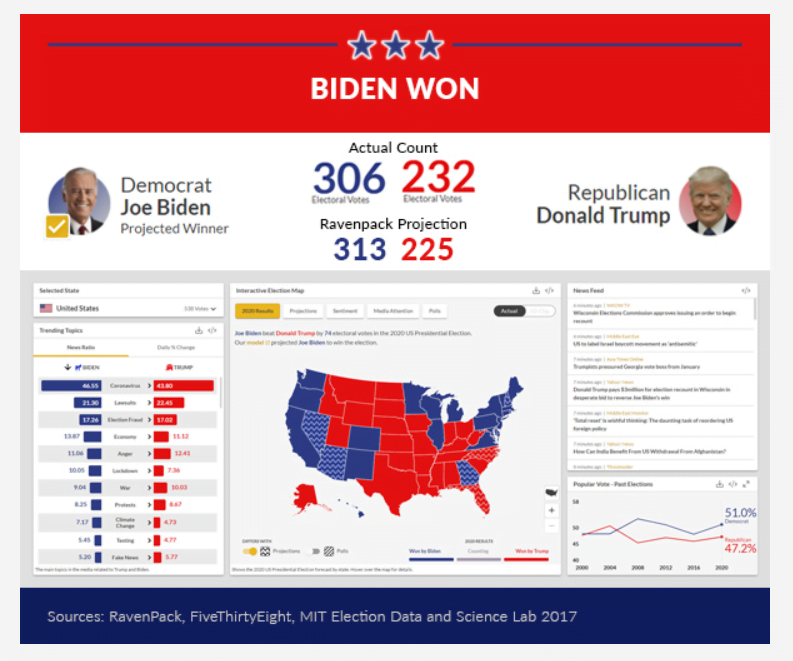 This is not the only time news sentiment was successfully harnessed to provide insights into an election outcome.

On the eve of the 2016 Brexit referendum in the UK when polls showed ‘Remain’ marginally in the lead, a sentiment model developed by the RavenPack data science team using baskets of leading proponents for the two sides showed the ‘Leave’ basket nudging into the lead, based on news sentiment, and in the end this reflected the Leave campaign’s narrow win on the day.

Potential Applications to Major Trends in 2021

Looking ahead it might be interesting to speculate as to how investors might use news sentiment data in quantamental approaches in 2021.

One of the major themes likely to dominate in the year ahead is the extent to which central banks continue to provide stimulus to the wider economy. Central banks make changes to base lending rate changes which impact on wider fixed income instruments and the cost of credit.

News sentiment is well suited to predicting the outcomes of central bank meetings as shown by a study conducted by researchers at the Bank of International Settlements who developed a model quantifying news sentiment prior to meetings of the Bank of Indonesia to predict whether it would make interest rate changes or not. The model was found to have a greater accuracy than Bloomberg’s survey of economic experts.

In another study using RavenPack news sentiment data, academics Michael Brandt and Lin Gao of Duke University and the University of Luxembourg respectively, found that the data had efficacy in forewarning of interest rate changes in the U.S. during periods of both optimism and pessimism. This was in contrast to the majority of key economic releases where the data tended to lose its predictive power during periods of broad-based market pessimism.

“Similarly, the news index seems to lead the actual increase of interest rates (FOMC announcement). The news index goes down around 2001 and rises around 2004, earlier than the actual interest rate release. This is quite interesting, as we know that information on change of interest rates is kept confidential before the FOMC meetings (see, for example, Bernile et al. (2016)).” Said Brandt and Gao in “Macro Fundamental Events or Geopolitical Events: A Textual Analysis for News Events for Crude Oil”.

The Search For Value

Another investment theme likely to continue in 2021 is how investors are rotating into value stocks, and here RavenPack data has found uses as a trigger in a quantamental model for identifying which value stocks are most likely to rise from a basket of hopeful turnaround candidates. In one study those that showed 30-day average news sentiment that was in the upper 4 deciles went on to make average 10% gains over the following year.

The U.S. Dollar to Decline

Finally, one prevalent theme experts are suggesting will dominate the outlook in 2021 is that of the U.S. Dollar will weaken.

The view is supported by valuations that indicate that when set against the Dollar most major currencies register as undervalued with the implication that they are likely to recover.

News sentiment data can help FX traders by providing orthogonal value to traditional factors such as value, carry and momentum, according to a recent white paper written by our data science team that showed adding news sentiment data gave a threefold return boost to an orthodox factor trading regime.

That news sentiment can be used in combination with other variables is also borne out by the experience of several of our clients who have built FX quantamental forecasting models with medium to long-term horizons.

Overall it can be seen that far from being the preserve of quants in high-frequency trading shops, sentiment data can provide a more rigorous scientific underpinning to discretionary techniques and longer-term investment models, suggesting that combining the two approaches might not lead to such an unhappy marriage after all!

The post Bridging The Quantamental Divide: Applications In 2020 And 2021 appeared first on ValueWalk.