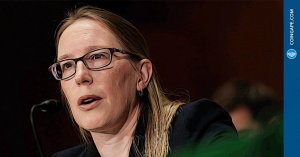 Hester Pierce, the SEC commissioner also popularly known as “crypto mom” has called for an urgent crypto regulatory clearance from the administration as institutions such as Tesla Inc added Bitcoin to their treasury with a $1.5 billion purchase while one of the oldest custody banks BNY Melon has decided to offer crypto custody services amid growing demand from the clients over the past week. Pierce made these comments in an interview with Reuters and said,

“It’s not only that there have been calls for clarity for some time and that a new administration brings the chance to take a fresh look, but it also is a moment where it seems others in the marketplace are also taking a fresh look, ”

“That adds to the urgency of us taking some sort of action in this area to provide more clarity,”

Pierce, a Republican senator is a known crypto advocate for better regulations to help the US lead the fintech race. Last week it was not just Tesla’s massive bitcoin purchase that made headlines, apart from the electric car makers a slew of publically traded companies such as Twitter, and Uber revealed they are planning to use Bitcoin as a form of payment while the likes of Goldman Sachs and JP Morgan revealed they are considering to offer Bitcoin trading based on client’s demand.

MasterCard the payment processing giant also announced that it would start offering direct crypto purchase and sale services for the cardholders by the end of this year.

One week in Bitcoin feels like one year elsewhere.

The growing institutional demand added with booming bitcoin prices has forced many governments around the globe to take note of the top cryptocurrency regulatory stance.  The comment of the SEC commissioner is a clear hint that the lawmakers have took note of the recent institutional buying frenzy.

Apart from several multi-billion publically traded companies buying bitcoin, Canada launched North America’s first Bitcoin ETF as SEC is yet to approve any of the applications filed by multiple companies to launch a Bitcoin backed ETF. However, the slew of developments over the past week could force US regulatory bodies to change their stance towards the crypto market and regulate it in a way to compete with other North American and European counterparts.