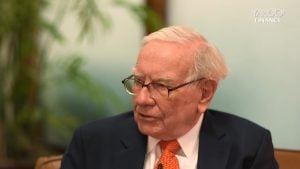 There seem to be to schools of thought when it comes to investing. One is the so-called value investors community, where folks look at low P/E ratios, high dividend yields, low price to book or price to sales. In other words, value investors try to acquire assets at a portion of their worth.

On the other hand, there are some growth investors, who believe that companies with growing sales, and growing earnings are more valuable. They do sophisticated discounted cashflow analyses to project future growth, and discount at a certain rate to come up with fair value.

Buffett stated the following in his 1992 letter to shareholders:

“Most analysts feel they must choose between two approaches customarily thought to be in opposition: “value” and “growth.” Indeed, many investment professionals see any mixing of the two terms as a form of intellectual cross-dressing.

We view that as fuzzy thinking (in which, it must be confessed, I myself engaged some years ago). In our opinion, the two approaches are joined at the hip: Growth is always a component in the calculation of value, constituting a variable whose importance can range from negligible to enormous and whose impact can be negative as well as positive.”

Looking At Value And Growth As One Thing

As a Dividend Growth Investor, I have followed an approach that looked at value and growth as one thing. I looked at things like P/E ratios, but also looked at growth, along with sustainability and defensibility of the earnings stream throughout past economic cycles. Please check my article on how to value dividend stocks.

I recently found the following video, which explains this neatly. (Youtube)

I have also included the transcript from the 2001 Berkshire Hathaway Meering your reference: (Source: CNBC)

13. “There is no such thing as growth stocks or value stocks”

You’ve often stated that value and growth are opposite sides of the same coin.

Would you care to elaborate on that? And do you prefer a growth company that is selling cheap or a value company with moderate or better growth prospects?

WARREN BUFFETT: Well, actually I think you’re — you may be misquoting me. But I really said that growth and value, they’re indistinguishable. They’re part of the same equation. Or really, growth is part of the value equation.

So, our position is that there is no such thing as growth stocks or value stocks, the way Wall Street generally portrays them as being contrasting asset classes.

Buying $200 Million Worth Of Simulators

As I mentioned at FlightSafety, we’re going to buy $200 million worth of simulators this year. Our depreciation will probably be in the area of $70 million or thereabouts. So we’re putting $130 million above depreciation into that business.

Now that can be good or bad. I mean, it’s growth. There’s no question about it. We’ll have a lot more simulators at the end of the year. But whether that’s good or bad depends on what we earn on that incremental $130 million over time.

So if you tell me that you own a business that’s going to grow to the sky, and isn’t that wonderful, I don’t know whether it’s wonderful or not until I know what the economics are of that growth. How much you have to put in today, and how much you will reap from putting that in today, later on.

It’s been great for the American public. But growth has been a curse in the airline business because more and more capital has been put into the business at inadequate returns.

Now, growth is wonderful at See’s Candy, because it requires relatively little incremental investment to sell more pounds of candy.

So, its — growth, and I’ve discussed this in some of the annual reports — growth is part of the equation, but anybody that tells you, “You ought to have your money in growth stocks or value stocks,” really does not understand investing. Other than that, they’re terrific people. (Laughter)

Not Having To Be Smart Again

CHARLIE MUNGER: Well, I think it’s fair to say that Berkshire, with a very limited headquarters staff — and that staff pretty old — (laughter) — we are especially partial to laying out large sums of money under circumstances where we won’t have to be smart again.

In other words, if we buy good businesses run by good people at reasonable prices, there’s a good chance that you people will prosper us for many decades without more intelligence at headquarters. And you can say, in a sense, that’s growth stock investing.

WARREN BUFFETT: Yeah, if you had asked Wall Street to classify Berkshire since 1965, year-by-year, is this a growth business or a value business — a growth stock or value stock — you know, who knows what they would have said.

And I just cringe when I hear people talk about, “Now it’s time to move from growth stocks to value stocks,” or something like that, because it just doesn’t make any sense.

Dividend Growth Investor here. That is a very insightful discussion from Warren Buffett and Charlie Munger.

The Returns And Sources Of Returns

When evaluating investments, it is very helpful to think about the returns and sources of returns. I follow the idea that returns are a function of three factors:

I will illustrate this principle by looking at Realty Income (O). Check my last analysis of Realty Income for more information behind the company.

If FFO/share was flat however, dividends would have been flat as well. That would have likely depressed the Price/FFO ratio. Investors would have also most likely demanded a higher dividend yield.

Of course, hindsight is always 20/20. But on the other hand, we only have past data when we are making decisions, which is why intelligent investors should look for ways to determine the likelihood that future results.

Realty Income is a quality company with a management team that has a proven track record of growing Funds from Operations, managing the portfolio etc.

I see Realty Income as the gold standard in triple net leases. The future is always uncertain, but I think the management has kept up with being transparent, and I have watched their collectibility slowly creep up. If you look at Price/FFO ranges in the past decade, the current high is within that range. The nice thing of course is that FFO/share grows over time, and the dividend is in my opinion secured by the cash flows from the leases. Value and growth are attached at the hip.

The post Value And Growth Are Attached At The Hip appeared first on ValueWalk.