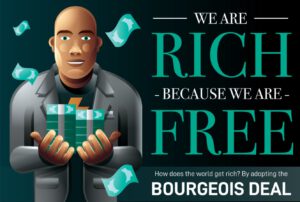 What makes entrepreneurship possible? Entire libraries are dedicated to answering this question for individuals, but the societal level is categorized as history more often than business. People who build a successful company take their current environment for granted. It’s natural for business owners of America to expect secure property rights, open and competitive markets, and an honest legal system. In societies like America’s, anyone who wishes to innovate may do so.

How To Become An Entrepreneur

But where did these vital pillars of our society come from? As this infographic on how to become an entrepreneur from EdSmart suggests, the transition occurred when Western society rejected the aristocratic deal (“do what I say and I’ll let you work”) in favor of the bourgeois deal (“leave me alone and I’ll make you rich”). The revolutions, revolts, and reformations that occurred in the early modern era paved the way for a reevaluation of Western values. Traditional bourgeois folk such as shopkeepers, merchants, and innovators went from being suspect to the drivers of progress. Working in one’s own interest went from being a sign of poor character to an expectation of anyone trying to make it commercially.

The result? A sharp increase in global wealth and standard of living. Extreme poverty is at the lowest rate ever recorded, dropping from half the globe in 1966 to 9% in 2017. In the US, the country-specific poverty line went from including 22.4% of the population in 1959 to 10.5% in 2019. Reductions in poverty mean an increase in living standard. 90% of modern American households have air conditioning, and the average household owns nearly 2 cars. Things that would have been signs of luxury decades ago are commonplace today thanks to entrepreneurs’ work.

Free markets are necessary for prosperity, but they aren’t enough alone. Societies like America also require liberty, dignity, and equality for all; virtues of faith, love, and courage; and values of justice, temperance, and prudence. Recognizing individuals’ right to self-author requires society to extend liberty and dignity to everyone. Prosperity can’t reach everyone unless everyone is empowered to innovate.

Today, anyone can be a merchant. Women and people of color can find liberation in ways once restricted to their white male peers. They are able to embrace the maxim of an entrepreneurial culture: “we are rich because we are free.” Their progress and success in the field of innovation will only lead to greater futures.

The post How Western Society Created The Entrepreneur appeared first on ValueWalk.