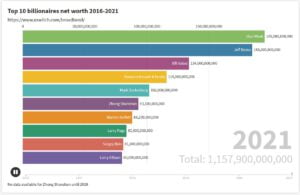 Although Elon Musk is now the world’s richest person, for years he was way off earning more dough than Amazon founder, Jeff Bezos, and a number of his affluent peers. So just how quickly did Musk surpassed Bezos’s wealthiness?

Research by Uswitch reveals just how quickly Musk surpassed Bezos’s wealthiness, as his net worth has now crossed $185bn (£136bn). You can see exactly when Musk surpassed the top spot in a graphic created by Uswitch, below.

Mr Musk’s electric car company Tesla has hit a market value of $700bn (£516bn) for the first time, and you can see just how popular Tesla cars are around the world here on this map, showing the most sold electric cars per country.

Thank you for indulging us over the last 20 years by using a small ‘u’ and a big ‘S’ when writing about our brand in your articles.

We are delighted to let you know that you are now off the hook – it’s big U’s all the way (and small s’s) as we undertake our biggest ever rebrand – so let your autocorrect go wild!

Uswitch is the UK’s top comparison website for home services switching. Launched in September 2000, we help consumers save money on their gas, electricity, broadband, mobile, TV, and financial services products and get more of what matters to them. Last year we saved consumers over £373 million on their energy bills alone.

Uswitch is part of RVU, a new business that also owns Money.co.uk and Bankrate.

The post How Quickly Musk Took Over Bezos As Richest Person appeared first on ValueWalk.