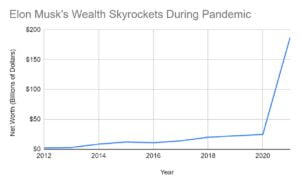 The Growth In Elon Musk’s Wealth

WASHINGTON, D.C. – Elon Musk, the billionaire CEO of Tesla and SpaceX, is now the richest person in the world, surpassing former titleholder and Amazon chief Jeff Bezos with a net worth of $187.7 billion, according to Forbes’s real-time billionaire net-worth estimates on Jan. 8, 2021 at 1pm. Since March, Musk’s wealth has grown almost seven-fold, up a staggering $163.1 billion.

The fortunes of America’s billionaires as a whole have soared during the pandemic even as working Americans have struggled to stay employed, healthy, housed, and fed. However, Musk’s wealth growth has been especially stunning: he was worth “only” $24.6 billion on March 18, 2020, the rough start to the pandemic. Musk’s wealth increase of $163 billion since March is nearly equal to the $166 billion cost of the $600 stimulus checks in the latest COVID-aid package, which will be paid to upwards of 150 million Americans.

Musk’s immense growth in wealth is not simply a retrieval of money lost in the market plunge of February 2020 that anticipated the pandemic and resulting economic lockdown. He was worth about the same in March 2019 ($22.3 billion) as in March 2020. Musk’s burst of billions over the past 10 months has been pure gain.

Bezos Is Hardly A Figure Of Pity

Despite losing the top spot on the wealth list, Bezos is hardly a figure of pity: his wealth has skyrocketed $71 billion to $184 billion since March. And the triad of Earth’s richest people— Musk, Bezos, and Microsoft founder Bill Gates—are collectively worth almost half of a trillion dollars ($493.4 billion). The net worth of these three mega-billionaires is about as much as the $500 billion in total state and local budget shortfalls projected over the next two years due to the pandemic and resulting recession.

“Musk’s wealth growth during the pandemic is mind-boggling. While millions of Americans have lost work and hundreds of thousands have lost their lives, billionaires like Musk are having the greatest financial year of their lives,” said Frank Clemente, executive director of Americans for Tax Fairness. “With the new administration and Congress, we have the chance to reform the tax code so that the rich and corporations finally pay their fair share. A special tax on billionaires like Musk would be a good place to start.”

The 651 U.S. billionaires have gained over $1 trillion in wealth since March 2020 and are worth a jaw-dropping $4 trillion. Billionaires’ wealth growth during the pandemic is more than the $900 billion relief package that was recently signed into law and would be enough to send $3,000 stimulus checks to every single one of the roughly 330 million Americans.

As Musk’s wealth multiplied nearly seven times over 21 million Americans contracted COVID-19 and 365,000 died from it. Additionally, 98,000 businesses have permanently closed as a result of the economic crisis and 12 million Americans have lost employer-sponsored health insurance during the pandemic. 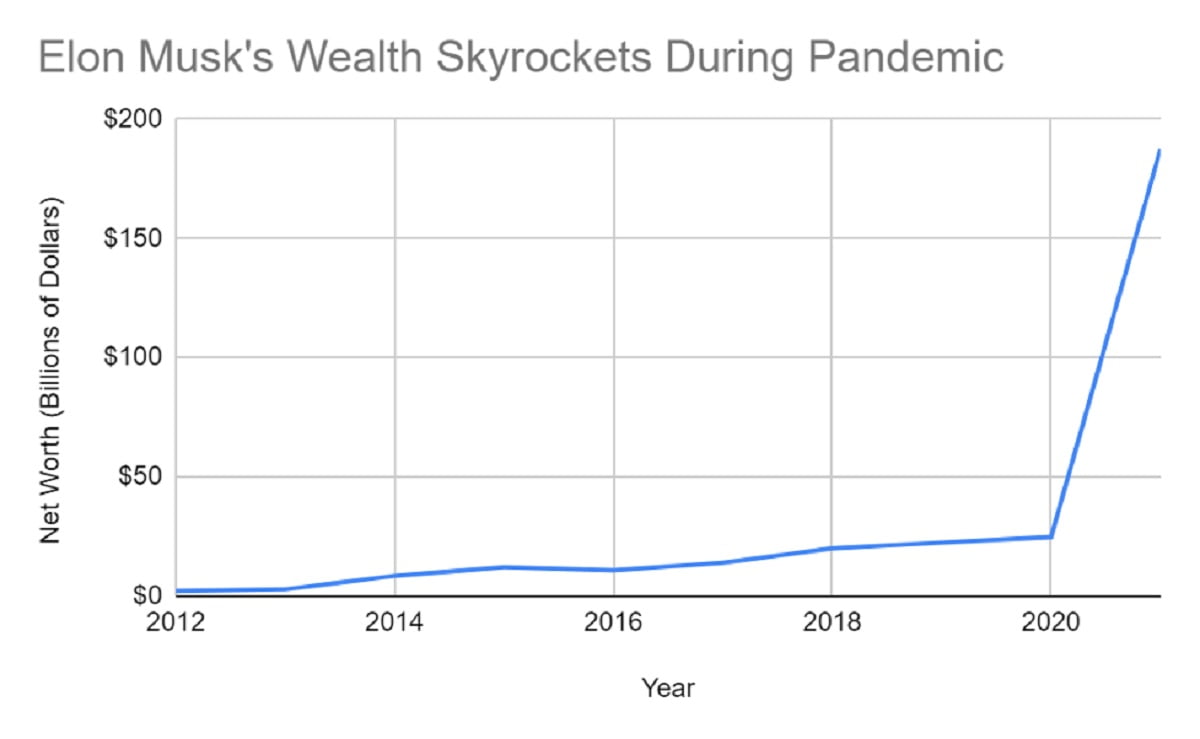 Sources: All data in table is from Forbes and can be accessed here.