In the days leading up to the attack on the U.S. Capitol, the FBI received intelligence that extremists were planning violence as lawmakers gathered in Washington to certify the electoral victory of President-elect Joe Biden.

FBI officials managed to dissuade people in several places from their suspected plans, a senior FBI official said — but there was not enough evidence to issue arrest warrants.

Although the official did not describe the tactics used, it is not uncommon for the FBI to disrupt potential threats by warning suspected extremists, passing the word indirectly through informants or using local law enforcement to pursue suspects for lower-level offenses.

The FBI shared intelligence about potential threats with the Capitol Police, which has been part of the FBI-led Joint Terrorism Task Force in Washington since 1995. But for reasons that remain unclear, a much-criticized security deployment by the police was unable to prevent the storming of the Capitol on Wednesday.

Never miss the most important reporting from ProPublica’s newsroom. Subscribe to the Big Story newsletter.

In recent years, federal authorities have described American extremists as the most urgent terror threat to the country and beefed up resources against them, carrying out a wave of prosecutions this year to head off potential violence as the presidential election approached.

But federal authorities have had more success combating international terrorists than those with a domestic focus, reflecting legal limits on investigations of American political groups, the opaque and elusive nature of the threat, and President Donald Trump’s embrace of far-right groups, experts say.

Insurrectionists at the U.S. Capitol on Wednesday.
Samuel Corum/Getty Images

One fundamental problem is that while federal statutes provide a definition of domestic terrorism, there is not a specific law outlawing it.

The reasons date to 1975, when an inquiry by the Church Committee of the U.S. Senate documented that the FBI had abused its powers by engaging in a pattern of spying on American citizens in groups ranging from the Black Panthers to the Ku Klux Klan. The government placed strict limits on the ability of the FBI and other agencies to infiltrate and track such organizations, with new laws and rules establishing more rigorous requirements for surveillance on Americans than foreigners. Today, FBI counterterrorism officials make a point of saying they target individuals rather than groups, and violent acts rather than ideologies.

Although federal law punishes terror attacks in certain circumstances such as the use of explosives, it does not attach penalities to the crime of domestic terrorism. Authorities rarely file charges of domestic terrorism against suspected American extremists, resorting instead to prosecutions for hate crimes, illegal gun possession and other federal or state violations. Federal agents often cannot use laws that are applicable to international cases, in which charges of material support of terrorism can bring a sentence of 15 years in prison for the simple act of providing a phone card to a suspect linked to a foreign group. Civil liberties protections for Americans make it harder for investigators to persuade judges to authorize wiretaps and other forms of surveillance. Unlike al-Qaida, ISIS and other officially designated foreign terror organizations, U.S. groups such as the KKK are legal, and extremists cannot be prosecuted simply for belonging to or assisting them. 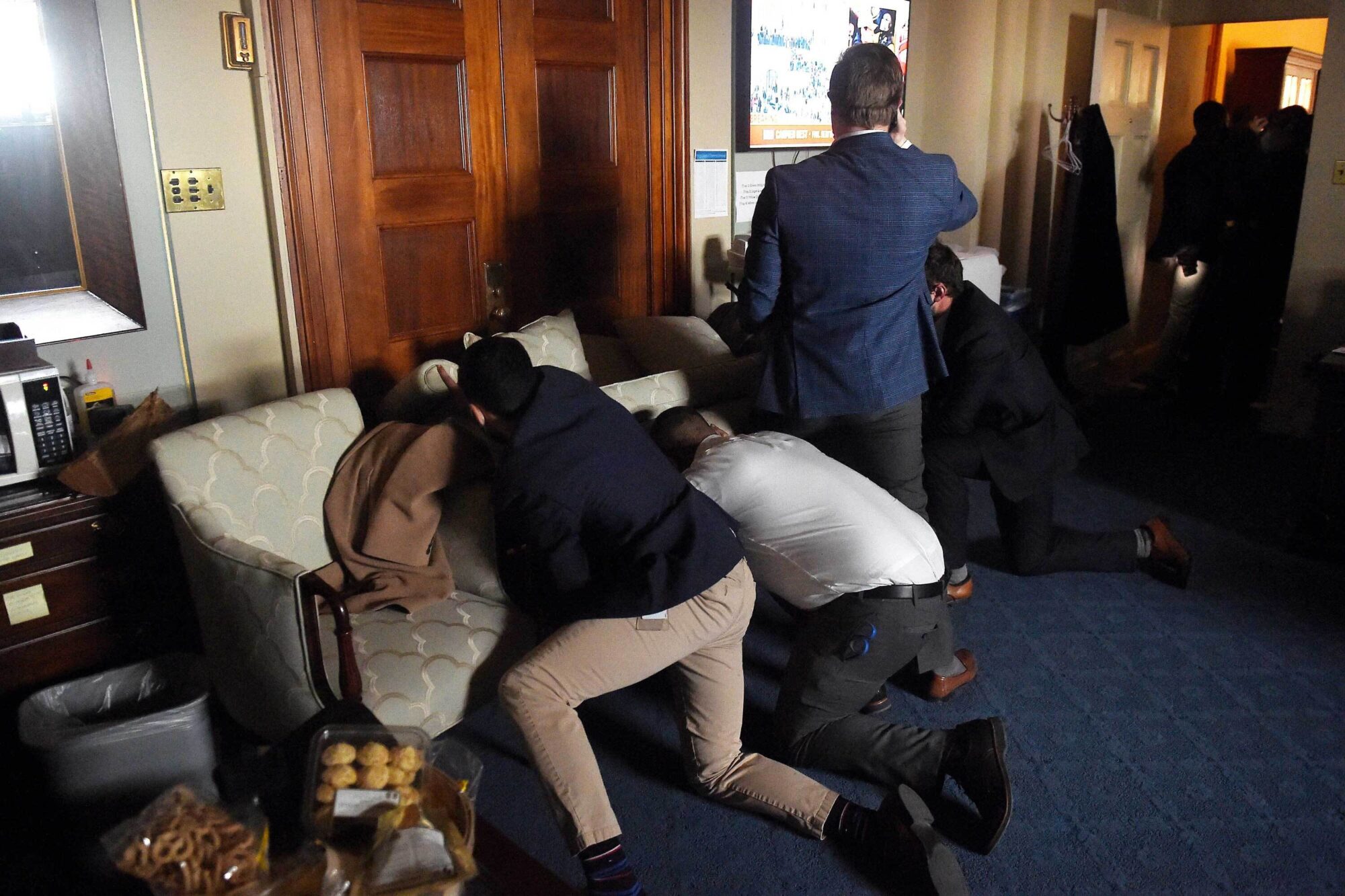 Congressional staffers barricade themselves inside the U.S. Capitol on Wednesday.
Olivier Douliery/AFP via Getty Images

The scenes of congressional representatives cowering on the House floor Wednesday are likely to revive calls for new domestic terrorism legislation. A tougher law, experts say, could have helped authorities prevent the assault on the Capitol — to a point. Although the attack on Congress may fit the textbook definition of domestic terrorism, the perpetrators do not appear to have been the kind of well-organized, heavily armed extremists the FBI has become adept at tracking.

In a separate case suggesting that authorities were watching known groups, Washington city police officers arrested Henry “Enrique” Tarrio, the leader of the right-wing Proud Boys group, soon after he landed in the capital Monday. He was charged with misdemeanor destruction of property and possession of high-capacity firearm magazines in relation to the burning of a Black Lives Matter banner at a local church in December. Authorities have not said that Tarrio was planning any criminal activity this week, however. 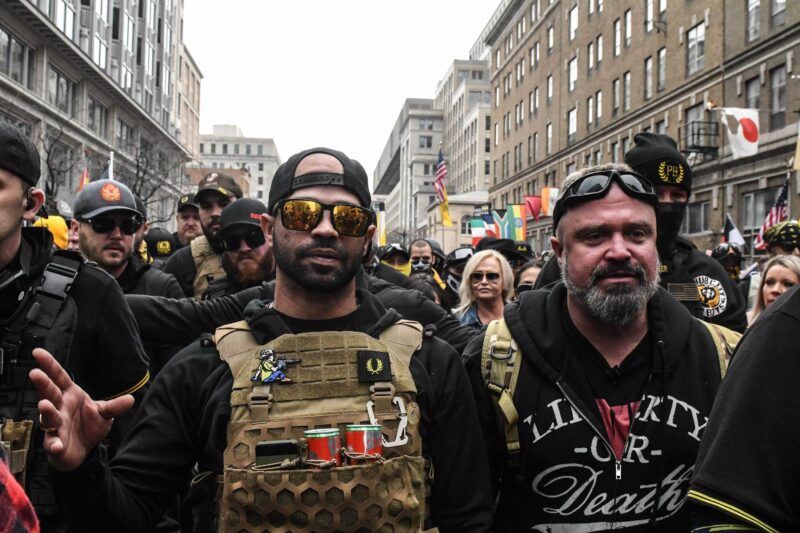 As ProPublica reported Wednesday, supporters of Trump spent weeks railing on social media about their plans to go to Washington and protest violently when Congress met to certify an election that they regard as stolen. Federal agencies closely monitor discussions on extremist platforms.

But the senior FBI official said he was unaware of any hard intelligence — such as operational details — about plans to storm the Capitol.

Veteran counterterrorism officials say the bombast and sheer volume of chatter on those forums make it a challenge to differentiate between plotting and ranting. The FBI, Department of Homeland Security and other agencies also contend with strict legal limits on their ability to track constitutionally protected political discourse.

“You are worried that a splinter group will radicalize and become violent. You are also worried about overreach in watching them,” said a former senior FBI national security official. “You are damned if you do, damned if you don’t. We’ll always be criticized in intelligence collection, for doing too much or not enough.”

Another FBI counterterrorism veteran said he had no doubt about what to call the storming of the Capitol on Wednesday.

“The definition of terrorism is the use of a threat of force or violence to influence the policy of a government,” said retired agent Thomas O’Connor. “You had people who physically and violently broke down doors and stopped a legislative action. This is an act of domestic terrorism, in my opinion.”

During 23 years on the FBI’s Joint Terrorism Task Force in Washington, O’Connor led high-profile investigations across the world, from the al-Qaida bombings of the U.S. embassies in Africa in 1998 to the massacre of 11 people at the Tree of Life Synagogue in Pittsburgh in 2018. He developed a special interest and expertise in domestic terrorism. He was a rarity in that sense. Many agents find the work frustrating and unappealing compared with fighting foreign networks that are designated as illegal organizations and more clearly defined and dangerous.

Nonetheless, the past decade has brought a rise in U.S. extremism, especially on the right. The FBI declared in 2019 that there have been “more deaths caused by domestic terrorists than international terrorists in recent years.”

When O’Connor investigated a left-wing activist who carried out a shooting attack on a conservative research organization in 2012, legal complications forced prosecutors to charge the gunman under city laws rather than federal terror statutes. That experience and others like it convinced him of the need for a statute that explicitly outlaws domestic terrorism and toughens the government’s ability to prosecute it.

O’Connor cited the case of a white supremacist who killed nine people in an African American church in Charleston, South Carolina, in 2015. If the killer had declared himself a radical Islamist, he would have almost certainly been convicted of terrorism rather than a hate crime, O’Connor said. “If you have your family killed in church in South Carolina, I’d think you’d like it to be known that” Dylann Roof “was a terrorist.” 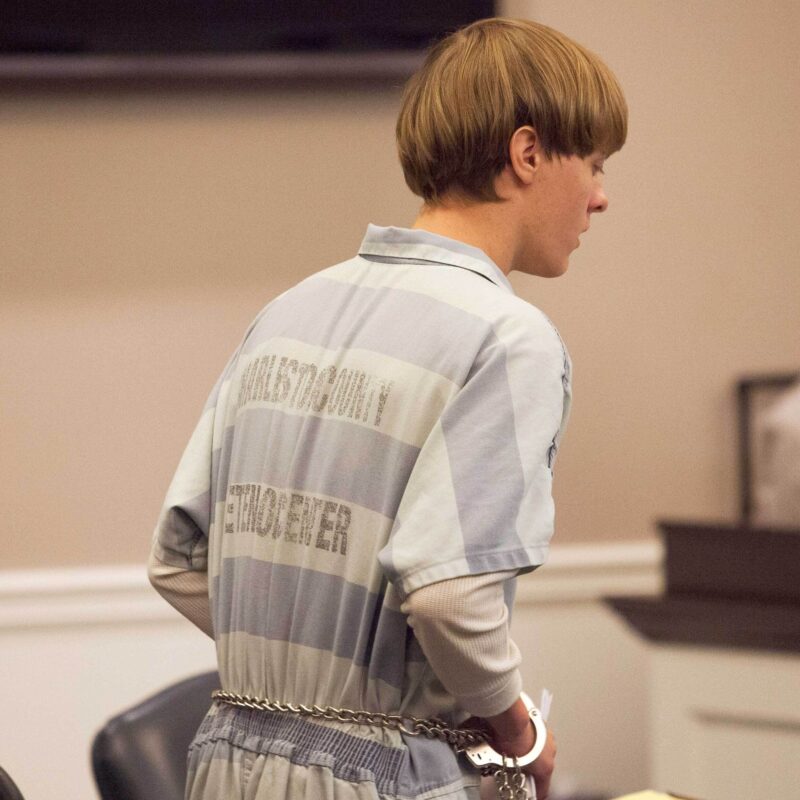 A crucial challenge to passing a new law would be the politically sensitive topic of designating domestic political movements as terrorist organizations. Proposals for legislation have sought to safeguard legitimate political activity while reducing the legal ambiguities of the offense and other obstacles to enforcement and prosecution.

Trump’s repeated description of federal agencies as part of a so-called deep state has also hampered enforcement of domestic terror crimes, O’Connor and other former agents said. Some local law enforcement agencies have held back in assisting FBI-led counterterrorism task forces, the former senior FBI national security official said. In addition, the mutual affinity of the president and far-right groups has discouraged some federal officials from pursuing the threat as actively or prominently as they should, he said.

“To be frank, if you have a president with no message to be proactive against these groups, in fact just the opposite, you will have a lack of enthusiasm if the commander in chief doesn’t support it,” the former senior FBI official said. 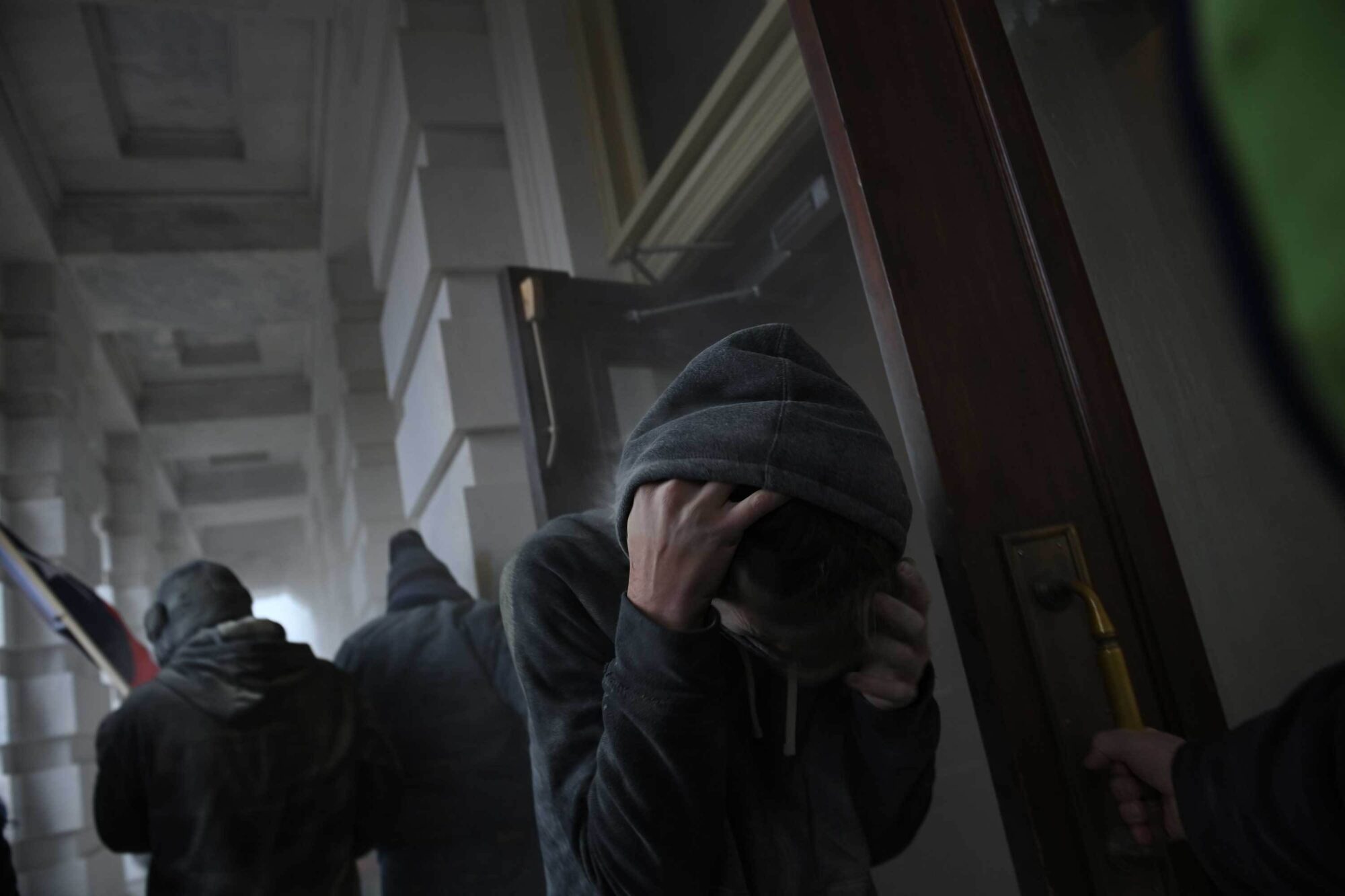 Thousands of pro-Trump insurrectionists had been fueled by his false claims of voter fraud.
Brendan Smialowski/AFP via Getty Images

The Trump supporters who stormed the Capitol may have also benefited from hiding in plain sight. They were not hardcore extremists with a well-developed project such as a bombing or an assassination, the kind of threat FBI agents monitor with intercepts and informants and in chatrooms. Instead, they may have coalesced behind a few leaders with a vague plan who took advantage of weak defenses and mob mentality.

“Sometimes you miss things because they aren’t there to catch,” O’Connor said. “It’s difficult when you have a group doing protected First Amendment activity. You have to walk a tightrope. In this case, there may have been nothing to pick up. No concrete plot.”