The iShares Silver Trust ETF (SLV) has frequently been one of our top ten names over the last several months, despite its less-than-spectacular return. A subscriber asked us why. It’s a good question, so let’s address it here. Let’s start by looking at our top ten names from July 23rd, which was the first weekly featured top names cohort to include SLV.

These were our top ten names on July 23rd, as displayed to subscribers at the time. 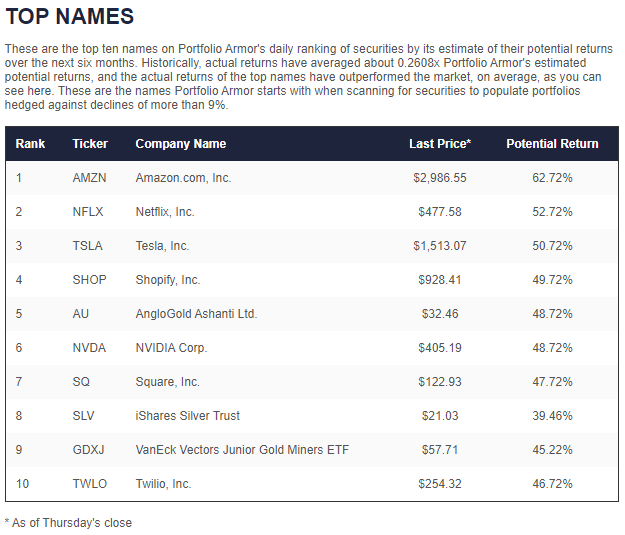 Options Market Sentiment: Why Those Names Made The Top Ten

Here’s a screen capture from our admin panel as of July 23rd, summarizing key steps in the analysis that selected our top ten names. Below we’ll explain the 8th row containing SLV while referring to the columns labeled with red letters. 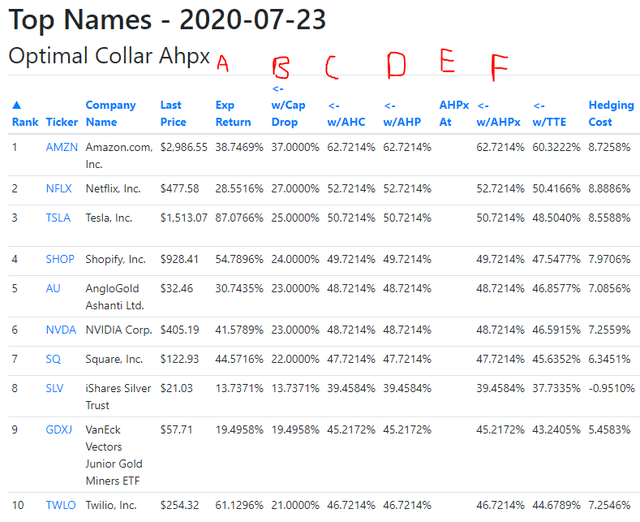 A) The “Exp Return” column was the mean of the average 6-month return for SLV over the last ten years and its most recent 6-month return as of July 23rd. For SLV, this was 13.73%.

B) “w/Cap Drop” refers to the first gauge of options market sentiment we applied to SLV. We attempted to hedge it against a >9% decline with an optimal, or least-expensive, collar over the next ~6 months capped at the figure from the last step, 13.73%. We were able to find collar using that cap, so number stays the same in the B) column: 13.73%. If you look at row 7, you’ll see that with Square, that wasn’t the case. Square has 22% in its B) column because our system had to drop the cap to 22% to find an optimal collar for it against a >9% decline.

C) The “w/AHC” column refers to the second gauge of options market sentiment we applied to SLV. Essentially, it’s a gauge of options skew: we scan for another optimal collar against a >9% decline over the next ~6 months, but this time we used a cap of 1% or the current money market yield, whichever was higher (we used 1% in this case). We want the net hedging cost here to be as negative as possible (for an example of this gauge applied to Tesla, see our previous article, “Finding Alpha In The Current Market Environment“). In SLV’s case, the net hedging cost was one of the ten most negative in our universe on July 23rd. So we increased our potential return estimate for it to 39.46%, applying a boost equal to the outperformance of names that had scored well on that gauge in the past.

D) The “w/AHC” column refers to the third gauge of options market sentiment: whether the securities could be hedged against a >9% decline with an optimal put. Neither SLV nor any of the other names could be hedged this way, so none got a boost in this column.

E) The “AHPx at” column refers to the fourth gauge, which is whether the securities could be hedged with optimal puts against declines smaller than 9%. None could in this case (if they could, the smallest number they could be hedged against would have appeared in this column).

F) The “w/AHPx” column is where the boost for names that passed this gauge would have appeared. Since SLV didn’t pass this gauge, its potential return estimate stayed at 39.46%.

Performance Of The July 23rd Top Names So Far 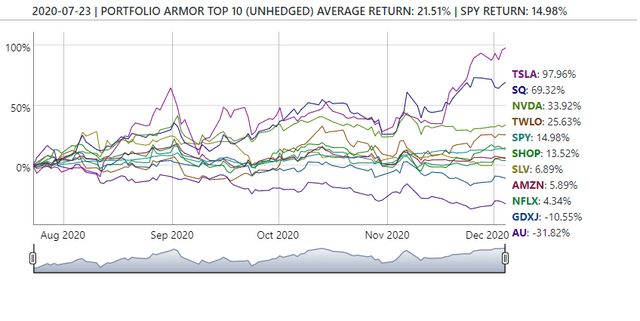 In a nutshell, we select names based on analysis of their total returns and on options market sentiment. Silver’s (and SLV’s) total returns have been relatively weak. So SLV has appeared in our top names frequently this year mainly  because options market participants have been bullish on it. Our guess as to why they’ve been bullish on silver is because they expect 2020’s record fiscal and monetary stimulus to lead to inflation. That hasn’t happened yet, so SLV’s actual returns have been modest.