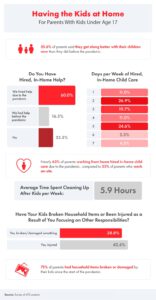 For many, 2020 was the year that couldn’t end fast enough. Health and safety guidelines continue to recommend social distancing and self-quarantine. Some states (including California) have taken added steps in the winter months to encourage people to stay home as much as possible, while COVID-19 cases continue to rise.

For those making an effort to establish a “social bubble” to keep their family members close while limiting any additional social contact, this extra proximity may be turning into too much of a good thing. Distance makes the heart grow fonder, after all, and months of working from home and distance learning mean families are spending more time with each other than they may have anticipated.

Household Expenses During The Pandemic

The COVID-19 pandemic has turned our living situations upside down, and stairlift company Stannah conducted a survey of more than 460 respondents to find out how many people are living with new houseguests (including in-laws and adult children), how stressful it’s been, and exactly home much it’s costing. 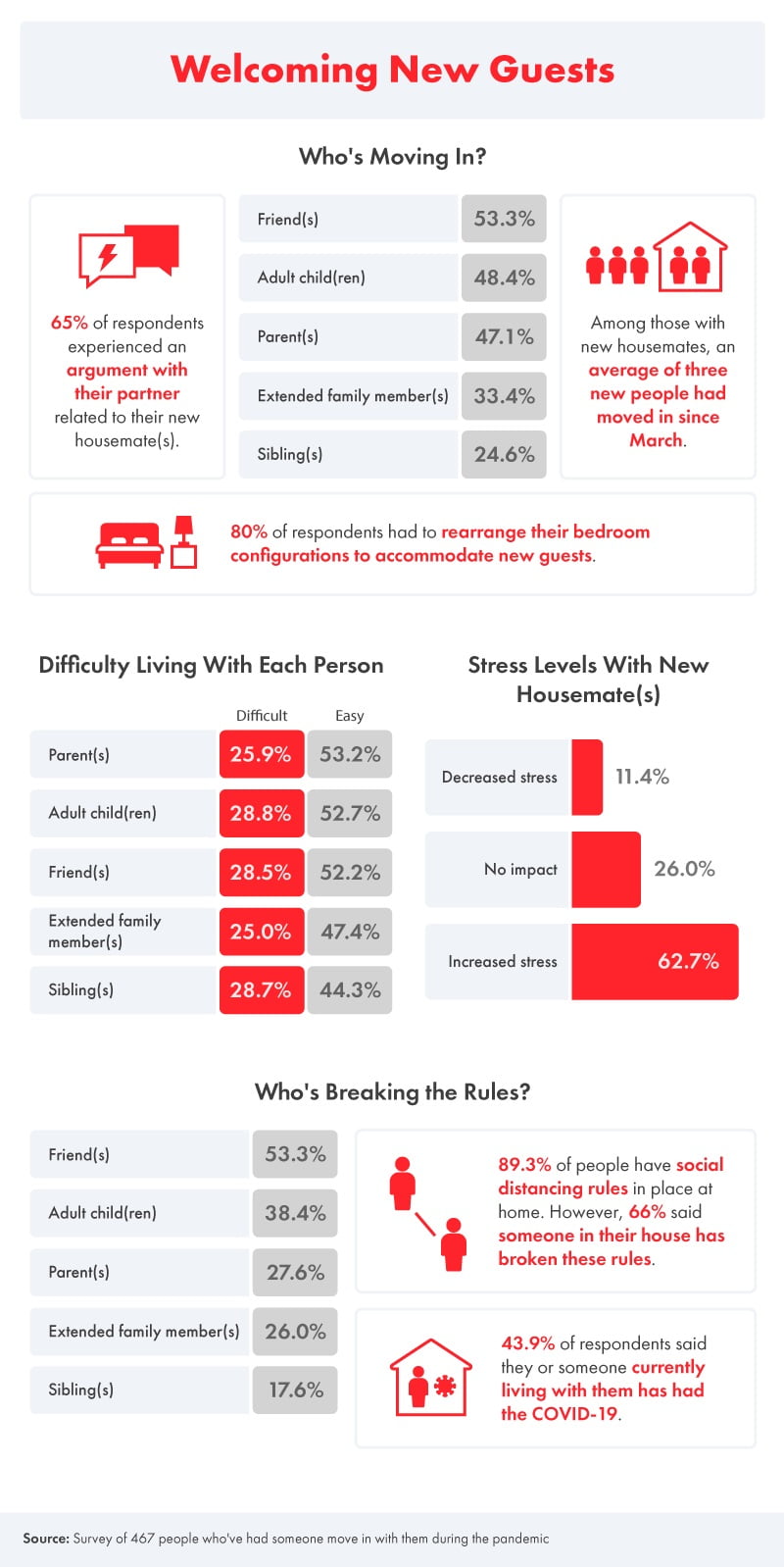 Among people expanding their social bubbles during the pandemic by inviting friends and family for long-term stays, survey respondents reported an average of three new houseguests. The most common additions included friends (53%), adult children (48%), parents (47%), and extended family (33%).

It’s been said that you can’t really know someone until you live with them, and you might not realize how stressful new houseguests are until they move in. Sixty-five percent of survey participants said their houseguests were a catalyst for an argument with their partner, and 80% had to rearrange their own bedrooms to make room for new guests. Overwhelmingly, 63% of people polled said inviting friends and family to move in caused more stress, rating adult children, friends, and siblings as the most difficult to live with.

Expanding your bubble might not come without a literal price tag, either. Average grocery bills went up over $122 a week, monthly utilities increased by $134, and added maintenance costs increased by $93. 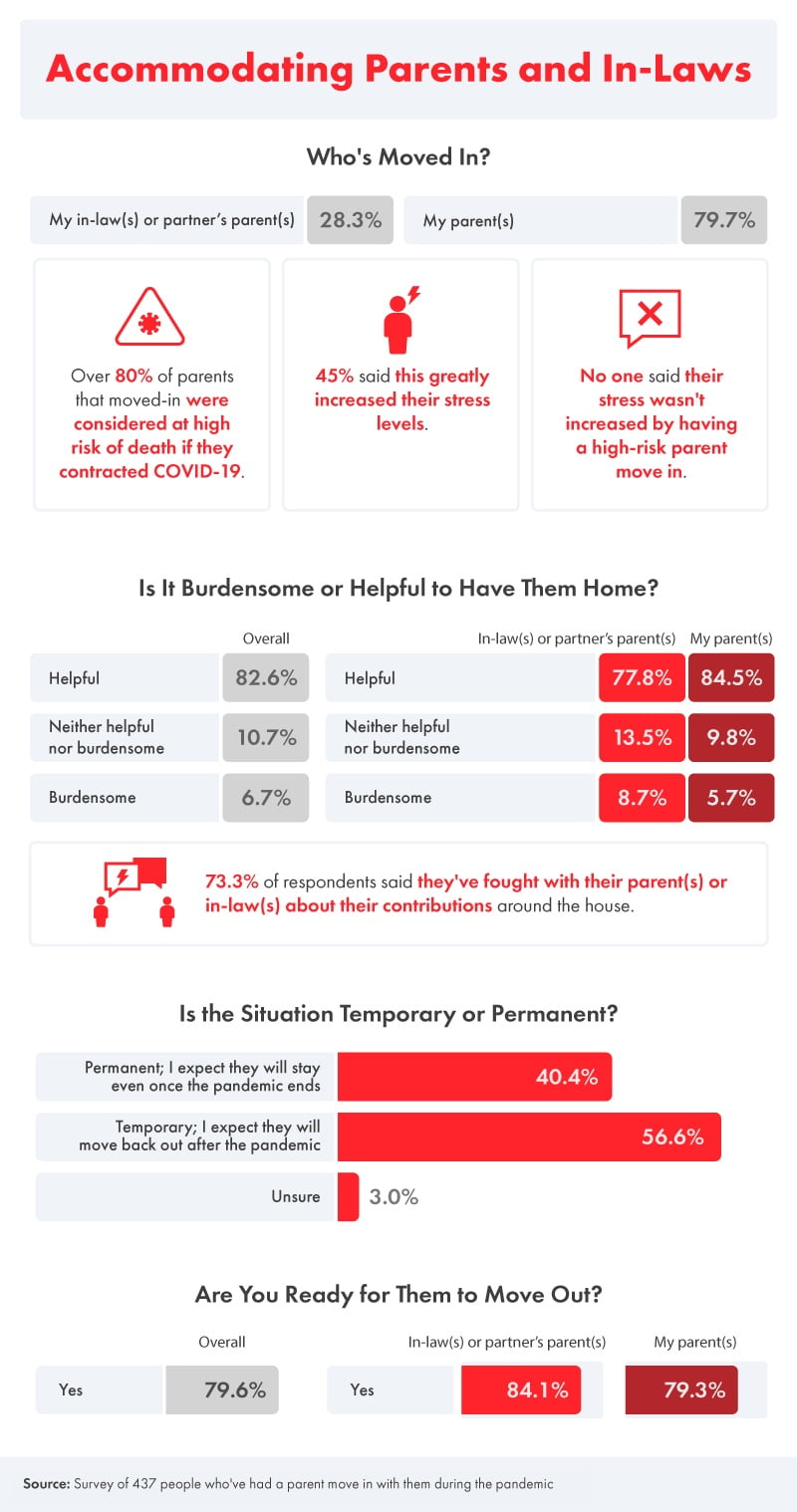 Living With Your Parents (and In-Laws)

Perhaps because a majority were identified as high-risk for COVID-19, many people reported letting their parents or in-laws move in with them during the pandemic. Just because having your parents move in may count as a good deed doesn’t mean it won’t be difficult. Everyone newly living with their parents or in-laws indicated higher stress levels, and 45% said their stress had significantly increased.

Even though many (83%) said their parents or in-laws were helpful during the pandemic, 73% also reported having to argue with their parents about contributing to household expenses, and 40% believed their new houseguests might be permanent additions. 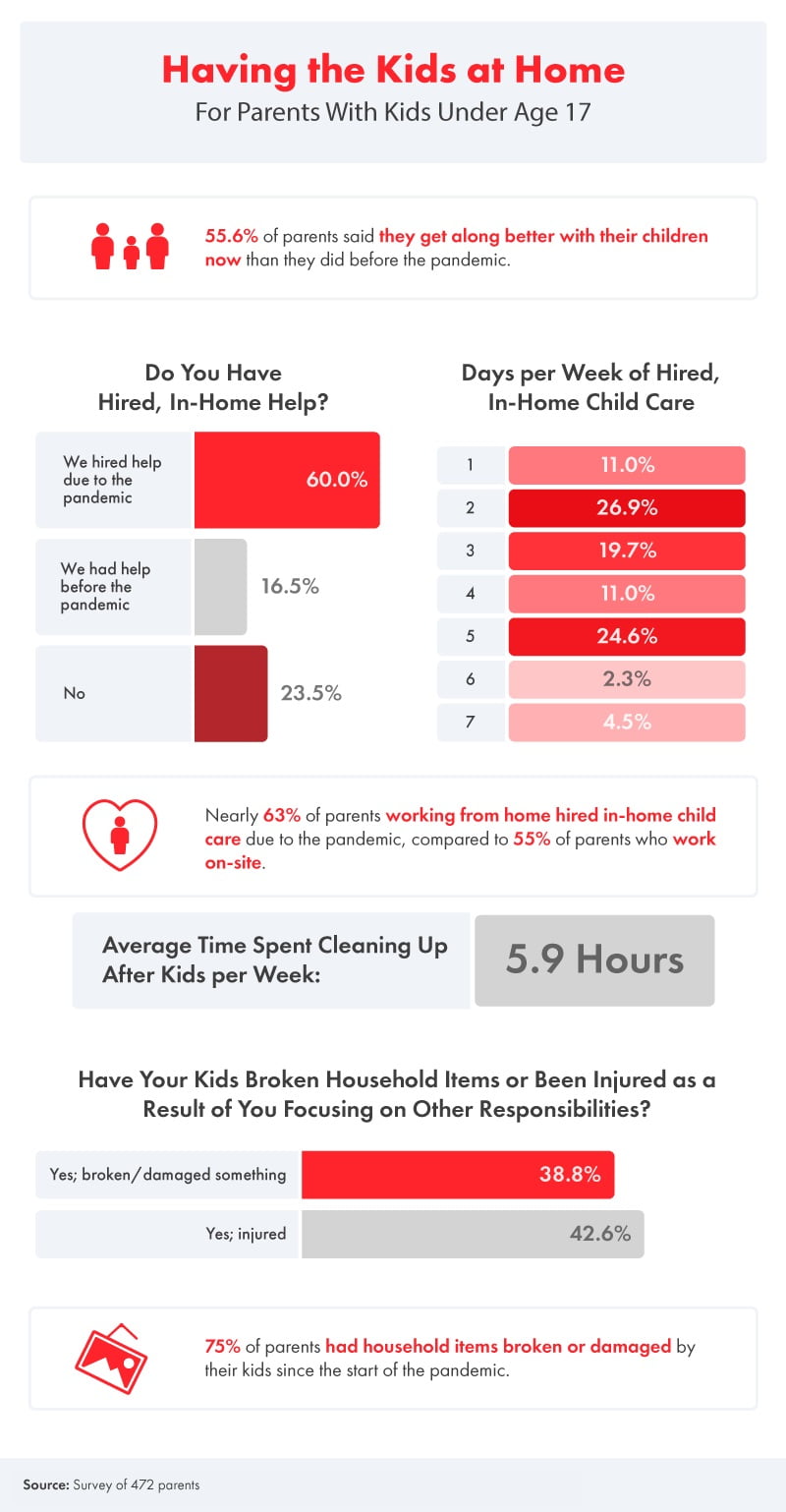 Kids Back in the Nest Due to COVID-19

More than 3 in 4 parents said their adult children moved back home during the pandemic, and more than 2 in 3 said they were charging their children rent. Parents of college students (73%) were even more likely to charge their children rent to live at home again.

Not unlike those living with their parents or in-laws, a majority of respondents said their adult children had been helpful since moving back in, but that didn’t stop them from planning their departure in the future. Sixty-nine percent of parents said their children had plans to move out, and 72% were arguing with their children about contributing to household expenses while living at home.

Parents of younger children also indicated having some struggles during the pandemic. Sixty percent hired in-home assistance to help take care of their children, including 25% who enlisted help five days a week. Parents working from home were more likely to hire extra help than those working on-site. 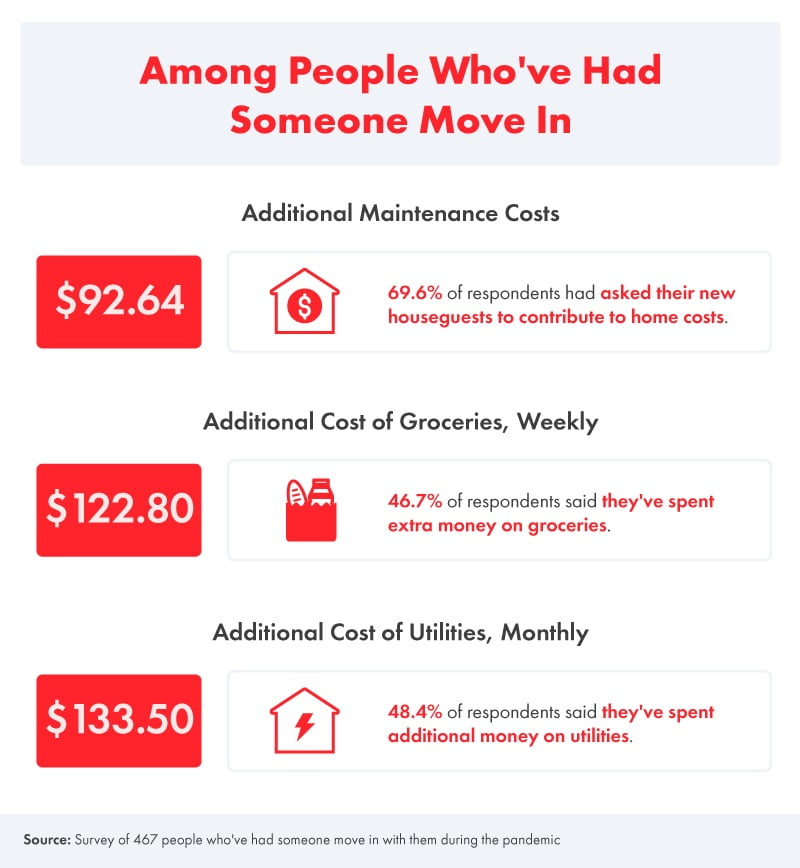 Household Expenses: Making the Most Out of 2020

At the beginning of the pandemic, you might have thought you’d take the extra time to pick up a new hobby or get things done around the house that you didn’t have time for before. Instead, most people spent 2020 just trying to get by and that included managing working from home, having children out of school or day care, and inviting friends and family to move in to keep them safe.

Creating a social bubble is a smart way to limit additional exposure to COVID-19, but it can come at a literal and emotional cost. Among the people surveyed by Stannah Lifts, many had their grocery and utilities expenses go up while having to argue with their family members about contributing to the costs. And though they were ready for these lingering houseguests to make their exit, many also indicated their parents and in-laws might be living with them for the foreseeable future. For these families, 2021 might be shaping up to be more of the same, at least for a little while. 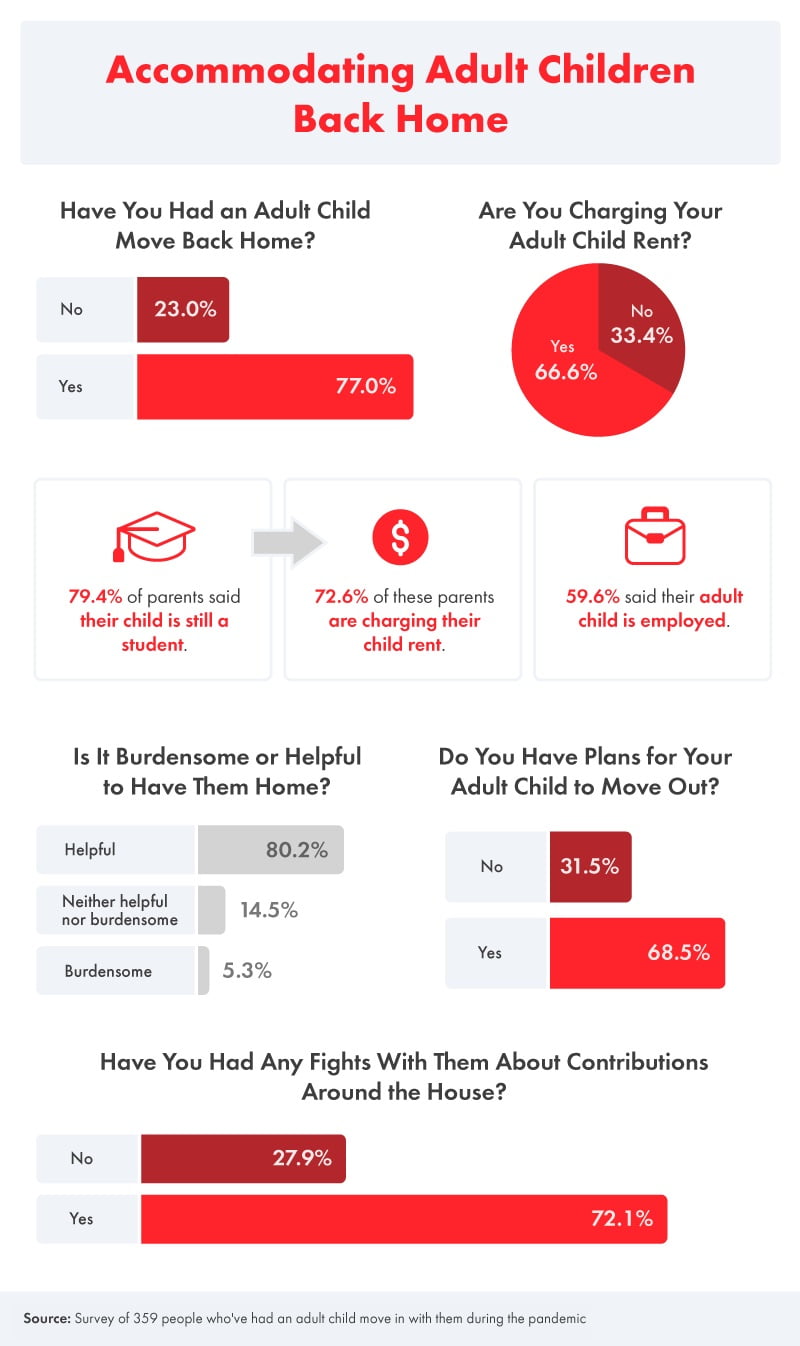 The post The Changes in Household Expenses Due to Pandemic appeared first on ValueWalk.