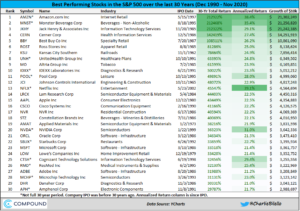 Whitney Tilson’s email to investors discussing the best-performing stocks in the S&P 500 over the past 30 years; Airbnb’s stock price more than doubles; IPOs that have doubled on day one by year; activist short-sellers target Kandi and Luminar; gun owners confront a suicide epidemic.

1) A hat tip to Charlie Bilello, founder and CEO of Compound Capital Advisors, for compiling this list of the best-performing stocks in the S&P 500 Index over the past 30 years: 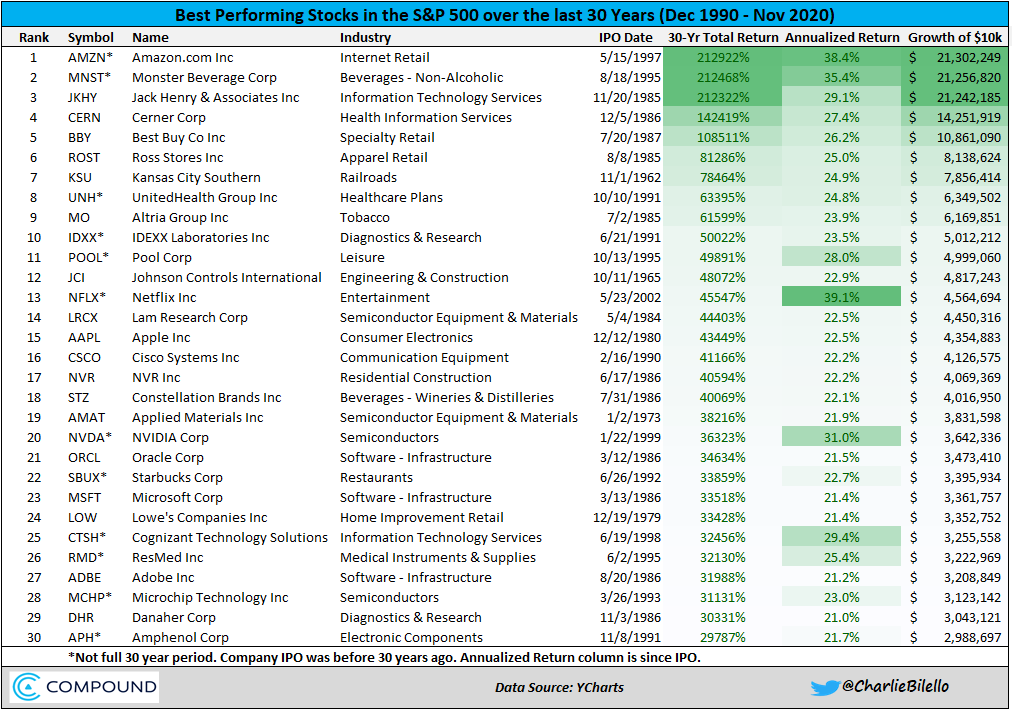 Some I would have easily guessed, but others I’d never even heard of! It goes to show how much money can be made in sectors that don’t get much attention from investors or the media…

2) Wow, the market for initial public offerings (“IPOs”) is white-hot…

The latest evidence is Airbnb‘s (ABNB) astonishing debut yesterday, in which the stock soared 113%. Here’s an article about it on the front page of today’s Wall Street Journal, with a chart showing that Airbnb’s market cap exceeds four major hotel chains combined: Airbnb’s Stock Price More Than Doubles in Market Debut. Excerpt:

Airbnb’s first-day performance is likely to continue to fuel excitement over the IPO market, where investors have been clamoring for shares of hot newly public companies.

“People are just compelled to be invested,” said Jim Cooney, head of Americas equity-capital markets at Bank of America. “Even if you don’t like the valuation of some of these tech companies, you know they’re likely to keep going up, at least in the short term.”

In addition to Airbnb, shares of DoorDash and C3.ai also surged on their first day of trading, jumping 86% and 120% respectively on Wednesday. DoorDash’s stock slipped 1.9% Thursday, while C3.ai continued to rise, gaining 40.6%.

By both volume and stock price performance, these companies are trading into one of the hottest IPO markets in history. So far in 2020, more than $155 billion has been raised on U.S. exchanges, far exceeding the previous full-year record set at the height of the dot-com boom in 1999, according to Dealogic data that date to 1995. 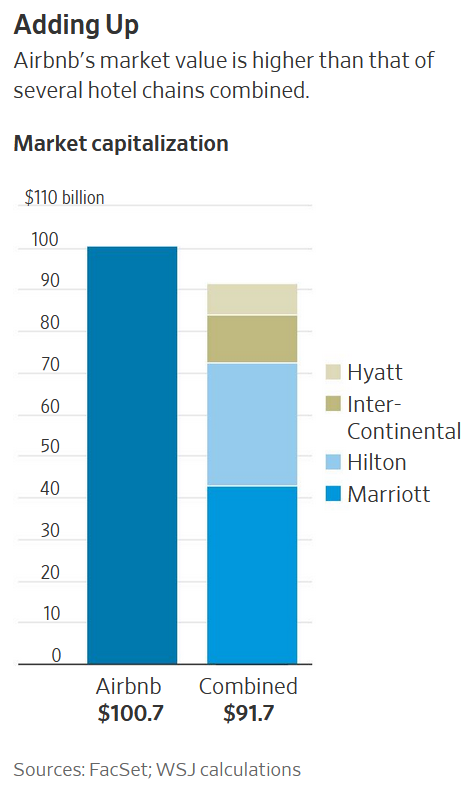 This marks the 19th IPO that has more than doubled on its first day of trading this year – far more than any other year in the past decade, as CNBC’s Leslie Picker points out in this tweet: 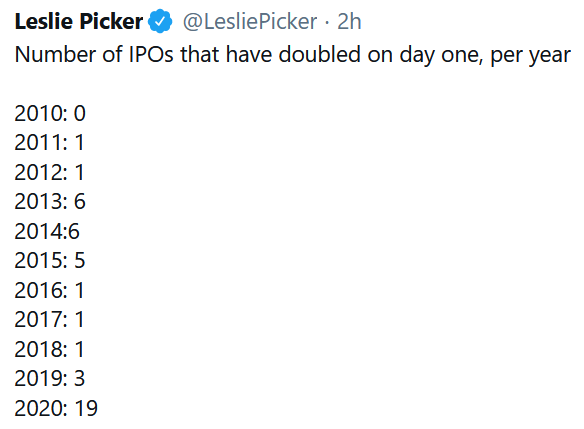 Be careful, folks! Historically, frothiness like this has ended badly – though I’m not calling the top just yet…

IPOs That Have Doubled On Day One By Year

3) In my December 1 e-mail, I wrote about the report on Chinese electric-vehicle maker Kandi Technologies (KNDI) by activist short-seller Nate Anderson of Hindenburg Research, who is best known for exposing all sorts of nonsense at electric-truck developer Nikola (NKLA).

Kandi released a response on Monday, which you can read here, and here’s Hindenburg’s rebuttal.

My take: Anderson has nailed a massively fraudulent company.

4) Speaking of activist short-sellers targeting companies in the automotive sector, Andrew Left of Citron Research is skeptical of the valuation of Luminar Technologies (LAZR), which develops vehicle sensors and related software. He tweeted this on Tuesday:

If Left publishes a full report, I’ll send a link in a future e-mail.

5) I hesitate to write anything about guns because so many people have such strong feelings about them, so please keep in mind that both the article as well as the excerpt from my upcoming book (below) are about something I hope we can all agree on: increasing gun safety…

This article in the New York Times highlights the likely unintended, tragic consequences from the surge in gun purchases this year: ‘How Did We Not Know?’ Gun Owners Confront a Suicide Epidemic. It’s good to see, however, “an unusual alliance between suicide-prevention advocates and gun-rights proponents.” Excerpt:

Gun violence kills about 40,000 Americans each year, but while public attention has focused on mass shootings, murders and accidental gun deaths, these account for little more than one-third of the nation’s firearms fatalities. The majority of gun deaths are suicides – and just over half of suicides involve guns.

People who kill themselves in this way are usually those with ready access to firearms: gun owners and their family members. Gun owners are not more suicidal than people who don’t own guns, but attempts with guns are more likely to be fatal.

For more on this, here’s an excerpt from my upcoming book, The Art of Playing Defense:

Before diving in, I want to be clear that I don’t question the right of law-abiding citizens to have a gun – I just, in most cases, question their wisdom.

The combination of the coronavirus and the George Floyd/Black Lives Matter/Defund the Police movement has led to a surge in people buying guns. Background checks were up 70% year over year in June 2020, for example.

Most people have a gun for safety – to protect themselves – yet ironically, it’s the single thing in their home most likely to harm them or a loved one.

Gun accidents are alarmingly common. Think of the young man who comes home late and is shot by his father, who thought he was an intruder. Or the guy who shoots his friend or wife in a burst of rage (the presence of a gun in a domestic violence situation increases the risk of homicide six-fold). Or the child who plays with a gun and it goes off (tragically, children aged five to 11 are 11 times more likely to be fatally shot in the United States than in any other developed country).

I’ve seen how easily it can happen. In high school, I almost shot my best friend with a shotgun while hunting. I was walking in the lead, and he was 30 feet behind me. Suddenly, a pheasant burst out of the brush behind us, and we both turned at the same time and shot. He brought down the bird. I, on the other hand, saw my buckshot whiz only inches above the top of his head (I didn’t tell him for 20 years)!

But the biggest risk of having a gun in your house isn’t an accident – it’s suicide. There’s a lot of (well-deserved) press around guns being used to murder people, but 60% of gun deaths in 2017 were from suicide, not homicide.

Overall, gun owners are nearly four times as likely to die by suicide than people without guns, even when controlling for gender, age, race, and neighborhood.

The risk is particularly high for first-time gun buyers. A recent study tracked nearly 700,000 first-time handgun buyers in California, year by year, and compared them with similar non-owners, measuring risk by gender. Men who bought a gun for the first time were eight times more likely to kill themselves by gunshot in the subsequent 12 years than non-owners; women were 35 times as likely to do so.

Those who doubt that it matters – “If the first attempt fails, they’ll just do it later” – couldn’t be more wrong. In fact, of the 91% of people who survive their first suicide attempt, 70% never try again and only 7% later succeed.

This is because, contrary to popular perception, most suicide attempts are impulsive, prompted by a fleeting crisis, depression, drunkenness (33%), or drugs (24%). Thus, it’s critical that there isn’t a gun nearby when the impulse strikes.

To understand how important it is to keep guns out of homes, consider this: the suicide attempt rate in South Carolina is 28% higher than in Maryland, yet the suicide death rate is 67% higher. Why? More homes with guns.

In summary, if you own a gun, I strongly urge you to think long and hard about the risk you’re taking. Do you really need it? Unless you live in a high-crime neighborhood, you’ll probably never use it to protect yourself.

If you feel that you must own a gun, at least get a big one – handguns are used in 69% of firearm suicides (65% for males, 88% for females). And make it difficult to access. Keep the unloaded gun separate from the ammunition, which should be under lock and key (and don’t tell anyone in the family where the key is). If you use it for hunting, can you keep it somewhere out of your home?

The post The Best-Performing Stocks In The S&P 500 appeared first on ValueWalk.