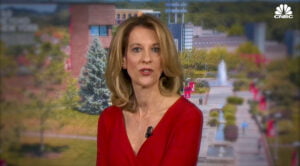 Tomorrow evening, Bernie Sanders’ economic advisor Stephanie Kelton, a leading voice behind the push to spend more on progressive priorities, is appearing in the Intelligence Squared U.S. debate on the motion “Stop Worrying About National Deficits.”

Economic Advisor Stephanie Kelton Debates About The About National Deficits

She’s arguing for the motion alongside James Galbraith, who was Executive Director of the Joint Economic Committee in Congress. Arguing against them are Todd Buchholz, director of economic policy under President George H. W. Bush, and Otmar Issing, former chief economist of the European Central Bank.

Quote from each debater:

Mark Twain famously told us that it’s often easier to fool people than to convince them they have been fooled. And the American people are often fooled into getting confused about government deficits. The word itself sounds like a problem.

Yes, well, boy, I wish I believed in the tooth fairy. I wish I believe that Elvis still lived, and I wish you could scoff at government debt. I’ve got a historical question: Was Alexander Hamilton a fool?

As Keynes said, anything we can actually do, we can afford. If you haven’t started worrying about deficits don’t start. If you have started, stop.

Without constraints, public spending will run out of control. Expecting public politicians to resist the temptation of free public spending. It’s like expecting a dog to sit disciplined before a box of sausages.

What do you think? Tell us in the comments section.