Income and wealth inequality have been attracting a lot of attention recently, especially among progressive Democrats like Vice President-elect Kamala Harris, who presents rising income inequality as an argument against the free market or as a rationale for more progressive taxes. Unfortunately, the quality of the public debate about this topic remains very poor, and the role of gold in hedging against inequality remains unknown. Let’s change it!

There are two main problems with discussions about inequality. First, people often confuse inequality with poverty, although the former occurs when people have different incomes, while the latter is when people do not receive enough money. Many people criticize the inequality divide, but what is really disturbing is that some people have very little to live on.

Second, people do not differentiate between good and bad inequality. You see, there is nothing inherently bad about inequality. After all, it’s only a formal characteristic of the relationship between incomes of different people. What really matters is the reason for inequality. For example, economic progress always causes some inequality, as progress never occurs smoothly, and simply because not all people take advantage of new market opportunities to increase their productivity at the same time. For example, during the Industrial Revolution, workers moved gradually from agriculture to manufacturing, which initially widened the inequality. But should we condemn such an inequality? Should we condemn economic progress? Yes, it’s a rhetorical question.

However, there might also be bad inequality, resulting, for example, from “rent seeking” and lobbying the government to implement beneficial regulations for the influential and already wealthy interest groups (you may think of banks “too big to fail”, subsidies for farmers and other domestic producers, etc.).

Negative inequality may also rise because of the injecting money supply and inflation. How? It’s a very simple mechanism; those who are relatively poor spend more money as a percentage of their expenditure on consumer goods whose prices rise faster, while they have less financial assets as a percentage of their wealth. Therefore, inflation contributes to the rise in income and wealth inequality.

Just consider the quantitative easing programs, which increased prices of financial assets held by a relatively small number of wealthy individuals. For example, the richest 10% of households in the United States accounted in 2007 for 81 per cent of the total value of stocks. So, the central banks’ purchases of financial assets increases income and wealth inequality. Congratulations central bank! Well done!

The relatively poor also lose because they are less able to protect themselves against inflation, they have lower creditworthiness (so they cannot benefit fully from easy money and a credit bonanza), and they are relatively late recipients of new money – I refer here to the fact that newly injected money by the central banks enters the financial markets first. This why the financial markets have expanded so greatly in recent years, and why salaries in the financial sectors have ballooned so much!

And now gold enters the scene. You see, income inequality in the U.S. was falling in the deflationary gold standard period during the second half of the 19th century, while it started rising during the First World War. Next, it fell in the deflationary post-war depression, and again rose in the inflationary 1920s. From a peak just before the 1929 stock market crash until the early 1950s, inequality declined, while from the 1950s to the 1970s it was flat or slightly falling. The trend in inequality changed again in the 1970s, when the gold standard was abandoned, and the pace of monetary inflation accelerated. 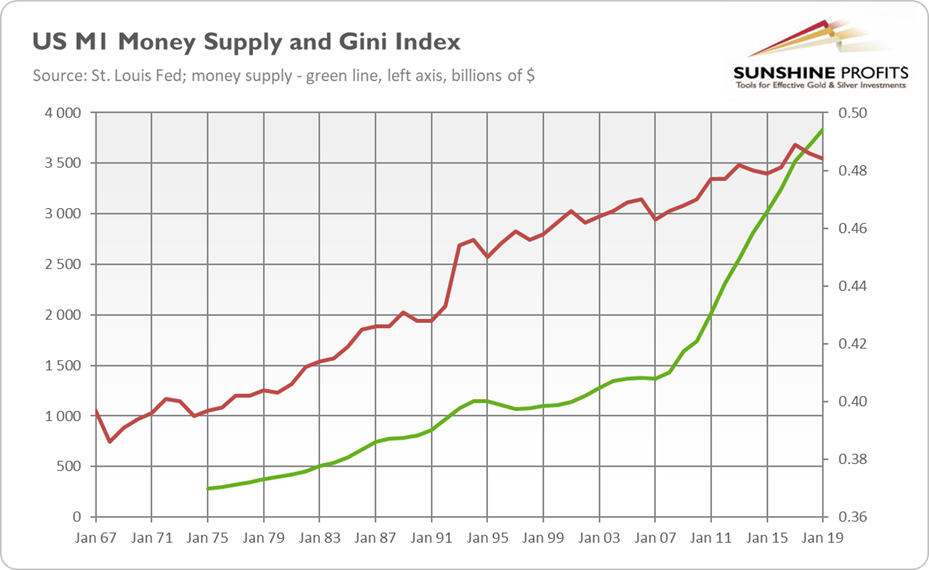 Hence, gold was a hedge against inflation and the related income inequality. Under the gold standard, unlike the fiat monetary system, the governments and central banks couldn’t arbitrarily increase the money supply and redistribute income and wealth through inflation.

What is important to note now is that the pandemic should exacerbate the problem of income and wealth inequality. After all, white-collar workers have more ability to work remotely. The same applies to the pandemic-induced mammoth increase in the money supply, as presented in the chart below. This is good news for the gold market. 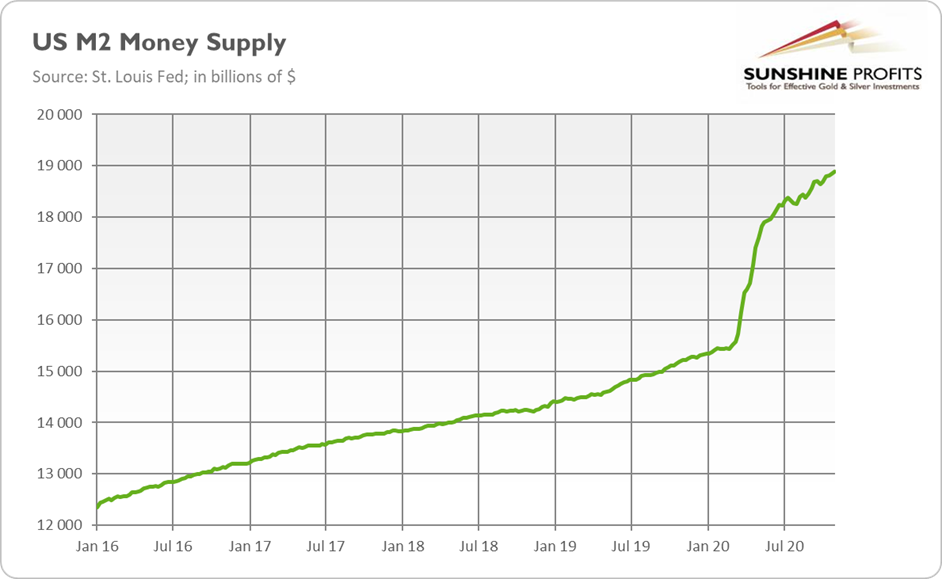 Why? Well, the rising income and wealth inequality, especially if its bad inequality taken to the extreme, may bring populists on both the far-right and far-left to power. The social unrest and a progressive/populist agenda would slower the pace of economic growth, as well as increasing the odds of an economic crisis. Once again, good news for gold prices.

Indeed, the inequality is around the level we observed before the Great Recession. You see, it is not a mere coincidence that the relative income of the top 10% peaked just before the great financial crashes of 1929 and 2008 – it shows that inflationary booms are responsible for rising inequality. But all booms end eventually with busts (or stagflation). Some people believe that the coronavirus crisis was such a bust. However, the day or reckoning may still be ahead of us. The central banks are keeping the interest rates at ultra-low levels, boosting the equity values and pushing many bond yields into the negative territory. But such a situation doesn’t seem likely to be maintained in the long-run, especially since the corporate debt has been rising recently. Hence, given the inherent unsustainability of the current monetary system, gold should remain a viable portfolio diversifier and a safe haven.

Thank you for reading today’s free analysis. If you enjoyed it, and would you like to know more about the links between the economic outlook, the current (past?) crisis and the gold market, we invite you to read the December Gold Market Overview report. Please note that in addition to the above-mentioned free fundamental gold reports, and we provide premium daily Gold & Silver Trading Alerts with clear buy and sell signals. If you’re not ready to subscribe yet though and are not on our gold mailing list yet, we urge you to sign up. It’s free and if you don’t like it, you can easily unsubscribe. Sign up today!