Do you feel the Christmas spirit when it comes to the yellow metal and miners? Because we don’t. Multiple signs over the past few days point to bearish weeks ahead for gold and the gold miners. The VanEck Vectors Gold Miners ETF (GDX) – the most liquid vehicle for investors and traders to gain exposure to gold mining companies – is indicating that things are only about to go downhill from here and a lack of action from options traders only serves to confirm that.

Despite rallying by 8.7% over a three-day stretch, the GDX traded sharply lower on Friday (Dec. 18), and yet again, failed to recapture its 50-day moving average (unlike gold). Moreover, GDX also closed below its early-December intraday high, while the GLD ETF remained above its analogous price level. 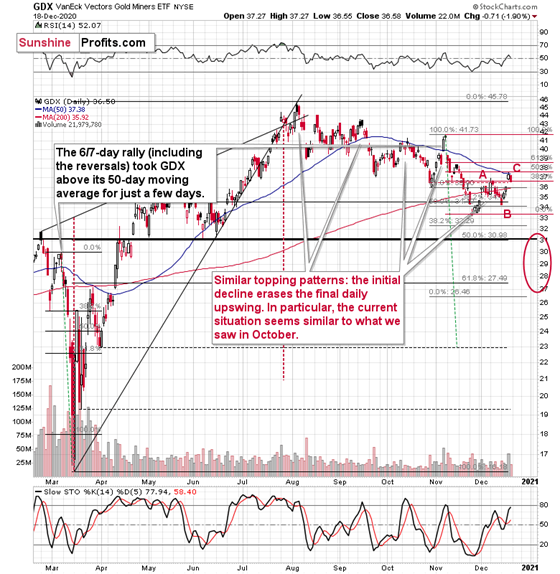 While gold corrected about 61.8% of its November decline, gold miners declined only half thereof. In other words, they underperformed gold, which is bearish.

The GDX ETF moved to its 50-day moving average – the level that kept its rallies in check since early October. Can miners move above it? Sure, they did that in early November, but is it likely that such a move would be confirmed or followed by more significant strength? Absolutely not. Let’s keep in mind two things:

Moreover, please note that the performance of the GDX ETF from late-November to now looks like an ABC correction. This is not a bearish sign on its own, but it fits other indications described today and this week in general. It increases the chance that the top is already in or very, very close.

Another important development was the spike in volume during last Thursday’s (Dec. 17) upswing. It resulted in the largest number of GDX shares traded since the November 6 top (on days when GDX is positive), and we all know what happened to GDX after November 6 (As a point of reference, the four other highest volume days since the November 6 top coincided with declines of 6.13%, 2.74%, 3.40% and 4.29%).

The lack of demand among options traders is another signal that last week’s rally is unlikely to continue.

How high could miners go? Perhaps only to the previous lows and by moving to them, they could verify them as resistance . The previous – October – low is at $36.01 in intraday terms and at $36.52 in terms of the daily closing prices. No matter which level we take, it’s not significantly above the pre-market price of $35.76, thus it seems that adjusting the trading position in order to limit the exposure for the relatively small part of the correction is not a good idea from the risk to reward perspective – one might miss the sharp drop that follows. Please note how sharp the mid-November decline was initially.

Consequently, the outlook is bearish as it seems that miners are ready for another move lower. There’s still a chance that the precious metals sector would move higher based on a possible short-term decline in the USD Index, but this chance is slim, especially given today’s pre-market decline in both the USD Index and gold.

The next downside target for the GDX ETF is the February top in terms of the closing prices – $31.05.

Thank you for reading our free analysis today. Please note that the above is just a small fraction of today’s all-encompassing Gold & Silver Trading Alert. The latter includes multiple premium details such as the target for gold that could be reached in the next few weeks. If you’d like to read those premium details, we have good news for you. As soon as you sign up for our free gold newsletter, you’ll get a free 7-day no-obligation trial access to our premium Gold & Silver Trading Alerts. It’s really free – sign up today.

All essays, research and information found above represent analyses and opinions of Przemyslaw Radomski, CFA and Sunshine Profits’ associates only. As such, it may prove wrong and be subject to change without notice. Opinions and analyses are based on data available to authors of respective essays at the time of writing. Although the information provided above is based on careful research and sources that are deemed to be accurate, Przemyslaw Radomski, CFA and his associates do not guarantee the accuracy or thoroughness of the data or information reported. The opinions published above are neither an offer nor a recommendation to purchase or sell any securities. Mr. Radomski is not a Registered Securities Advisor. By reading Przemyslaw Radomski’s, CFA reports you fully agree that he will not be held responsible or liable for any decisions you make regarding any information provided in these reports. Investing, trading and speculation in any financial markets may involve high risk of loss. Przemyslaw Radomski, CFA, Sunshine Profits’ employees and affiliates as well as members of their families may have a short or long position in any securities, including those mentioned in any of the reports or essays, and may make additional purchases and/or sales of those securities without notice.