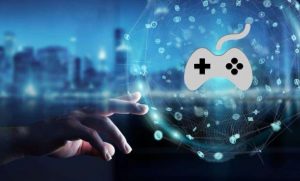 Atari Games, the gaming giant and the pioneer of arcade games might be eyeing cryptocurrency space as gaming crypto tokens is already an expanding multi-billion dollar industry. Atari has been at the forefront of many gaming revolutions and is leading the transformation to the digital in-game token industry as well.

Atari announced its new ERC-20 digital token back in June and launched the first public sale back in November. The legendary game maker revealed that the moto of their token was to “bring decentralization and universality to the video game and interactive entertainment industry.” The Atari token would be used to power online casinos and E-sports betting services as well.

The Atari gaming token is scheduled for an official launch next week.

Fred Chesnais, CEO of Atari recently appeared on Yahoo Finance to discuss the gaming giant’s crypto token strategy and roadmap ahead. During the interview, Chesnais revealed that their utility token would power as many games and services to offer an interactive experience for the gaming community. He went on to reveal that they are highly bullish about the future of gaming based utility tokens and sees the industry as a potential for long-time growth.

The gaming giant’s CEO appeared highly bullish about the crypto industry and discussed various use cases in the form of fungible tokens, NFTs, and collectibles. He said that crypto space is something he doesn’t want to ignore and said that they are working hard to make the most of the opportunities that the nascent industry has on offer.

Chesnais went onto discuss the limitations of the blockchain networks and how he believes that with time it would evolve further to grow as an industry. He also gave his insights on the impact of the pandemic on the work culture and how it has changed the way offices and industries used to function.