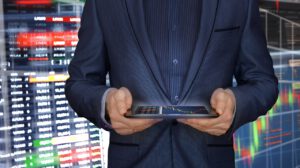 In tenth place is Moderna, which has made headlines for its COVID-19 vaccine, with 750,000 internet searches per month on average. The company is expected to release the final data on its vaccine trial in a matter of days. If the injection is just as effective as it appeared to be from the preliminary data, then things could start moving very quickly.

Moderna will suddenly move from having no product sales to over $13 billion in revenue in 2021, according to Goldman Sachs analyst Salveen Richter. Americans are clearly interested in getting a piece of this company early in its life and capitalizing on one of the COVID-19 vaccines that’s in the works. Modern has already said its vaccine is over 90% effective in preventing the coronavirus.

Number nine on this list of the top 10 stocks Americans want to invest in is the Chinese EV maker Nio, which had 781,000 monthly searches on Ahrefs. Electric vehicle stocks in general have been hot this year, and Nio is one of many of them that have soared in recent months.

Nio recently reported earnings results that beat consensus estimates. The EV maker’s third-quarter revenue skyrocketed 146% to $628 million as it delivered more than 12,000 vehicles. Many investors are drawing comparisons between Nio and Tesla, especially because Nio’s results show it is in about the same position now that Tesla was in four years ago.

Facebook has rallied nicely since the March selloff, climbing even higher than it was before the market rout. The social network has been a favorite of investors for years, having had 1.03 million monthly searches for its stock during the study period, so it’s no surprise that it landed on the list of the top 10 stocks Americans want to buy. Perhaps one surprise is that Facebook is one of only two FANG stocks (Facebook, Amazon, Netflix, GOOGL/Alphabet) on this list.

Tech stocks in general have skyrocketed this year as the COVID-19 pandemic increased adoption of remote options for work and school. Facebook has outperformed the S&P 500.

Shares of Microsoft have surged this year alongside other tech stocks, and investors searched for the company 1.086 million times each month on average. The stock jumped on Tuesday after KeyBanc analyst Michael Turits touted the company’s growing subscription software and cloud businesses. He set his price target at $250. Turits expects Microsoft to grow its annual revenue by 11% in the next few years, mostly thanks to its cloud and subscription software businesses.

For the company’s first fiscal quarter, it reported a 12% increase in revenue and 32% increase in earnings per share. Microsoft has benefited as demand for PCs and cloud computing services has been strong this year due to the pandemic.

Number six on this list of the top 10 stocks Americans want to buy is Advanced Micro Devices, which has also been a favorite for years amid the runup in semiconductor stocks. AMD had 1.1 million searches per month on average. The company wasn’t really impacted by the March selloff much, but it has since rallied tremendously, approaching $90 after starting the year at around $50.

CNBC reported that this year AMD is taking advantage of its huge stock rally to make a massive acquisition. The company reached an agreement to pay $35 billion for rival chip maker Xilinx last month. The semiconductor industry is going through a historic consolidation, and CNBC credits the sizable rally in the sector for that.

The House of Mouse has had a bumpy year since the March selloff, but it has since rallied to about where it was trading before the plunge. Disney received 1.2 million searches per month for its stock. One of the big reasons some have invested or are thinking about investing in Walt Disney this year is due to the launch of its streaming service, Disney+.

Disney has had its share of challenges this year because of the pandemic, which forced the closure of its theme parks around the world. The tourism industry as a whole is in dire straits. The good news for Disney is that there’s more to it than just theme parks, but still, the theme parks are a significant portion of its revenue.

It’s interesting to think that Americans would be interested in buying Boeing, but it is on the list of the top 10 stocks with an average of 2.014 million searches per month. Boeing may actually be the subject of searches because of all the problems it has had this year due to the pandemic.

The company has also struggled with problems in its 737 Max airplane, which has remained grounded due to an investigation. The good news for Boeing is that regulators are pushing toward clearing the 737 Max for takeoff once again after the problems with it have been fixed.

However, the pandemic-related troubles won’t be over for some time. Because air travel has plunged, many airlines have canceled their airplane orders, resulting in mass layoffs at Boeing. The company’s stock plunged in the March market rout and has yet to recover.

The other FANG stock on this list of the top 10 stocks Americans want to invest in is Amazon with an average of 2.274 million searches for its stock per month. Like most other tech stocks, Amazon has soared this year, climbing from less than $2,000 at the beginning of the year to over $3,000.

The steep increase in price may give many investors pause, although many analysts don’t think Amazon is overvalued yet. The company has been a big beneficiary of the pandemic as people preferred to stay home and shop online instead of going out to stores. Some investors have started to rotate out of pandemic beneficiaries like Amazon and into stocks that have been losers in the pandemic in anticipation of recovery, especially following the news of Pfizer’s and Moderna’s COVID-19 vaccines.

Apple stock receives an average of 2.584 million searches for its stock every month. The number of searches has likely increased since the company revealed the iPhone 12 lineup. However, some analysts say the demand from the new iPhone models is already priced into Apple stock.

Apple may be done with catalysts for its stock this year, and it could be carried around by market forces during the last month. The company’s stock soared 80% through the first eight months of the year, although it has climbed a lot less since then. For now, Apple stock may hit the pause button until the next big round of catalysts arrives.

Number one on the list of the top 10 stocks Americans want to buy is Tesla with an average of 5.154 million searches for its stock per month. That amounts to 171,800 searches every day for Tesla stock. The shares have been on a tremendous run this year, especially since S&P announced plans to add them to the S&P 500 in late December.

Tesla stock has climbed nearly 40% since the announcement was made, putting the company’s market capitalization at more than $500 billion. Adding Tesla to the index will be tricky because of its massive size.

The post These are the top 10 stocks Americans want to invest in appeared first on ValueWalk.