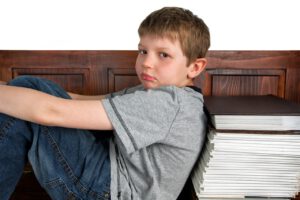 I am a practicing psychiatrist and I treat many patients diagnosed with Attention Deficit Hyperactivity Disorder (ADHD).

People with ADHD have trouble sustaining their attention and shift focus more quickly than other people.

So they can be charming, funny, warm and fuzzy.

They can also be great in a crisis, at sports and in combat.

So when I look for heroes among my patients—those who have braved death to save lives—I need look no further than my ADHD patients.

But ADHD would not be a diagnosis if it weren’t a problem.

ADHD people can have trouble with paperwork and deadlines, jobs and marriage, and tolerating boredom or complexity.

But because they don’t sustain attention they see simplicities others miss.

Life is really simple but we insist on making it complicated.—Confucius

Here are ten great things I have learned from people with ADHD:

I remember brass doorknobs from toddlerhood, trying to reach them as grownups could.

A mechanical wiz with ADHD, sent to my office against his will, and angry about it, decided to show me who was smarter.

Asked me why and told me why.

Because copper and its alloys, particularly brass, are self-disinfecting.

Bacteria on brass die within a few hours.

The toilet was clogged in the men’s room.

An ADHD patient explained to me how to prevent it.

Haven’t clogged a toilet since.

3) ADHD goes HD in a crisis

Comedian Steven Wright tells a joke with a basic truth:

“My nephew has ADHDHD: High Definition Attention Deficit Disorder.  He can barely pay attention, but when he does it’s unbelievably clear.”

In a crisis adrenaline flows.

Or hysterical and screaming.

But ADHD people can save the day.

Adrenaline makes them calm and astute:

Ready, willing and able to handle a fearful situation with aplomb.

Crisis brings out the best of which they are capable.

4) Keep your head while others are losing theirs

Thus ADHD people are the living embodiment of the wisdom of Rudyard Kipling and his timeless poem,

“If you can keep your head when all about you are losing theirs…you’ll be a Man, my son!”

5) ADHD and intelligence are not correlated

In grade school we were placed in classes according to IQ scores.

No one knew about ADHD.

Kids sent to “slow classes” included many who were obviously not “slow,” especially not outside the classroom.

How much talent was lost?

Highly intelligent patients with ADHD can escape diagnosis because they can “pass.”

They find strategies to get the work done, but come home exhausted, from jobs that leave their potential unfulfilled.

A soft-spoken Ritalin patient in a dull job of many years directed me to his website.

He had quietly built a business after hours and become a millionaire—part-time.

“I could never have done it without Ritalin.”

He has “brothers” and a few “sisters” in my practice.

One became so rich so fast he wanted to tip me!

Haven’t taken a tip since I was a bellhop and won’t again.

7) Females with ADHD can escape diagnosis

ADHD is male predominant, probably four to one.

And spot ADHD in males.

And miss it in females.

Just as with autism.

I once sent a breathtakingly graceful and beautiful young female patient with GI distress to the best internist in the building.

Got his angry note and an article about hysteria in the female.

She sought a second opinion.

I wrote a book:

“Anyone Can Be Rich!: A Psychiatrist Provides the Mental Tools to Build Your Wealth.”

I give it to my patients.

A brilliant and successful ADHD patient read it.

When someone hands me a stock tip I always lose money.

When I buy index funds, I always make money.”

Should I still give out my book?

Or this simple wisdom on a paperweight!

9) ADHD patients do not abuse their stimulants

But they don’t abuse their prescription stimulants.

A young ADHD patient on Ritalin gave her purse to her best friend to hold so she could go swimming.

No Ritalin and no best friend.

An aged ADHD patient, hard-working, quite intelligent and observant, could never learn in school.

Neither fully literate nor numerate he is free to read the world on his own.

He is thoroughly unprejudiced.

His best friend was Jewish.

While mourning the friend’s death he heard an anti-Semitic remark.

“It’s all so simple.”—Charles T. Munger

The post Ten Great Things I Learned From People With ADHD appeared first on ValueWalk.