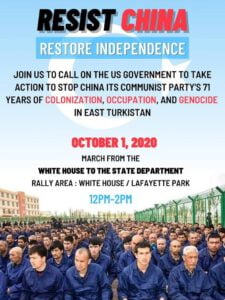 WASHINGTON: The East Turkistan National Awakening Movement invites the media to cover our event on Thursday, October 1, 2020, from 12:30 PM-2 PM in front of the White House (Pennsylvania Ave. across from Lafayette Square) to protest against on the 71st Anniversary of the founding of the People’s Republic of China.

WHAT:  March Against China and Call on the US To Recognize East Turkistan and the Uyghur Genocide

WHERE:  Rally in front of the White House (Pennsylvania Ave across from Lafayette Square) and march to the State Department

Over the past 71 years, the people of East Turkistan have continuously resisted Chinese occupation and sought to regain their independence resulting in countless massacres, severe colonization, and genocide.

In recent years, over 3 but maybe up to 8 (according to China’s latest white paper) million Uyghurs, Kazakhs, Kyrgyz, and other Turkic peoples of East Turkistan have been sent to concentration camps, prisons, and labor camps.

Hundreds of thousands of Uyghurs and other Turkic people are being used as slave labor, and tens of thousands are being killed for their organs as part of China’s organ harvesting campaign. Over 500,000 Uyghur and other Turkic children have been forcibly separated from their families and sent to state-run orphanages and boarding schools to  be raised as “loyal Chinese citizens.”

There is no doubt what China is doing in East Turkistan is a genocide. On July 6, 2020, the East Turkistan National Awakening Movement and the East Turkistan Government in Exile filed a formal complaint urging the International Criminal Court to investigate and prosecute Chinese officials for genocide and other crimes against humanity. We call on governments across the world to support this effort. #We call on member states of the International Court of Justice (ICJ) like Australia, Canada, France, India, Japan, the US, UK, and others to file a parallel complaint to the ICJ and hold China accountable.

ETNAM’s Founder and Prime Minister of the East Turkistan Government in Exile, Salih Hudayar, said, “for decades, China has been engaging in a brutal campaign of colonization and genocide in Occupied East Turkistan. If the world truly cares about human rights, freedom, and the survival of the Uyghurs, it must support the restoration of East Turkistan’s independence.”

The US Government and other governments worldwide should uphold its commitment to ‘NEVER AGAIN’ and stop engaging in trade deals with an evil regime that is holding over 3 million people in concentration camps and engaging in genocide in the 21st century.

ETNAM calls on the U.S. Government to END its Trade Deal with China. We urge the US Government to officially recognize the atrocities as genocide while also recognizing East Turkistan as an Occupied country. The US and other countries in the Free World must TAKE ACTION, through sanctions and other means, to STOP China’s genocide in occupied East Turkistan, and we ask you to join our call.

East Turkistan has been an independent nation at various points in history. The last time it was independent was from 1944 – 1949 when it was known as the East Turkistan Republic. Communist China invaded East Turkistan in late 1949 with the support of Stalin and the Soviet Union. It is a resource-rich region and has in recent years formed a key part of the new Chinese Belt and Road trade route. The Chinese Government has explicitly stated that one of its key National Defence aims it to prevent “the creation of East Turkistan”.

The post Protest Against China: March from the White House to State Department appeared first on ValueWalk.