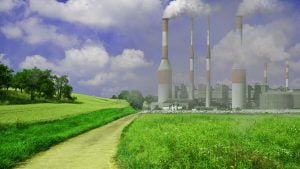 WASHINGTON, D.C. (October 29, 2020) – The New York Times has just reported that, as the effects of climate change become more devastating, and the success of massive global efforts to sufficiently reduce greenhouse gas emission more remote, some scientists are proposing – as a completely outside-the-box tactic at least worth studying – a strategy of solar geoengineering in which massive changes in the atmosphere would reflect more of the sun’s rays back into space. But many are calling the concept a dangerous and illusory fix.

As another outside-the-box idea which might also be worth at least some consideration, a well known scientist has suggested a cosmic alternative to fight global warming – one which does not require any reduction in the emission of carbon dioxide, nor even difficult-to-enforce widespread international cooperation – and which might even cost less then some of the drastic emission restrictions now being considered, suggests professor John Banzhaf of George Washington University, who has a degree from MIT and two U.S. patents.

The basic idea was originally suggested by Matteo Ceriotti, Lecturer in Space Systems Engineering at the University of Glasgow, and involves enlarging the Earth’s orbit to reduce the amount of solar energy reaching its surface when the sun, billions of years in the future, becomes much hotter and expands.

While Ceriotti’s proposal was addressed to a problem still billions of years in the future when Earth would become unbearably hot, the basic concepts of changing a planet’s orbit are well known. Indeed, the science fiction film “The Wandering Earth” dramatizes, although in an unrealistic and cinematic-type way, one such attempt.

Ceriotti admits that his proposal, aimed at moving the Earth from its current orbit to one a full 50% further from the sun [from about 93 million miles to 139 million miles, a distance of 46 million miles], similar to Mars’, while theoretically possible, is clearly not feasible with today’s technology.

However, Banzhaf notes that providing a remedy for the more immediate problems of gradual global warming, on a time scale now being considered by many governments and scientific bodies, would require a much less drastic change in the earth’s orbit which might in the near future become feasible, especially considering the huge costs and major modifications in life style that the alternative of reducing carbon emissions would entail.

What Will Happen If Earth’s Global Temperature Gets Even Slightly Warmer?

The recent and very important UN Intergovernmental Panel on Climate Change report analyzed what will happen when the Earth gets even slightly warmer than pre-industrial levels.

Banzhaf notes that the amount of sunlight (heating energy) falling on the surface of a planet is roughly inversely proportional not to its distance from the sun, but rather to the square of its distance from the sun. Thus, moving a hypothetical planet in an orbit originally 50 million miles from the sun to one twice as far [100 million miles] away would cause the amount of energy falling on its surface to be only one fourth – not one half – as great.

Using these figures, it appears that it would be necessary to increase the average distance of the Earth from the sun by only about 0.3% [290,000 miles out of about 93,000,000] to reduce the heat energy equivalent, which various surfaces on the planet are now receiving, by 1.5°C or 1.5°K.

While this represents only a very rough approximation, it does suggest that changing the orbit by this relatively minute amount could be possible using existing technology and/o new technology likely to be discovered in a few years if such efforts can be funded by hundreds of billions of dollars.

Ceriotti and others have noted that there are many well known ways to change the orbits of bodies in space, and some have actually been used to help redirect interplanetary probes, as well as studied just in case it ever becomes necessary to deflect an asteroid from getting so close to the Earth as to cause serious problems.

These alternative methods for changing orbits, some of which appear to be equally applicable (though on a much larger scale) to possibly nudging the Earth into a slightly more distant [by 0.3%] orbit, include:

Some suggest that nudging large asteroids into new orbits, which could then cause a cumulative sling shot effect on the earth over many years, might be the most feasible alternative – both technologically and economically – in the near future.

Indeed, says Banzhaf, it might be possible to exploit so-called “Δv leveraging” in which a body such as a large asteroid can be nudged slightly out of its orbit and, as a result, years later, it could swing past the Earth, providing a much larger impulse to slightly increase earth’s orbit.

In theory, and perhaps maybe even in practice, large asteroids could be nudged out of their current orbits, and into new ones in a position to help sling shot Earth, by techniques such as a nuclear blast on the asteroid’s surface, having an unmanned spacecraft collide with an asteroid at high velocity, or a combination of both.

Other techniques for nudging asteroids into new orbits include providing a continuous push over a considerable period of time by a space “tugboat” connected to its surface, or by a spacecraft hovering nearby.

While Professor Banzhaf is certainly not proposing that we abandon plans to limit greenhouse gases in favor of a cosmic nudge strategy, and recognizing that all these orbit-changing possibilities would be enormously expensive, he does suggest that this novel idea be at least considered and evaluated, and compared to the huge economic costs of either slashing the emission of greenhouse gases, or using massive solar geoengineering.