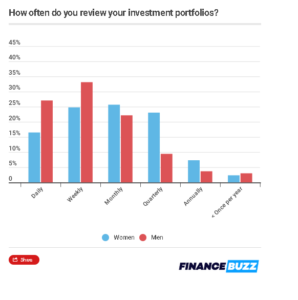 Investing makes it easier to create a more financially secure future — which is more important than ever during these turbulent times. Money you’ve invested earns interest, which in turn can be reinvested to earn interest of its own. If you have learned about investing you know that this is called compound interest, and it makes building wealth much easier. Over the long term, that interest adds up, making it easier to save for retirement or another significant expense.

While investing can be an important way to build wealth over time, a new survey conducted by FinanceBuzz revealed some big differences between how men and women invest. But the good news is, around 71% of Americans are investing their money.

These differences in investing styles show how men and women learn about which assets to buy, the key features that individuals of each gender consider when choosing their investments, and more.

Here are three of the biggest differences between men versus women when it comes to how they invest.

1. Learning how to invest

Understanding how to choose investments and developing a sound investing strategy can make a difference in how successfully your investments perform. Unfortunately, more women than men don’t know how investing works, with 23% of women admitting their confusion on this important topic compared with 16% of men.

Statistics Of How Both Genders Learned About Investing

One possible reason men are more informed is they receive more financial education early. While 15% of men said they learned about investing in high school or college, just 9% of women reported receiving this type of education.

2. Choosing where to invest money

There are vast differences not just in how men and women acquire investing knowledge but also in how they decide where to put their money.

When considering where to invest, both men and women care most about the types of accounts offered. Forty-six percent of women and 43% of men reported this is an important feature.

Women placed a higher priority than men on both an easy-to-use app and strong customer service, with 39% of women saying a good app is one of their top five features and 38% stressing the importance of customer service. And while 32% of women listed the availability of human advisors as one of their top five features when deciding where to invest, only 28% of men agreed.

Experts recommend checking your investment portfolio no more than once per quarter, as doing so more often can lead to making shortsighted decisions.

Americans of every gender should be investing

Regardless of your gender, it’s essential to learn about investing so you can put money aside for your future in a smart way. The good news is, it’s easy to get started. If your employer offers a 401(k), you can sign up at work and have contributions taken directly from your paycheck. Your employer may even provide matching funds, which are free money.

If you don’t have a workplace 401(k), investment apps such as Stash make it easy to get your money into the market. Or, if you prefer a more hands-off approach to investing, you can opt for a robo-advisor, which picks investments for you based on your answers to a few simple questions. With so many options out there, everyone can find an investment option that works. And everyone should, because if this year has taught us anything, it’s that life is uncertain, and it’s important to be prepared for whatever comes your way. Having a hefty nest egg can help you to do just that.

The post Investing Habits Differ Between Men and Women: Here’s How appeared first on ValueWalk.