ProPublica is a nonprofit newsroom that investigates abuses of power. Sign up for ProPublica’s User’s Guide to Democracy, a series of personalized emails that help you understand the upcoming election, from who’s on your ballot to how to cast your vote.

There’s an important pitfall to look out for this election season: misinformation. This kind of stuff shows up in the form of Facebook pages impersonating candidates, sketchy digital campaign ads and fabricated news content designed to deceive. Each and every piece of misinformation can have major consequences. Perhaps you’ll recall, a year and a half after President Donald Trump was elected, Democrats on the House Intelligence Committee released thousands of Facebook and Instagram ads placed by Russian operatives to interfere in the 2016 election.

Sign up to learn how to become a more informed, more engaged citizen with ProPublica’s User’s Guide to Democracy.

To better understand the universe of misleading political information, and how to know it when you see it, we talked to Claire Wardle, executive director of First Draft News, an organization of social newsgathering and verification specialists dedicated to fighting mis- and disinformation online. (First Draft is also a partner in ProPublica’s Electionland project, helping us search the internet for content that could interfere with people’s voting!)

What Are the Different Kinds of False Information Online?

First Draft has classified seven distinct types of mis- and disinformation swirling around our information ecosystem, from satire or parody to fabricated or manipulated content: 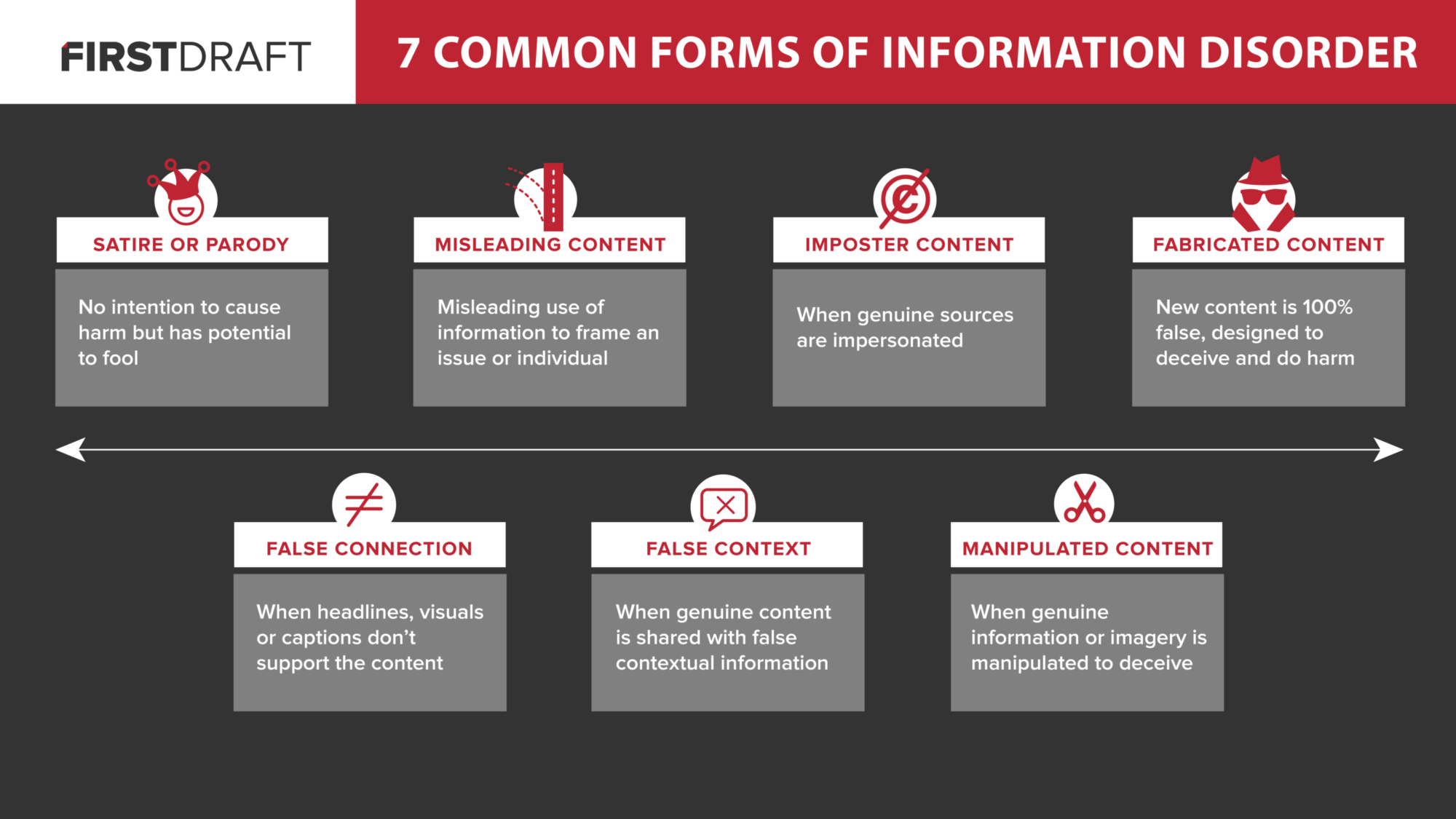 As we saw in the 2016 presidential election, some disinformation is driven by foreign governments or organized nonstate actors in order to interfere with an election. “We think a lot about countries like China, Russia or Iran who might be doing this for political reasons,” Wardle said.

Here are some of the biggest themes First Draft is seeing this year:

How Can I Tell What Election Information to Trust?

Here are some tips and tools that can help you assess content online.

If you see an image claiming to be proof of voter fraud: Run a reverse image search on Google. Go to images.google.com, click the camera icon and upload the photo. “You might find that it’s a real ballot box, but it’s from Kenya or Brazil. Often it’s genuine, but it’s used in a different context,” Wardle said. “You might see that it’s been debunked by PolitiFact or somebody else who has already gotten out there to say, ‘No, this is false.’ A reverse image search will also reveal whether a photo has been photoshopped by pulling up all similar images and allowing you to identify suspicious variances.

If you see a particularly dramatic political article from a news site you’ve never heard of before: Does it have an About Us page? Does it have a mailing address at the bottom? Does it have a Wikipedia page? These are some markers of real news sites that you’ll want to look out for.

Practice emotional skepticism: Many of us are susceptible to fabricated content because of our emotions and the way they interact with our biases. “It doesn’t matter how educated you are; it doesn’t matter whether you’re left or right,” Wardle said. “We’re vulnerable because as humans we’re drawn to information that reinforces our worldview. We want to consume information that makes us say: ‘Yeah, that’s what I thought. I’m right.’ So what that means is we’re really bad at taking on different types of information and we resist them.

“When you’re reading information, if it makes you angry or makes you want to share it with your best friend immediately, then recognize that you are having a visceral response to something. And in the moment, the part of the brain that is critical is not working,” Wardle said. “If you have that reaction, just slow down because your brain hasn’t caught up with your heart.”

Here are a few instances ProPublica and our partners have spotted over the years:

Tweets that promote wrong information about the voting process, such as nonexistent voter ID requirements.

Help Us Help the Election

As we mentioned before, Electionland is a coalition of newsrooms across the country that have banded together to help report on issues keeping people from voting in the election. Mis- and disinformation is just part of it. From now through Election Day, you can tell us about voting problems in your area.