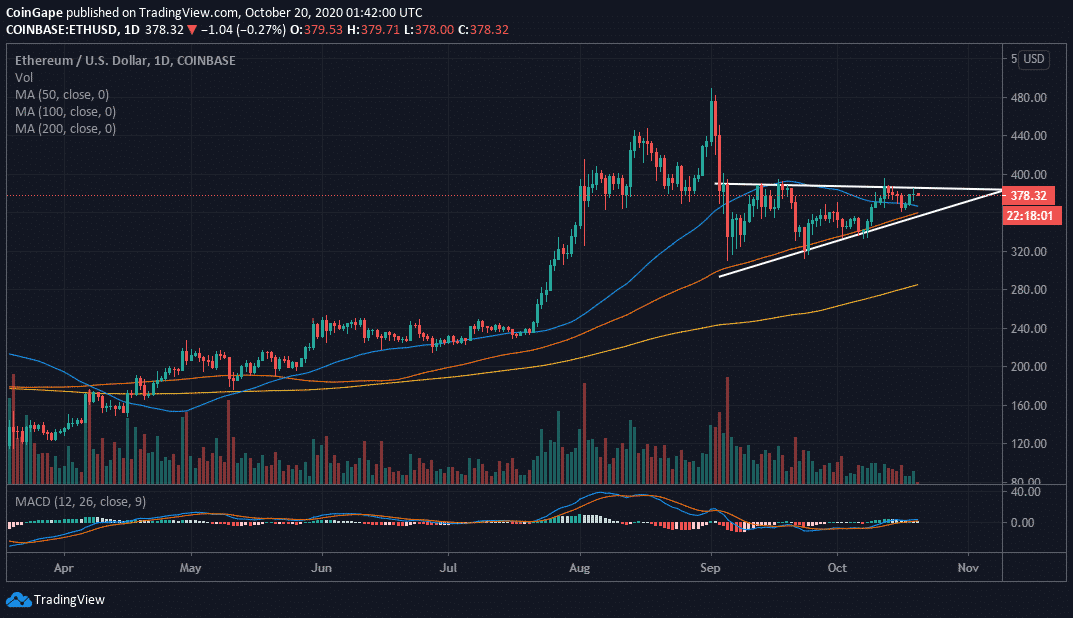 Ethereum is hammering at the resistance highlighted by the ascending triangle and the $380 zone.

A breakdown cannot be ruled out because of the formation of the triangle pattern.

The smart contract token seems to have hit pause at $380 following a steady but gradual recovery from $360. Gains above $380 are required so that buyers can shift the focus to $390 and $400, respectively. At the time of writing, Ethereum is trading at $379 where a bearish momentum is building.

Looking at the daily chart, the Moving Average Convergence Divergence (MACD) shows the gradual bullish momentum is fizzling out after crossing into the positive region. However, a minor divergence is still visible, suggesting buyers have the ability to regain control.

In addition to the resistance at $380, an ascending triangle pattern is also standing in the way, hindering movement. It is almost certain that Ethereum will reverse on hitting the triangle resistance again.

Ascending triangles are mainly regarded as bearish indicators or continuation patterns because breakouts usually occur in the same direction as the preceding trend. Therefore, ETH/USD is far from safety because a breakout below the lower ascending trendline could see the price retesting support at $320 if not $340.

The 50-day Simple Moving Average (SMA), slightly under the price is likely to absorb some of the selling pressure in case of a reversal. Another anchor is expected at the 100 SMA and last week’s key buyer congestion zone at $360.

It is worth mentioning that the bearish outlook will be invalidated if the triangle resistance is broken. Action above $380 might boost Ethereum towards $400 and other higher levels.