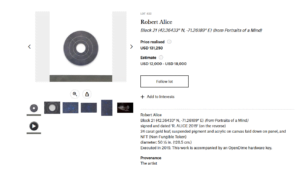 Christie’s First Auction of Blockchain Related Artwork ‘Block 21’ Sells for over 10 Times its Estimate at $131,250

A world record for an NFT at public auction, ‘Block 21’ Sells for over 10 times its estimate, making $131,250 in Christie’s First Auction of Blockchain Related Artwork

The physical painting and digital NFT (Non-Fungible Token), estimated at $12,000-18,000, sold at the world’s most prestigious auction house in New York alongside works by Monet, Picasso and Warhol

New York, NY – October 8 , 2020  – A historic evening for the blockchain community and Christie’s was concluded on Wednesday with the runaway auction of Block 21 (42.36433° N, -71.26189° E),  the first blockchain focused artwork and Non-Fungible Token (NFT) sold by the world’s most prestigious auction house. Eighteen bidders, from across three continents, bid online and by phone in a heated four-minute bidding war and the work sold for over 10 times its estimate, realising $131,250. The artwork was viewed online over 3,000 times at Christies.com.

The culmination of the high level auction, which featured works by Warhol, Louise Bourgeois, Ed Ruscha, Martin Wong and Yayoi Kusama, resulted in a major moment for the cultural appreciation of Satoshi Nakamoto’s revolutionary codebase.

“While the discussion around value is inherent to the blockchain ecosystem, price is just a footnote to this story. What is of more value to our community is the knowledge that Satoshi’s codebase, one of the most important cultural documents of the 21st century, and the centerpiece of Portraits of a Mind, has stood shoulder to shoulder next to the great artworks of our modern civilization. Over the course of the last 2 weeks, millions of people around the world have aesthetically engaged with this codebase and the concept of NFTs. Art has shown its power as a gateway to a more nuanced and cultured understanding of blockchain’s place in the world. This is only the start for Robert Alice, and I look forward to provoking more conversations around blockchain’s role in our future society”

Alongside the painting, the anonymous buyer of Block 21 received access to unique NFT, a core part of the artwork. Created by Robert Alice and developed by the leading NFT specialists Async Labs, the NFT is spatiotemporally connected to the artwork– meaning that the digital component of the artwork is only visible during daylight within the time zone in which it is geographically located. As the owner of the NFT, the buyer can control the visibility of the artwork by changing where it is located.

“Christie’s is delighted to have been entrusted with this innovative work – part of which is the first NFT that we have ever offered at auction – and are very pleased that it culminated in such a fantastic price realized. The result we hope speaks to Robert Alice’s Portraits of a Mind as a landmark work of art for the blockchain space and an important contribution to art history. It has been a series of firsts for us and we have enjoyed welcoming the crypto community to our galleries.”

Block 21 is a part of Portraits of a Mind, a global art project decentralising the founding code behind Bitcoin into 40 fragments. The project launched at Christie’s New York, the world’s most prestigious auction house, on October 1st.

About Portraits Of A Mind

Portraits of a Mind is the largest work of art in the history of blockchain technology, with 40 paintings stretching more than 50 meters long and forming a complete hand painted transcription of the 12.8 million digits of code (v0.1.0) that launched Bitcoin, the world’s first cryptocurrency.

The Robert Alice project was founded by Benjamin Gentilli, a London-based artist in 2018, to promote blockchain culture within the visual arts.

The post Christie’s Auction of Blockchain Related Artwork Sells For Over 10 Times its Estimate at $131,250 appeared first on ValueWalk.