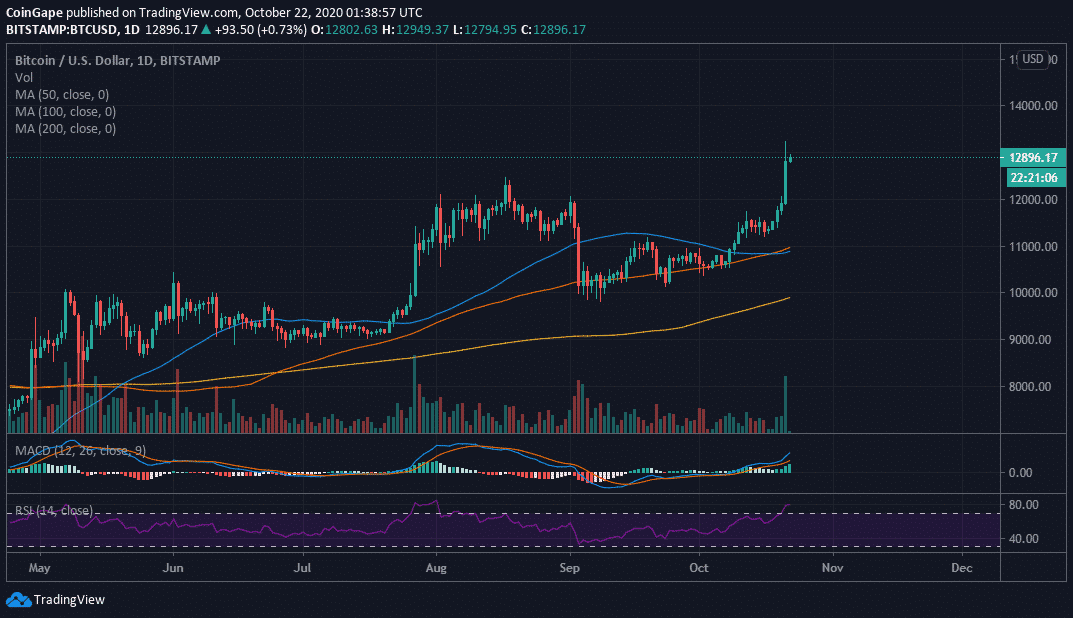 Bitcoin had a smooth sailing in the past few days, first bringing down the resistance at $11,800. The bullish momentum paced upwards, allowing the bulls to smash through the crucial $12,000 level as discussed on Wednesday. The bullish leg did not stop here, but soared to trade new yearly highs at $13,237.

Meanwhile a minor retreat has seen the flagship retreat under $13,000. BTC/USD is doddering at $12,900 amid a building bullish momentum. Looking at the Moving Average Convergence Divergence (MACD), buyers appear to be comfortably sitting in the cockpit, ready to push the throttle forward.

A bullish divergence above the MACD shines a light on the massive influence bulls have on the. The Relative Strength Index (RSI) confirms the bullish narrative as it settles in the overbought area.

According to IntoTheBlock’s IOMAP model, Bitcoin has no substantial resistance that could seriously hamper movement beyond $13,000. However, the minor seller congestion in the region between $13,286 and $13,672 must come down, to bring gains to $14,000 into the picture. Here, nearly 120,000 addresses previously purchased almost 67,000 BTC.

On the downside support gradually intensifies towards $11,000. On the other hand, the most robust anchor zone runs from $11,335 to $11,722. Here, approximately 2.5 million addresses previously purchased around 1.2 million BTC.

It is worth mentioning that overbought conditions tend so signal a potential reversal for a given asset. Therefore, it is essential that traders are aware of a possible retreat. Besides, bullish markets always have pulldowns.