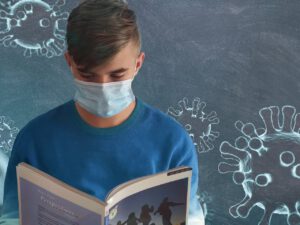 One reason for a $500 billion coronavirus relief package could be that many Republicans do not favor a relief package of $1 trillion. Senator Lindsey Graham previously noted that “half of the Republicans will vote ‘no’ on any more aid.”

So, one viable way to make fiscally conservative senators happy is to come up with a smaller coronavirus relief package. At $500 billion it is half of the HEALS Act, something with which Senate Majority Leader Mitch McConnell could gather support from the Senate Republicans.

Once McConnell gets enough support, he may force a formal vote on the $500 billion coronavirus relief package. “A formal vote means that senators would have to vote ‘yes’ or ‘no’ on a stimulus bill, which comes with its own optics particularly in an election year,” the report says.

Another probable reason for a smaller package could be to put pressure on the Democrats. Republicans know this very well that if there is a vote, they won’t be able to get it passed without help from Democrats.

If Democrats do support it, which is very unlikely, and the bill is passed, then Republicans can take credit for the legislation. And if there is no support from the Democrats, then the Senate can portray themselves as the side that came up with a new bill to break the stalemate but the other side is not supporting it.

Moreover, this smaller coronavirus relief package could give them some leverage in the upcoming elections. They will have something to talk about and blame Democrats.

Could it get Democrats back to the negotiating table?

One more reason could be to get Democrats back to the negotiating table. After the talks collapsed earlier this month, there haven’t been any real negotiations. This is because House Speaker Nancy Pelosi is not unwilling to budge from the $2.2 trillion package (she initially wanted more than $3 trillion).

The truth is that both sides want a stimulus package, and the same has been reiterated by Treasury Secretary Steven Mnuchin, Trump, Pelosi, and McConnell many times. One major point holding up the package is the cost of the bill. So, if Democrats believe that this $500 billion bill could tarnish their image, they may return to the negotiating table.

As per the reports, this smaller coronavirus relief package from the Senate would include $300 per week enhanced unemployment, $10 billion for the U.S. Postal Service, $250 billion for the PPP (Payment Protection Program) and $105 billion in school funding.

The post Why is the Senate even considering $500 billion coronavirus relief package? appeared first on ValueWalk.