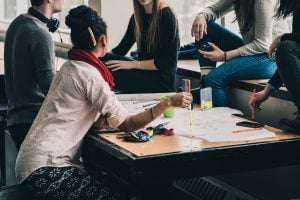 Today Most College Students Censor Themselves; Repression of Speech on Campuses Has Now Become Internalized

Most Higher Education Students Censor Themselves

WASHINGTON, D.C. (September 29, 2020) –   About 60% of higher education students admit to censoring themselves in everyday speech – about race, abortion, the Israel-Palestinian conflict and other topics – because of fear about how other students would likely react, and even this repressive climate for free speech is far worse at Ivy League institutions, according to a new survey by 20,000 full-time undergraduate students at 55 4-year colleges and universities.

Indeed, even years ago, some law professors stopped even teaching about rape in their criminal law courses out of this fear, reports public interest law professor John Banzhaf, who also notes that almost 20%  of students claim that it’s OK to stop a speaker, a view especially prevalent at Ivy League schools.

It’s gotten so bad that one law professor, who is female and a feminist, was even told not to use the word “violated” in her classes – even in sentences such as “the law violated the Constitution” – because of objections from female students.

So universities – which are supposed to be bastions of free speech, and the place where the free speech movement started – have become places where students feel it necessary to censor themselves out of fear of reactions by other students.

Punishment For The Smallest Speech Transgressions

Sadly, says Banzhaf, this climate of repression is fostered and encouraged by the universities themselves which often punish both students and faculty for even the smallest speech transgressions.

He cites two situations on his own campus where he fought back and won.

In the first, a student was suspended and almost expelled for very briefly displaying a ancient religious symbol revered by millions which another student initially mistook for a Nazi swastika.

In another, a student was forced to take down a Palestinian flag which he hung, like some many other students hang different flags, from his dorm window.

Prof Banzhaf notes that President Trump‘s executive order was supposed to protect free speech on campus by cutting off federal funding for institutions which violate it.

But it seems to have had little impact; in large part because students – unlike the hundreds of date-rape complaints filed under Title IX – do not seem to be filing any free-speech-violation complaints for the federal government to investigate, much less act upon.

The post Today Most College Students Censor Themselves appeared first on ValueWalk.