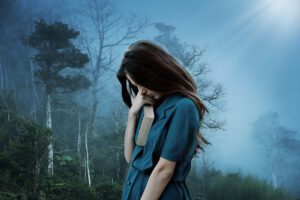 The most photographed woman in history: Marilyn Monroe.

The most photographed man in history: Adolf Hitler.

One preternaturally beautiful and singularly adorable.

The other pug-ugly and unfathomably cruel.

Both compelled every lense—human or machined—to relentlessly capture their image.

George Orwell wrote that if he encountered Hitler he would kill him.

But he could feel no personal animosity.

Many who worked with Monroe abhorred her behavior.

But quickly learned to keep such opinions private.

How did these two diminutive people cast such intense spells upon the world.

Both in life and long after death?

There is a single answer:

If you don’t know what mania is, rest assured you do.

You witness it countless times.

Irresistibly drawn to it.

The humor of Robin Williams, manic-depressive and drug-addicted, dead by suicide.

The passion of Frank Sinatra, manic-depressive and often alcohol-fueled, stupendously generous and violent by turns.

It is a sleepless, driven, pressured, magnetic, room-filling, dynamic and thrilling presence.

When coupled with talent or genius, mania can move, create, advance or destroy worlds.

The list of manic-depressive notables is breathtakingly long: many of the movers and shakers of history, art and science.

According to Nassir Ghaemi, MD, Harvard psychiatrist and author of “A First-Rate Madness,” at least four standout United States presidents were manic-depressive:

Of course, most manic-depressives are neither great nor terrible.

Most are just plain folks, without special gifts or talents.

But many are driven by mania to ceaseless work or creative expression.

A survey of poet-songwriters, only a few of whom achieved fame, found half to be manic-depressive.

Religious figures are both too ancient and too mythic to diagnose as possibly manic-depressive, but mania and religious ecstasy are often entwined.

Religious faith can deepen in mania or dissolve in depression.

Only to return as depression lifts.

And this raises the question, if all manic-depressives sought psychiatric care would we extinguish the fires of our writers, inventors, innovators, entrepreneurs, songwriters, playwrights, directors, producers, politicians and stars?

Well that’s like asking whether, if everyone decided not to vote, could we hold elections?

If everyone bought only index funds, could we have a stock market?

You don’t even have to think about it!

Because it is never going to happen!

Modern psychiatry seeks to save the suicidal, rescue the depressed, reduce the lure of self-medication in substance abuse and settle raging mania.

As best we can.

I am reminded of a celebrated author.

Then quit to experience a mania.

To fuel another bestseller.

Needless to say, if you’re on medication:

Don’t Try This At Home! Or Anyplace Else!

Not to mention all the social consequences:

Is manic-depression an illness, a mixed blessing or a gift?

To be sure, humanity would not be where it is today—for better or worse—without it.

The post The Power of Mania appeared first on ValueWalk.