Peter Lynch is probably one of the best-known stock pickers of our time and certainly among the most successful. He was portfolio manager of Fidelity Investments’ Magellan Fund for 13 years, starting out in 1977 with $20 million in assets and winding up his tenure in 1990, with more than 1 million shareholders and assets in excess of $14 billion. During that period, Lynch delivered an average annual return of just over 29 percent.

Lynch has served as executive vice president and director of Fidelity Management & Research Company and managing director of FMR Corp. He has also written three bestselling books on investing: “One Up on Wall Street,” “Beating the Street,” and his latest, “Learn to Earn: A Beginner’s Guide to the Basics of Investing and Business,”

I recently uncovered and shared a collection of articles that he wrote for Worth Magazine in the 1990s as well.

Peter Lynch’s Fascination With The Handbook Of Dividend Achievers

Peter Lynch has discussed his fascination with the Handbook of Dividend Achievers. A dividend achiever is a company that has increased dividends for at least ten years in a row. In the 1990s, this list of dividend achievers was printed in a book by Moody’s, and available for sale. I bought a few of these old books for my library. I am still fascinated by the fact how many of these companies from the 1990s are still around and still going strong, rewarding shareholders with strong dividend increases and total returns.

These are the words of Peter Lynch below:

“The reason that stocks do better than bonds is not hard to fathom.

As companies grow larger and more profitable, their shareholders share in the increased profits. The dividend are raised. The dividend is such an important factor in the success of many stocks that you could hardly go wrong by making an entire portfolio of companies that have raised their dividends for 10 or 20 years in a row.

Moody’s Handbook of Dividend Achievers, 1991 edition – one of my favorite bedside thrillers – lists such companies, which is how I know that 134 of them have an unbroken 20-year record of dividend increases, and 362 of them have a 10-year record. Here’s a simple way to succeed on Wall Street: buy stocks from the Moody’s list, and stick with them as long as they stay on the list. A mutual fund run by Putnam, Putnam dividend Growth, adheres to this follow-the-dividend strategy.

Whereas companies routinely reward their shareholders with higher dividends, no company in the history of finance, going back as far as the Medicis, has rewarded its bondholders by raising the interest rate on a bond.”

Those are powerful words in support of the dividend growth investing strategy.

I found an old copy of the 1994 Moody’s Handbook of Dividend Achievers. It listed the companies that were a member at the time, and sorted it by dividend growth.

You can download it from here: Dividend Achievers for 1994

It is fascinating to see how many companies on this list are still going strong.

There is still a booklet from Mergent Inc, which lists the dividend achievers. It is called Mergent Handbook of Dividend Achievers, but costs $82 for the Summer 2020 edition.

There are 286 companies on the list of dividend achievers. You can download an updated list every month from Invesco, which manages the largest ETF on the index.

There is an ETF on the list of dividend achievers, available from Invesco. The Invesco Dividend Achievers ETF (PFM) has 286 holdings, but costs 0.54% per year. At the current yield of 2.30%, this means you are paying close to 15% of dividend income in management fees per year.

These are the ten largest holdings right now: 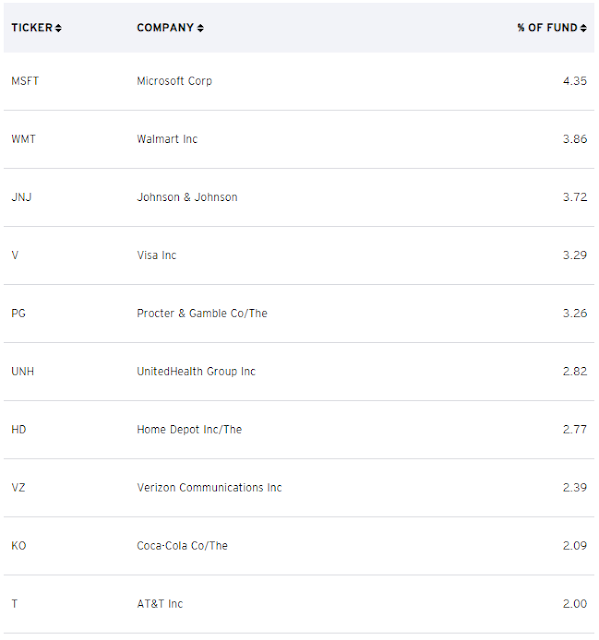 It looks like holdings are weighted based on market capitalization and free float.

Since the launch of the ETF in 2005, the distribution amounts has generally increased. The exception was during the Global Financial Crisis in 2008 – 2009. Perhaps this year would mark another time for dividend reductions too. 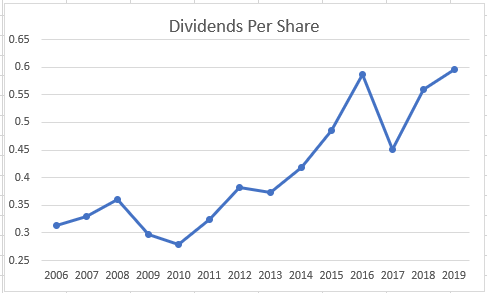 One of the biggest changes since Peter Lynch showed his admiration for the list of Dividend Achievers is the advent of the internet, which increased the access to information to everyday investors. Back in late 2007, David Fish started the list of Dividend Champions, and later expanded it to include all companies in the US which have managed to increase dividends for at least 5 years in a row. This list is still being updated monthly, after David sadly passed away at the age of 68 in 2018.

Of course, the list is just the first step in the process of looking for quality companies. The dividend investor may want to apply some sort of a screening technique for identifying the best ones.