Starting in early spring, as the coronavirus took hold, a conservative lawyer at the forefront of raising alarms about voting by mail held multiple private briefings exclusively for Republican state election officials, according to previously unreported public records.

The lawyer, the Heritage Foundation’s Hans von Spakovsky, is a leading purveyor of the notion that voter fraud is rampant, claims that have been largely discredited.

Among the participants in these meetings has been an official from the office of Georgia’s secretary of state; the secretary, Brad Raffensperger, recently elevated concerns about voter fraud by contending that 1,000 Georgians had voted twice in elections this year.

GOP congressional staffers and a Trump administration appointee have also joined in these meetings, which were open to officials from states across the country, including Missouri and Nevada, the records show. No Democratic state election officials appear to have been invited.

This article is part of Electionland, ProPublica’s collaborative reporting project covering problems that prevent eligible voters from casting their ballots during the 2020 elections. Learn more

The “goal” of the meetings, held remotely, is to “gather the chief state election officials together to strategize on advancing their shared goal of ensuring the integrity of the elections they administer in their home states,” an invitation to an early August event reads.

Most of the states declined to comment on the meetings, and it’s not clear what specifically was discussed. Von Spakovsky is highly influential in conservative circles. He has sent invitees copies of his published essays pushing for in-person voting and culling voter rolls as absentee balloting expands amid the pandemic, a situation that von Spakovsky argued will “make fraud far easier.”

The meetings come as voting access has become one of the central flashpoints of the upcoming presidential election. More Americans are expected to vote by mail this year than ever before because of the health risks posed by COVID-19. President Donald Trump has repeatedly and baselessly asserted that mail-in voting is rife with problems. Echoing von Spakovsky, he asserted on Twitter in July that the upcoming presidential vote will be the “most INACCURATE & FRAUDULENT Election in history.”

Experts have said voting by mail carries little risk of fraud. Since it is widely believed that more Democractic voters will vote by mail than Republicans, von Spakovsky’s proposals, if adopted, could suppress Democratic turnout in one of the most consequential presidential elections in a generation.

Secretaries of state, who oversee statewide voting and work with county election officials, have broad leeway to act in ways that can limit or expand the franchise. While most are partisan elected officials, they are expected to carry out policies that benefit everyone.

The Heritage Foundation did not make von Spakovsky available for an interview and didn’t address detailed questions about the meetings. In a statement, the nonprofit’s media director, Greg Scott, said election security was “crucial to our country’s future.”

“The Heritage Foundation is committed to making sure elections are free and fair,” he said. “Every eligible voter’s vote should be counted and not canceled out by fraudulent acts.”

The remote gatherings are an outgrowth of private, in-person meetings von Spakovsky has held with Republican election authorities each year since Trump took office, the records show. Participants have hailed from at least a dozen states, including battlegrounds like Ohio and Georgia. They typically dovetail with the national conference of secretaries of state in Washington, D.C., and take place at Heritage’s headquarters. Those pre-pandemic meetings did not primarily address voting by mail.

Jonathan Diaz, a lawyer for the Campaign Legal Center, a nonpartisan voting rights group, said it’s one thing for von Spakovsky to make dubious claims of voter fraud in public but “another thing entirely for him to be circumventing official channels and making these presentations in private, where they’re not subject to public scrutiny.”

Diaz added that election authorities need to be “transparent about the information they’re relying on to make decisions about the ballot.” 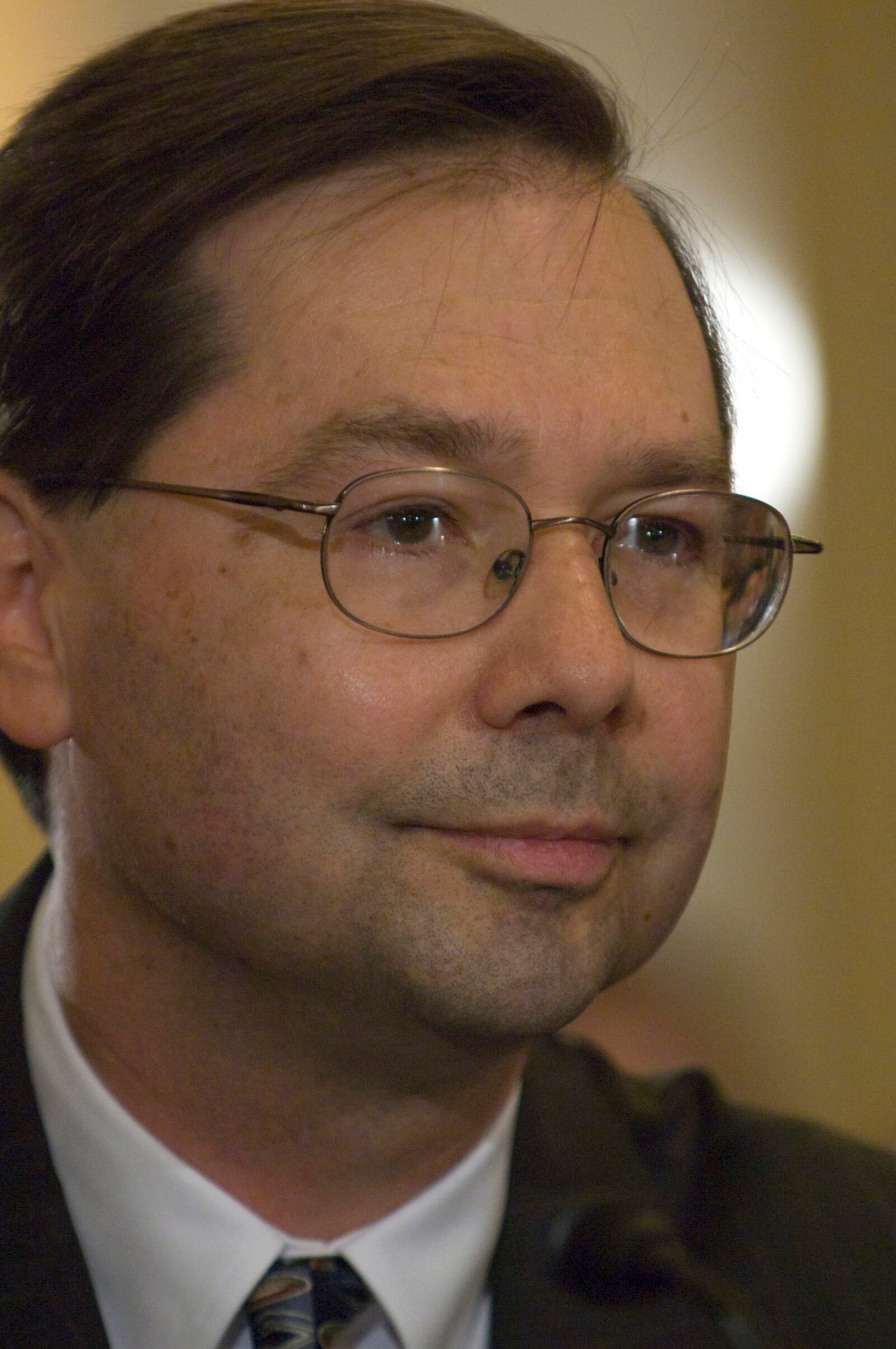 Von Spakovsky in 2007 at a nomination hearing to serve on the Federal Election Commission.
Douglas Graham/Roll Call/Getty Images

Von Spakovsky has hosted at least two of these remote meetings in recent months. In April, there was an hourlong “Election Administration Forum Conference Call” that covered, in part, the expansion of mail-in voting and “ways to message these concerns to your constituents,” according to the invitation. The event included the ranking member of the U.S. House of Representatives committee that oversees elections and five staffers, one of whom went on to work for the Trump campaign two months later. An August meeting, conducted through a secure, virtual video conferencing platform, was scheduled to last for two hours, according to an invitation.

A staffer from the Georgia secretary of state’s office participated in the April call. Before that, the secretary himself, Raffensperger, met with von Spakovsky in the summer of 2019 at Raffensperger’s request. At the Georgian Club in Atlanta, the two discussed a new law that involved replacing the state’s voting machines, according to Raffensperger’s deputy, Jordan Fuchs. That statute contributed to problems during what was widely viewed as a troubled June primary.

This month, around the time Raffensperger went public about double voting concerns in his state, he also appealed a federal judge’s ruling that the state must count absentee ballots postmarked by Election Day, the kind of policy change von Spakovsky has argued Democrats are using to “game the system” ahead of November.

“Hans, to our office, is the ultimate voter integrity activist,” Fuchs told ProPublica. While von Spakovsky “hasn’t driven any policy decisions” that have taken place under the secretary, Fuchs said that she briefed von Spakovsky on her office’s actions regarding double voting and absentee ballots.

There are indications that von Spakovsky has been influential within the Trump administration as well. During the August virtual briefing, state election administrators were told that Cameron Quinn, a Department of Homeland Security official, would now be their “liaison to the election community,” according to emails that a participant from Washington state sent to his colleagues.

Quinn has worked as an elections official in Virginia with von Spakovsky and has co-taught a law school course with him. During the meeting, she provided her cellphone number to the attendees.

The announcement of her role apparently came as a surprise to Washington officials, including the state’s director of elections, the emails show. The director, a member of a five-person committee that regularly interacts with DHS over election security matters, told her colleagues that there is a point of contact within the agency — and it’s not Quinn.

It turned out Quinn participated in the meeting without notifying her new boss beforehand, according to people familiar with the matter. Her appointment to the Cybersecurity and Infrastructure Security Agency, a division within DHS that monitors election systems for foreign hacking attempts and communicates with state officials about them, had only been announced within the agency a day earlier, they said.

It’s not clear whether Quinn is still in contact with state elections officials. A division spokeswoman confirmed Quinn was not yet an employee in the division at the time she participated in the meeting but declined to answer additional questions.

Beyond Quinn, it’s not clear whether any executive branch officials have participated in von Spakovsky’s remote briefings. But in 2019, during his annual in-person gathering, the then-head of the Department of Justice’s Civil Rights Division, John Gore, and its chief of staff and counsel, Omeed Assefi, attended in their official capacities, according to an attendee list.

The division is responsible for protecting the rights of voters. An agenda from the event shows that Gore and von Spakovsky led an hourlong discussion on “election reforms in the states and messaging and update on civil rights division, U.S. Department of Justice.”

“This is highly inappropriate,” Vanita Gupta, who ran the division under President Barack Obama, told ProPublica. “That kind of closed-door session, where a head of the Civil Rights Division is secretly speaking about enforcement with partisan state officials, is unprecedented. The DOJ isn’t accountable to just one party.”

At the Heritage Foundation, von Spakovsky maintains a database of voter fraud cases and, emails show, regularly urges secretaries of state to contribute to it. At the moment, the database encompasses some 1,300 cases, stretching over a period that begins in 1982. As Reuters recently noted, billions of ballots were cast during that time.

Von Spakovksy’s writings on voter fraud carry the veneer of academic research. But when he was questioned about his work in a trial two years ago, he testified that none of it has undergone the stringent vetting process of peer review. The judge in that case dismissed his testimony, saying it was “premised on several misleading and unsupported examples” and included “false assertions.”

Before coming to the Heritage Foundation, von Spakovsky served on both the Federal Election Commission and in the Department of Justice’s Civil Rights Division, where he drew scrutiny after approving a voter ID law in Georgia that a federal judge likened to a Jim Crow-style poll tax. In May 2017, Trump appointed von Spakovsky to a voter fraud commission that disbanded less than a year later without producing any evidence of voter fraud.