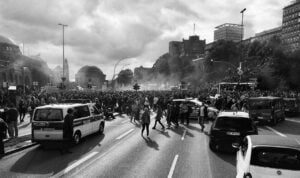 WASHINGTON, D.C. (September 7, 2020) – In an effort to expose alleged policy brutality, about half a dozen protesters in Rochester staged a stark protest by briefly appearing naked, except for spit hoods, to dramatize the situation under which Daniel Prude was arrested.

Although there appears to be no general constitutional or other right to be nude in public places, these protesters may be able to claim Free Speech protection in situations such as this where the exposure is directly related to the message they are sending and there is no public disruption, says public interest law professor John Banzhaf, a First Amendment expert.

Banzhaf notes that nudity has served as a form of protest since at least the 11th century, when legend holds that Lady Godiva rode naked, veiled only by her long hair, on a horse through Coventry, England, to protest oppressive taxation.

Portland, another city where alleged police brutality is also being protested, provides a more up-to-date example.

Interestingly, Oregon state law, like some other jurisdictions, does not prohibit nudity per se. To be charged with public indecency, a person must be engaged in a sexual act or have “the intent of arousing the sexual desire of the person or another person” – something clearly not the case in this brief Rochester. protest

Although Portland does have a stricter local ordinance, a Multnomah County judge, in 2008, cleared a nude bicyclist of indecent exposure charges, saying cycling naked had become a “well established tradition” in Portland as a form of “symbolic protest.”

Several years later, a man – who wore a sign in court labeling him as “Sir Godiva” – was acquitted of similar charges by a judge who interpreted his stripping naked at Portland International Airport as a legitimate form of protest against Transportation Security Administration procedures.

The judge cited a 1985 Oregon Court of Appeals ruling stating that nudity laws don’t apply in cases of protest.

Opponents of applying the First Amendment’s Freedom of Speech protection to public nudity, even when designed to send a message, might point to a 9th Circuit decision which held that public nudity is not inherently expressive, as “body freedom” advocates had claimed.

The court noted that the anti-nudity statute served substantial public interests in protecting individuals “who are unwillingly or unexpectedly exposed” to public nudity and preventing “distractions, obstructions, and crowds that interfere with the safety and free flow of pedestrian and vehicular traffic.”

However, even that court did concede, says Banzhaf, that nudity may in some circumstances constitute expressive conduct protected under the First Amendment.

The Rochester situation, where the nudity was very brief, directly related to an important current public issue, designed to attract media attention rather than arouse or offend bystanders, and done where video shows there were no bystanders or casual observers who might inadvertently be exposed to nakedness, could well constitute the very circumstances the court was referring to, argues Banzhaf.