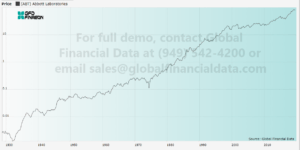 Grace Groner is one of the most successful dividend investors out there, on par with Anne Scheiber and Ronald Read. She definitely fits the humble origin narrative, and the fact that she managed to generate a large fortune with a simple investing strategy.

Grace Groner and her twin sister were orphaned at the age of 12. They were taken by a rich family, which paid for their college education. She graduated in 1931, and took a job as a secretary in Abbott Laboratories.

She never married, and lived a simple and frugal life. Grace was willed a home, which she lived for the rest of her life. Grace got her clothes from rummage sales, walked rather than buy a car. She felt no urge to keep up with her neighbors. Though Groner was frugal, she was no miser. Grace traveled widely upon her retirement and occasionally funneled anonymous gifts through Marlatt to needy local residents. She had a gregarious personality and plenty of friends. She remained connected to her college, attending football games.

Ms Groner worked as a secretary at Abbott Laboratories for 43 years. She invested $180 in 3 shares of Abbott Laboratories (ABT) in 1935. These shares split multiple times, and paid a dividend throughout her investment journey. She then simply reinvested the dividends for the next 75 years. She never sold, but just held on to her shares.

Grace Groner turned that small $180 investment in 1935 into $7 million by the time of her death in 2010. Based on my calculations, this investment was generating $210,000 in annual dividend income.

She left the money to her foundation, which you can read more about here.

The Power Of Compounding

Turning $180 in $7 million over a period of 75 years is a very high return on investment over a long period of time. She took full advantage of the power of compounding over long periods of time. As we noticed with the story of Ronald Read, most riches are generated at the tail end of the investing journey.

It looks like Grace retired in 1974 from Abbott, after a 43 year career starting in 1931. This means that when Grace Groner retired in 1974, she was 65 years old. She did not have the $7 million sitting neatly in a bank account for her whole life. Rather, she wasn’t even a millionaire for at least 13- 14 years of her retirement. She didn’t probably even have to think too much about her legacy, until sometime in the 1980s, when Abbott really started compounding at a high pace of return.

Based on my research, it looks like that the Abbott Labs stock price alone jumped 100 times between 1975 and 2010. This means that when she retired at the age of 65, her position in the stock could not have been worth more than $70,000 to $100,000. This was an impressive amount in 1974, but not life changing money. Given Grace’s frugality, she probably lived on Social Security and a corporate pension, with the dividend income from Abbott being a safety net for her just in case.

I am just looking at the stock price chart, but it looks that she probably didn’t even become a millionaire until 1987, when she was 78 years old.

The success was dependent on several important factors:

3) Stay invested for decades, without selling

4) Keep reinvesting those dividends along the way

There is a large dose of luck involved in this investment of course. After all, it is generally not very good idea to invest money in your employers stock. That’s because if your employer has troubles, you are likely to get laid off at a time when their stock price is lower as well.

In addition, it is generally not a good idea to have most of your net worth in just one stock. While these stories never provide full information about Ms Groner’s portfolio, it does make us believe that it was in just one security – Abbott Labs. If she had worked at Enron for example, there would have been pretty much nothing left. For ordinary investors like you and me, the best course of action is to have a widely diversified portfolio.

She was frugal, having grown up in the depression era, and was the classical millionaire next door type of person who was not interested in keeping up with the Joneses. Grace Groner left her entire fortune to her Alma Mater. Her $7 million donation was generating approximately $210,000 in annual dividend income in 2010.

Ms Groner left the money to charity, which was to use the income to fund its programs.

I am not sure how the institutions invested the money after 2010.

Let’s assume that the institution kept those shares, and just spent the dividend income. I crunched some numbers and came up with the following amount of actual dividend income 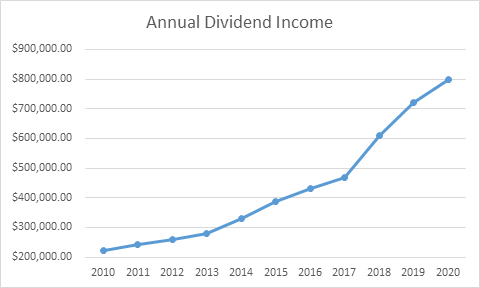 The portfolio would be worth $25.20 million today. Not a bad amount from a single smart investment 85 years ago.

Multi-generational wealth is possible, we just need to get the snowball rolling, and the trust documents filed correctly.

The post How Grace Groner Turned $180 in $7 Million by Investing in Dividend Growth Stocks appeared first on ValueWalk.